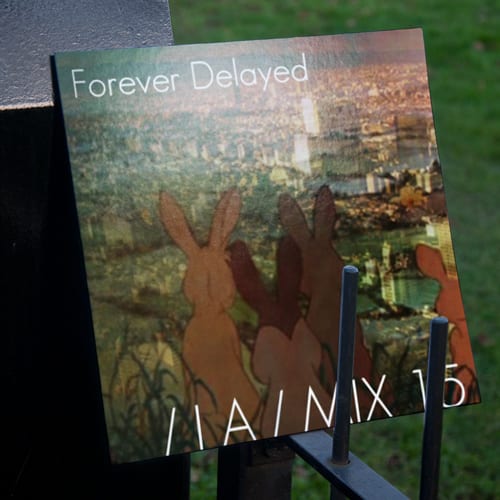 Our fifteenth exclusive IA mix comes from ‘Forever Delayed’. Forever Delayed is ‘Staffan Linzatti’s’ newest project. For the past decade Staffan has been producing club orientated minimal and techno music, but as “Forever Delayed”, this is an entirely new project for the Swedish producer.

With his new moniker Staffan has totally shut out his previous musical aesthetic and has essentially created a place where he wants you to disconnect from time and space and shift your thoughts towards what you feel, its totally intrinsic. Inspired by watching people on the move, Staffan constantly tries to push his own limits.

”Watching people at a café or sitting by a busy street reminds me of how little time we have, and that future is always upon us”.

His passion for electronic music is deeply rooted within his head; it’s like it’s a form of therapy for him. The drive towards obliterating boundaries and developing new forms and structures in sound is not only a way for him to express his creativity.

”I love to hear and watch things that are hard to recognise, whether that being a sound or an image. Working in the studio helps me clear my head”.

His self titled ‘Forever Delayed’ debut album is available on ‘Islands & Islets‘, sister label to Pär Grundvik’s record label Stockholm Ltd. Stockholm Ltd are central to Sweden’s electronic music scene, having been behind artists such as Fever Ray, Van Rivers and The Subliminal Kid.

Staffans inspiration behind this mix was spurred by the British animated film ‘Watership Down‘ by Martin Rosen [1978], based on the heroic fantasy and political novel about a small group of rabbits, written by English author Richard Adams [1972].

“I wanted to make my own interpretation of the soundtrack for the movie. After re-watching the movie I sat down and started putting together tracks I thought would fit specific scenes in the movie. The idea was to capture the themes and drama of the movie with music I find inspiring.”

IA: Hi Staffan, firstly thank you for taking the time to answer our questions and secondly thanks for recording the mix exclusively for IA.

SL: Hello, It was my pleasure. I had a lot of fun recording it.

IA: Firstly can you tell us a bit about yourself, where you’re originally from in Sweden and how you first got into listening and recording electronic music?

SL: I was born and raised in Eskilstuna, a medium sized town near Stockholm. My first introduction to electronic music came from my brother Mathias. My first steps in the world of recording came a few years later. Me and Mathias still work together.

IA: In your youth what record labels did you aspire to release music through?

SL: I wasn’t really thinking in terms of releasing music when I was starting making music. It was all about having fun with my brother.

The process of creating something was always more interesting than the actual results. And since I hadn´t really started buying my own records back then I didn’t really know too much about labels and stuff.

IA: From your discography we can see that you have primarily focused on producing club orientated minimal and techno, what stimulated the realization for your ‘Forever Delayed’ project.

SL: The “Forever Delayed” project is something that has been growing inside my head over the years. However, the triggering point came soon after a quite dramatic change in my life occurred. I guess one could say that “Forever Delayed” is everything and anything I imagine.

IA:  Can you explain to us your relationship with Par Grindvik and your involvement with ‘Stockholm LTD’?

SL: Pär and I are very good friends. We have been working together for the last 5-6 years and since I moved to Berlin we bounce ideas of each other, drink a lot of coffee and recently we started working together under the guise “The Rumours”.

IA: Musical genres come and go, some would argue that at in the UK we are experiencing an overhaul of bass music, dubstep, broken beat, UK Funky…What music do you personally find the most interesting?

SL: I want to hear music that challenges and inspire me. It doesn´t really matter what genre it is. Timelessness is also important for me. I like the idea of watching a movie and listen to the music composed for it afterwards.

IA: From what I have read, Islands & Islets mission is to “create something new and unique that has roots in our physical realm.” Do you think that Forever Delayed has stayed true to this?

SL: I do believe so. Forever Delayed is about transforming my emotions and thoughts into music.

IA: In terms of production, what have you learnt from producing your full-length album ‘Forever Delayed’? Has this been a therapeutic mission for you?

SL: It was a therapeutic mission indeed. That was actually the reason I wrote the album almost two years ago. I needed to leave something behind, and make way for something new.

The music I wrote for the album is my confrontation with the feelings and emotions that was stirring in my mind during the time of this change.

IA: Is ‘Forever Delayed’ a one off musical project of yours, or will you continue to produce under this moniker?

SL: As long as I have stories to tell “Forever Delayed” will live on.

IA: Who is behind the albums artwork and how did this come about?

SL: The brains behind the artwork is a good friend of mine, Emma Ekstam. We’ve known each other for a few years now. The idea of asking her to illustrate the music originated from my brother Mathias. I instantly fell in love with Emma’s work.

IA: What inspires you to create music, sitting in a cafe drinking espresso’s absorbing people’s auras and moods? Or is it a reflection of what’s going on in you?

SL: A combination of both. I always have a concept when I create music, Something I want to describe, or shed light upon, being an idea from a book, a movie or just about anything I want to translate into tones. It is the idea, the seed of a thought or reflection that sparks the process.

With “Forever Delayed” for example I needed to create something for myself. I never really meant to share the album with the rest of the world.

IA: What musician or producer is totally blowing you away at the moment?

IA: What’s next for you?

SL: Right now we are working on the manufacturing of the “Forever Delayed” album with. Everything is being done by hand so patience is a virtue. I also just recently finished an EP with my brother. Pär and I are also setting up some guidelines for our “The Rumours” project. A few new “Forever Delayed” ideas are shaping up as well, and of course I am constantly doing music under my real name – with releases coming up within the next months.