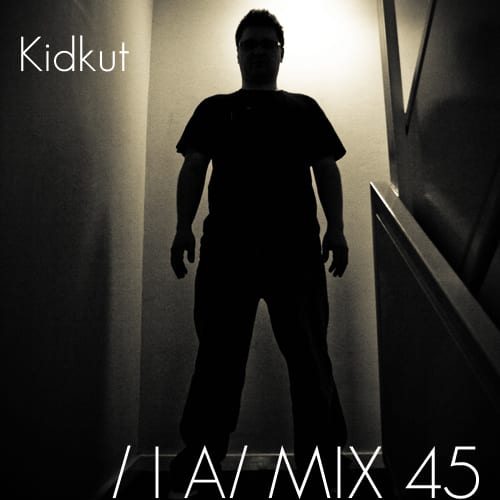 Adam Jackson AKA Kidkut, label boss of Immerse Records has been heavily involved in Bristol’s dubstep scene from the get-go, putting on nights alongside dubstepforum moderator ThinKing, and also releasing the likes of Benga, TRG, Forsaken, Kontext, Arkist, Sigha and El Kid on his Immerse Records imprint.

With Immerse approaching their 30th release we decided catch up with Adam to find out what drives a person to start up their own imprint in such a vibrant and fast moving electronic music scene. He’s also served up a deep vinyl mix brimming with bass-driven house music, a mix which he describes as a ‘Bristol showcase of sorts’. His mix features forthcoming records from Outboxx, Vessel and October + Borai, which will be released across Immerse, Idle Hands and Apple Pips.

My name is Adam Jackson, I produce and DJ under the guise of ‘Kidkut‘, I run Immerse Records and also co-run BRSTL with Chris Farrell. I’m originally from Norwich but have lived in Bristol now for 14 years so count this as my home. I had absolutely no idea what I wanted to do when I grew up, I wanted to be a Park Keeper when I was four but I like to think my aspirations are a little higher now, although I could probably do with with getting out of the studio more.

How far back does your interest in electronic music stem and what motivated you to start a record label?

My interest with electronic music goes back to when I was 12 (1991). I was living in Milton Keynes at the time and the older brother of one of my mates used to buy the ‘Dreamscape’ tape packs, copy them and sell to all the local kids. You could buy individual tapes or whole packs. When I turned 13 I went to my first rave (Dreamscape 7), things were a lot more laid back then and the same brother knew the door staff. From that point on I was completely taken by it and got my first set of decks when I was 15. I’ve been DJing now for 17 years.

I started the Immerse label back in 2006, I had been running parties with different people in Bristol for a few years before and had a lot of good unreleased material. I felt like starting a record label was the next natural step for me really as I had been involved with music in most other capacities.

Your label Immerse has proved itself as an abundant source of enterprising new music, signing meticulous talent before they have reached the limelight. How do you define the label’s ethos, and how would you explain your A&R process?

I was speaking with Chris about this the other day, although I’m not keen on his recent output I think it’s quite crazy that ‘Benga’ (alongside Walsh) was on the first release, given where he is today. I’m not sure I can explain the ethos really, I would say it would seem quite erratic at times, I do listen to a lot of music and the label in the past had always been a reflection of what I was listening to six months previously.

We have signed a lot of different artists for their debuts but that hasn’t really concerned me, I think there has always been a consistent level of quality to what we put out. Things have changed somewhat in the last 12 months, there is more of a purpose behind it now in that I decided I wanted to use the label as an outlet for local artists within our growing house and techno scene, which I can think you can see from the ‘Outboxx’ release (ime025) onwards. It’s an area that I’m involved with heavily, it’s what I am very much focused and interested in and trying to support in any way that I can.

Yes, although it’s quite a departure from how I would normally go about putting a mix together so was actually quite a challenge. I wanted to put a mix together of a Bristol showcase of sorts, music by artists or labels from the area. There’s been bits and pieces mentioned about the scene but I think anyone outside of Bristol probably wouldn’t be aware of the actual music we are talking about and at the end of the day, the music is the focus.

It’s an all vinyl / acetate affair. I usually keep the acetate for live play only but again wanted to show what people are working on and making at the moment. There are many more artists and labels that I wanted to include but couldn’t squeeze everyone in, there’s plenty more for people to discover!

Bristol’s musical heritage runs deep and a great deal of talent has developed in the city, where do you think the inspiration lies?

I think the reasons behind it are twofold, a huge student population (around 25K), which means an influx of new people every year and the sound system culture that’s been here for decades. I think the latter, plus the bands / artists that Bristol are renowned for certainly mean that a good portion of that 25k that come to Bristol for the music are coming with a certain mindset and generally that fits in with what we already have here, because that’s what they are looking for. It’s not a big place at the center, just very spread out, so it’s very easy for people to meet up.

What are your instruments and softwares of choice when producing music?

Over the last twelve months I’ve moved from using Logic to using outboard gear and Logic just to record and edit. I have a good selection of synths, I guess the Pro1 is my favourite but I also have an ‘Emax’. Takes me ages to write music via this method but I find it a much more intuitive, creative process and a lot more fun. It’s been quite a challenge learning it all but nothing worth doing is ever easy, which I think people tend to forget. I like the warm, dirty sounds I can get out of these machines, if I listen to some of my past music now (produced 100% on software) it just sounds far too clean and soulless to me, but it’s definitely something you wouldn’t pick up on unless you spent some time with analogue.  You need to train your ear to the difference, some people would argue that point but that’s my opinion.

What are your top three albums?

Oh well, given what I grew up on it would probably be more appropriate if I choose three tapes so I’ll go with:

Where have you been playing over the Summer and Autumn months, and have you got any releases in the pipeline?

Various places in the UK, I’m playing in Bristol this Saturday at the Bank with Chris Farrell and Shanti. There’s quite an old tune I did with Gatekeeper about 2 years ago which I think is coming out on Apple Pips, as for music that’s more in line with what I’m doing these days you will have to wait and see!

What do you enjoy doing when your not pushing records or signing music?

Well, I am an avid Norwich City supporter so very much into my football, first season back in the Premiership and we aren’t doing too badly. I play a few Xbox games here and there. To be honest, nearly all of my time is either writing / playing music, managing the labels or going out to nights to catch more music – I have a very understanding girlfriend!

What do you see as the prominent music genre’s in Bristol’s underground electronic music scene this year?

Bristol is still a big dubstep and dnB city but certainly the best parties I have been to this year have been focused around house and techno, Dirty Talk with Kassem Mosse, John Osborn, October and Kowton this last weekend gone was great. We started our own locals only night ‘Western Union’ with this ethos, next one is this Friday 25th Nov. I think the way things are going it will just see this scene grow and grow.

What are you listening to at the moment?

I’m really enjoying the sound track to the recent Drive film with Ryan Gosling. So bits and pieces of ‘Italo’ off the back of that, Glass Candy Beatbox album, that kind of thing.