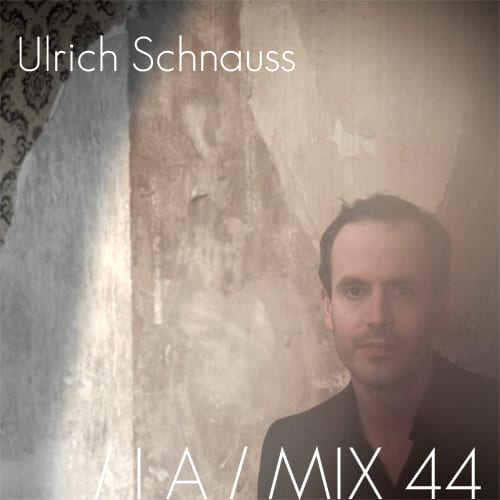 Ahead of his highly anticipated Acid/Bleep DJ set at the Inverted Audio & 44 Christmas Party, we are proud to present the 44th IA mix from Ulrich Schnauss. His mix investigates a ‘more abstract, atmospheric side of early electronica’ made up of his favourite tracks from the late 80s and early 90s including tracks from A Guy Called Gerald, Orbital, LFO, Ju-Ju, Rising High Collective, K-Klass and many more.

We also discover more about his musical background and career, his early movements into music production and the equipment he was using to produce it. He also reveals details about two forthcoming releases slated for release in 2012.

My name is Ulrich Schnauss and I’m a musician, producer and remixer. I was born in northern Germany in a coastal town called Kiel – I moved to London about five and a half years ago.

What three things have inspired you the most in life?

My favorite music, all kinds of experiences and interactions with other people as well as the places I’ve spent time and/or lived in.

What music were you listening to in your teenage years? Which artists have been prominent in the development of your personal taste in electronic music?

I started developing my music taste in the late 80s and early 90s – electronic underground music and the more ethereal, dreamy styles of indie rock that were around in those days have been equally important. During the same time I had a bit of musical ‘awakening moment’ through discovering Tangerine Dream – this made me realize that I could make the music I had in my head using electronic instrumentation.

When did you start to experiment and record electronic music, what equipment were you using back then to produce sound?

Around 1990 or ’91 I got my first Yamaha keyboard. It had about 100 preset sounds and an inbuilt 8 track sequencer which allowed me to record some very basic pieces. Roughly 3 years later I purchased my first sampler, an ‘Ensoniq ASR10′ and my first ‘Crumar Bit One‘ synth.

How did your relationship with the record label ‘City Centre Offices’ develop?

in the second half of the 90s I mainly recorded drum and bass tracks (like most people who later on released electronica albums on Berlin based labels such as Morr Music or City Centre Offices) – Thaddi, the head of cco was running a weekly dnb radio show which slowly turned into a meeting point for local producers. When I switched from dnb to electronica we continued to keep in touch and he seemed to like the musical results I was coming up with.

People have associated your music to notions of the sublime? – What’s your opinion on this?

I think when you expose something that you’ve created to a wider public (whether it’s a photo, a piece of music or a text) you have to learn to live with the fact that you’ll get confronted with a wide range of interpretations of what you’ve done – some of them even contradicting your initial intention.

At this point I actually find that fascinating rather than disappointing – you can play the same piece of  music to 100 people and you’ll receive 100 completely individual reactions to it. More than a few people seem to think my music is ‘optimistic’ and ‘happy’ – nothing could be further from the truth – my idea has always been to create a sonic utopian counterpart to a reality that I perceive as grim and hostile – but like I said: If some people choose to listen to things differently I certainly wouldn’t hold it against them.

Can you expand on your philosophy on sound design?

You can use electronic instrumentation to imitate existing natural sounds or you can use it to develop a completely synthetic, artificial aesthetic. For me personally a third option always seemed to be the most fascinating: sounds that carry the warmth and dynamics of ‘real instruments’ while avoiding to be too close to their natural counterparts – this way it is possible to use even fairly conventional chordal movements without connecting them to the cultural baggage and preconceptions that (as an example) the sound of an acoustic guitar carries.

In production terms, what instruments are you using more and more in creating your tracks and what’s your opinion on analogue versus digital?

I think there’s some tragic misconceptions around as far as the whole digital/analog debate is concerned. a lot of textures I’m using that people associate with analog synths (warmth, depth) are actually made with digital equipment. I’m using a lot of wavetable instruments from companies such as PPG, Waldorf or Ensoniq. Then again an analog classic such as the Rhodes Chroma is actually capable of producing some strikingly metallic, sharp tones that would probably be associated with ‘digital’. Both types of instruments can create a wide range of colours – what the final result will be simply depends on the programmer as well as the instrument.

However, I would agree with one criticism concering digital equipment: I don’t see the point in using this technology to replicate analog instruments, the results usually fall short of the ‘real thing’ without using the amazing possibilities that digital technology can provide.

What factors influenced you to move to London? – What was your initial experience with integrating into the city; did you ever have the feeling that it was the wrong idea?

I’ve always wanted to live in a truly multicultural environment – Berlin pretty quickly gets provincial and narrow minded once you leave the modestly cosmopolitan hipster areas in the very centre (an assessment that can easily be applied to Germany as a whole). I haven’t regretted moving to the UK for a single moment so far – even today I’m still grateful to live in a city that (in comparision) is so open and diverse.

What environments do you prefer to create music in? – Do you long to be in an urban environment or surrounded by nature?

Definitely an urban environment – I need to feel reasonably safe in order to be able to develop those ideas of a utopian anti-reality that I was mentioning beforehand. I do like natural landscapes and nature, actual village life makes me feel claustrophobic and paranoid.

Is your music reflective of the environments in which you create it?

Yes, definitely. I find the reality of our existence quite depressing – the way we organize our societies is deeply unjust and unfair.
Rather than developing a progressive critique that focuses on the completely rational and non-personal mechanisms that perpetuate capitalism, the so-called opposition is inhibiting awareness by spreading conspiracy theories and esoteric nonsense.

I can discuss and debate these issues with friends and colleagues but as a human being I also need music to emotionally cope with all the darkness. Listening to a great piece of music or expressing your feelings through composition is like self therapy – it’s the only thing that gives me strength to continue.

To date you’ve released four albums, are you working on new material and if so what can we expect?

I’ve completed a collaborative album ‘Underrated Silence’ with my friend Mark Peters that will be released on Bureau B in February 2012. I’ve also just recorded the last song for my upcoming solo record, ‘A Long Way To Fall’,  which should follow around March/April.

What can we expect from your Acid/Bleep DJ set at the IA & 44 Christmas Party?

I always really enjoy playing my favourite records from the late 80s/early 90s – I was too young to go out then and even if I tried there probably wouldn’t have been any parties for this type of stuff in the area where I grew up. So that’s essentially what it’s about for me: listening to classic tracks from an era when electronic dance music was still a true underground movement and anything seemed possible.

Can you please explain the mix you have recorded, your selection of tracks and the overall atmosphere you have created?

At the actual party I’ll probably focus on some more dancefloor friendly stuff – this mix investigates a slightly more abstract, atmospheric side of early electronica – more like the kind of records I would put on at home when I’m in a sentimental mood.

Apart from music, what else do you spend your time on?

I try to find time to read – and i also enjoy following what’s happening in film when I have an opportunity to. I also find that walking through town can be inspiring as well as it helps to clear the head.

The dream is always the same.