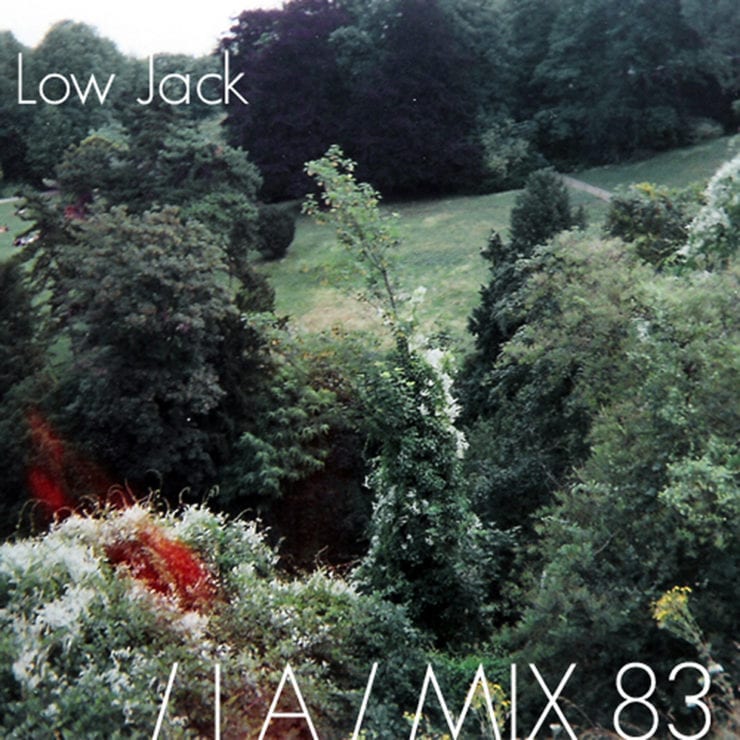 Low Jack first came to our attention when a copy of his debut ‘Slow Dance EP’ was picked out of a crate over at Kristina Records by an IA team member. After a few listens to the crawling, clanging beats, moving sleazily from some Chicago basement towards an undefined electronic future, we decided to get in touch for a chat and a mix. The unnamed Parisian delivered a straight-up jacking house selection for us, that jumps straight in at peak time. Download and streaming links are below, so without much further ado – Low Jack.

For those who may not know, could you please introduce yourself and tell us who you are, where you’re from and what you’ve been up to recently?

My name is Philippe, I’m living in Paris, producing house music or whatever and fascinated by all this noise/indus/fucked up techno thing. Recently I’ve been getting ready for my live show and preparing a bunch of EPs which are coming out soon.

Your debut EP, ‘Slow Dance’ [Get The Curse], has been drawing some attention already. Can you describe it for us? What was its premise?

These tracks were produced in 2011. At this time I was trying to do slow disco warm-up style with a friend and it became a bit painful, so I decided to start something on my own. Something more spontaneous and free for me, based on live sessions with my voice and synths.

The tracks all nod to tropes of classic dance music styles, while looking forward to innovation – how do you think about the balance between past and future?

Oh thanks guys! This good balance between past and future is practically an obsession for me. I love music and discovering some new exciting stuff as much as buying old dance music. Guys like Cristian Vogel or Matthew Herbert who were basically making funk music but with a modern Berliner twist super impress me. At my small level I try to take inspiration from that.

What were your early musical experiences? How did you get into electronic music?

I used to play the guitars and drums. I even had a pretty silly and politically engaged band in high school as a lead guitarist. Later at the age of 16 or 17 I went all about hip-hop and at that time I bought my first turntables. I was a bit nerdy but not that much, I liked to spend my free time on the internet, reading forums and stuff.

In 2003/2004 when you were into stuff like Dizzee Rascal, Cannibal Ox or Ludacris, the bridges were pretty open to be able to discover ghetto-tech music with artists such as DJ Godfather, Mr. DE. From this, I progressively got into more European electronics, especially artists like Errosmith, Soundhack, Cristian Vogel, etc.

All the tracks have a certain analogue feel – is this something you achieve with hardware or software? Can you say anything about your production style, or what your concerns are when producing?

Well I would love to buy gear every day. But for now I can only afford the cheapest machines. I’ve got my microphone, this 707, a somewhat crappy 8 channels mixer, some guitar effects and my Juno Alpha.  Actually I feel it’s ok for the music that I’m trying to do. But it would be a lie to tell that I’m an all pro-analogue guy fighting against the use of Ableton live. I love using softwares. Whatever as long as it’s sounding good. I know there are some producers who are using Fruity Loops like Gerry Read or Bambounou and to me they are more interesting than producers with 20k euros studios.

How did you get involved with Get The Curse Music?

I first met the people behind the label a few years ago and we quickly became friends. I like to hang out, go to the movies with them or cook for them. So it was pretty easy to give my music to Clement Meyer, the man in charge.

What are your thoughts about the electronic music scene in Paris? What labels/artists are you excited about?

Paris is getting hot right now. The record shops are full of kids. A lot of great promoters & venues are making the business like le Zero Zero, Gazza, Concrete, Sonotown, Activist Party, etc. In regards to record labels I’m really into Antinote, In Paradisum, DDD. And in my opinion THE hottest DJ in Paris is by far my good friend Alberto Balsalm from Acid Arab.

How much of Paris is in your music? How do you feel your environment influences your production?

I really like the city; most of my good friends are living here. I like digging records at Betinos or Syncrophone. So I guess yeah it probably influences my productions in some point.

For that matter, what would you list as influences, within music and outside?

To be honest, listening to music, not only the records but also clubs and live settings, mostly influences me and more generally by all the ways music relates to states of trance. Actually if I have to refer to an extra music influences, it might be a bit cliché, but there was this amazing exhibition at Le Quai Branly during the summer called “Masters of Disorder” about various forms of shamanism.

Tell us about your mix – we love the fade-in, like a peak-time live recording – is this a ‘live’ style mix, or more of a conceptual thing?

Yeah thank you guys, you totally get it. That’s exactly what it is. I recorded it live. My turntables, my mixer, a CD-J and some records for the clubs. Sometimes it’s a bit messy as the selection wasn’t really prepared, but that’s the way I like to mix.

How did you go about selecting the records you’ve used in your mix?

It’s basically a mix almost entirely focused on house. I tried to mix up some old stuff like this crazy Cajual Records track with lot of more recent stuff from labels like Mathematics or AIM.

Are there any other projects in the pipeline that you’re excited about?

I’m performing live for the very first time in Paris in a few weeks, at La Gaîté Lyrique alongside Andy Stott, Perc & Mondkopf. There is also an EP on Delsin to be released in January. I have a bunch of new tracks ready to come out later on In Paradisum and elsewhere.