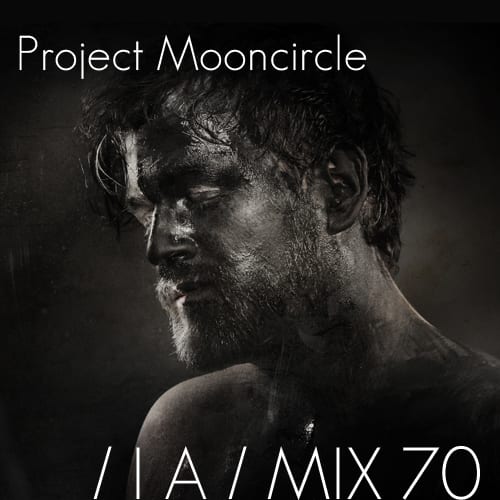 For our 70th IA MIX we invited Gordon Gieseking, label founder and co-owner of Project: Mooncircle, Project Squared and Finest Ego to record a mix. Gordon has named his mix “Monochrome”, here is why:

“In a dismal black-and-white movie or image one can still find the warmth of colors, especially as the whole environment heavily influences the perception of such a movie or image. These thoughts were unvariably accompanied with contemporary music and this Mix for Inverted Audio has been inspired by many black-and-white images. I’ve tried to include plenty of releases from the labels Finest Ego, Project Squared and Project: Mooncircle because they are the food for my thoughts…” – Gordon Gieseking

Project: Mooncircle specialises in music that lies between the electronic and organic spectrum. Gordon is also label and distribution manager at hhv.de and broadcasts his own radio show on BLN.FM in Berlin. His main duties are A&R, accounting and helping out his coworkers Jinna Morocha, Karolina Kaczor, Malte Tarnow & Paul Cooper. For the past 10 years Gordon has worked tirelessly on Project: Mooncircle and is responsible for releasing records from Robot Koch, Bougaloo, Seven Star, Mr Cooper, Onra, Rumpistol and Sweatson Klank.

Tell us about the mix you’ve recorded for Inverted Audio – The inspiration behind the track list and overall atmosphere created within?

In a dismal black-and- white movie or image one can still find the warmth of colors, especially as the whole environment heavily influences the perception of such a movie or image. These thoughts were unvariably accompanied with contemporary music and this Mix for Inverted Audio has been inspired by many black-and-white images. I tried to include plenty of releases from the labels Finest Ego, Project Squared and Project: Mooncircle because they are the food for my thoughts.

What’s the story behind the coining of the name “Project Mooncircle”?

We created the name in 2002 and the concept is: “Looking at the world from above and watching all the good things and problems we creatures build or destroy on this earth we inhabit.”

When you initially founded the label, did you ever envisage that it would still be operating 10 years on? What have you had to do in order to keep the label running for this time?

I’ve been interested in music from my earliest childhood and eventually it became more than just a passion to me. At first, the label was envisaged as a compilation project only, but in 2004 I found a perfect partner – Thomas Ulrich and his mail-order hhv.de. Next, other helping hands like Jinna Morocha from Moscow, Paul Cooper from London, Malte Tarnow or Laurent Fintoni  joined the label. We decided to release first instrumental and vocal solo projects and go more and more into the Future Bass genre since 2009.

I started off as a Hip-Hop DJ in 1992 and then I switched to Electronic around 1998 – 2000 with labels like Beta Bodega or M3rck recordings from Miami, Florida. I learned a lot about label business from La Mano Fria or Gabe Koch and I was a part of the Beta Bodega Coalition until 2005.

Can you expand on your current roster of artists and describe what it is about them and their music that attracted you to sign them – I guess what’s your approach to A&R?

Acts like Robot Koch, fLako, Sweatson Klank, Submerse, Rain Dog, Sekuoia, Pavel Dovgal, Asusu, AnD, Kowton, Tom Dicicco, Krts, Kwala, 1000Names, Sina., or Rumpistol represent our roster perfectly. We’re still in deep arrangements and I think we wanna continue working together, also our love to the organic grooves like Long Arm or 40 Winks. Nowadays nearly all genres are merging into one another and this fits with our music.

In 2009 you founded Project:Squared – what provoked you to open up this imprint as well?

My partner and good old friend Paul Cooper is the founder of our sub-label Project Squared and it’s based in London. PSQ releases dancefloor focused music (most of the time Dub-Techno) on 12” vinyl and download formats.

Despite being based in Berlin, Project Mooncircle provokes an aura of the LA beat scene – What’s your history/relationship with the American music scene and musicians, and why are you based in Berlin?

Seriously, I don’t really have a history with the LA beat scene. Like I said, I’m closer to the Miami or European scene. Acts like Jahbitat, Malcom Kipe (Nautilis), or Epstein did this kind of sound around 2002 and they still catch me more…

Of course, we have LA artists on PMC with they own acoustic like Mike Gao but I don’t wanna have similar tunes of some kind of hype just because it sells well. The LA scene seems to be in their own world sometimes and it’s good because we do our own things in Berlin, London or let’s say Europe in general, too! It’s all different, with other backgrounds and roots.

How did you come to release Sweatson Klank’s ‘Elevate Me’ EP.

I liked his old productions under the name Take. I wasn’t a big fan of his latest releases but I collected all his first records on Buttermilk etc. Since he switched to Sweatson Klank I was totally into his evolution of sound. He’s still a very talented producer and when Laurent Fintoni played me his demo I decided to release his first physical 12” as Sweatson Klank! I’m very proud to have him on board and to work with such pioneer!

For those who don’t appreciate, or fail to understand, why you’re into music – what do you say to them?

That’s my first and never ending love in my life! I worked so hard the last 15 years to be what  I am so it’s already too late to go back on a different way and I don’t want it!

With the rate of music being produced at the moment – What do you hope to achieve with the label in the next five years? Do you envisage a change in your aim and musical direction?

Project: Mooncircle with its various producers & vocalist shall be an interesting experience for anyone looking for the extraordinary.

With firm experience with a mail order service, hhv.de, what are your opinions on the digital marketplace and its overall effect on the music industry?

I’m not sure but I think I will stop Mooncircle if we can’t manufacture any physical release anymore… Good music is good music but a label is more than just a digital platform.

Don’t believe the hype and take your time to search for good music with soul! The industry is huge and we all a part of it but to be more on focus with your own feelings and interest will never disappear!

Photos by The Binh