Following the release of ‘Concealer‘ LP on Planet Mu, Relaxer steps up to deliver the 355th edition of the IA MIX Series, culminating in an hour of rugged and experimental electronics, spanning music from Rrose, Theo Parrish, Ricardo Villalobos, Loraine James, Kali Malone, plus unreleased cuts from Relaxer.

Raised in Washington DC and now based in New York, Relaxer is just one of the many production aliases of Daniel Martin-McCormick, who has released music as Ital through labels including; 100% Silk, Workshop, Planet Mu and his own Lovers Rock imprint. He is also the former co-director of the US-based experimental music festival Sustain-Release.

To commemorate the release of his album, we caught up with Relaxer to find out more about ‘Concealer‘, its artwork and what production methods he employed to create such an intriguing body of electronic music. We also discuss keeping sane and current during the pandemic and Climate Of Fear – the Berlin-based record label and event series he co-runs, which we attended in 2018 at Greenhouse Berlin to witness DJ Sprinkles and PLO Man in the most tropical of DIY raves. 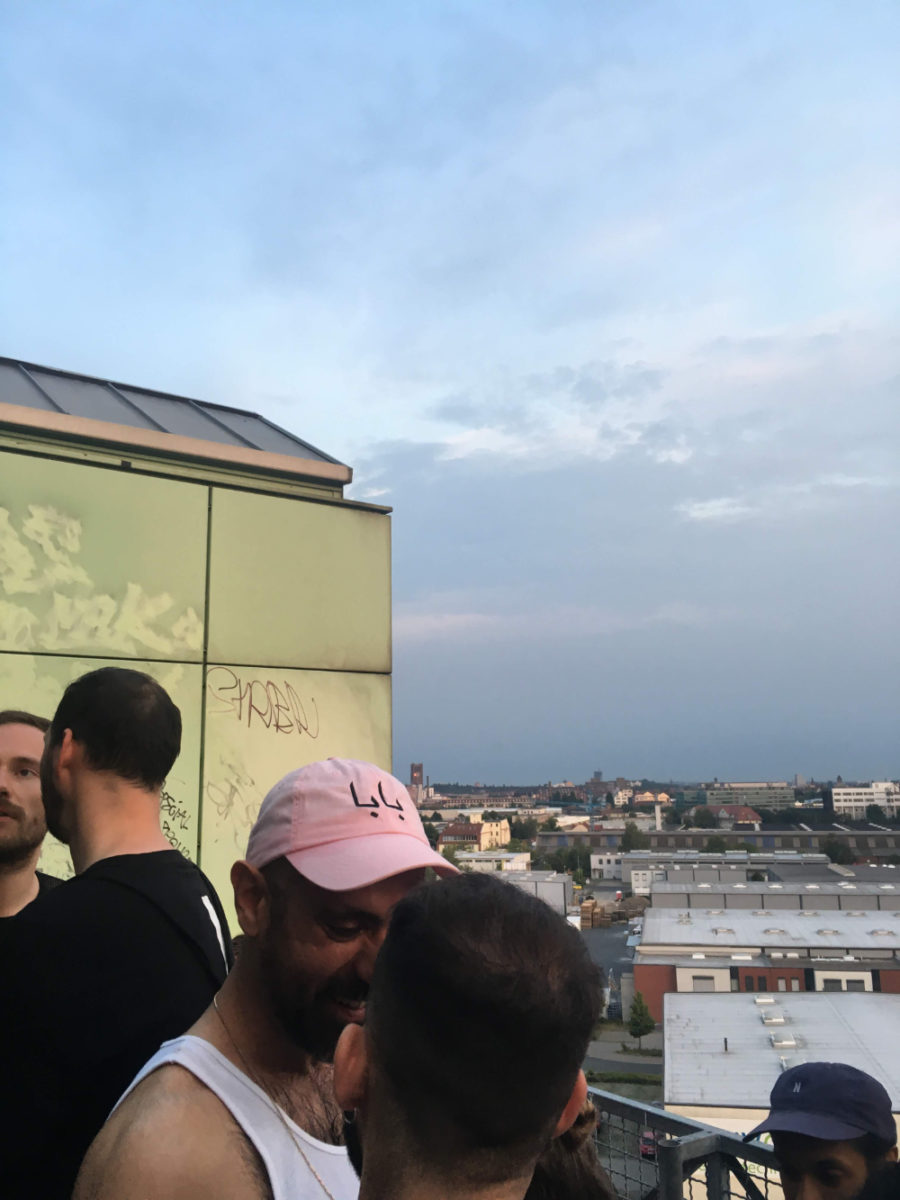 Hi Daniel, firstly congratulations on the release of your new album ‘Concealer’ – how does it feel now that it is out in the world?

Thanks, it feels great.

Where are you currently based and what have you been up to ahead of the release of the album?

I’m based in New York. I’ve been working on a lot of new material in the studio and retooling my live set. “Concealer” had a few new ideas that I’m digging into – particularly the text that Kahee reads in the opening track. I’ve been writing a lot and working that into performance.

We’ve long been admirers of your production output as Ital – so it is a great honour to have you record a podcast for Inverted Audio as Relaxer. Please tell us about how you went about constructing your mix, where you recorded it and how, plus any tracks that you are particularly happy to feature?

Thank you, I appreciate that. This mix was made in Ableton – I’m in between CDJ setups right now. I made it in my studio, mostly live. Right at the top, there’s the Wild Up recording of Julius Eastman’s “Femenine,” which is so breathtaking. I was pretty obsessed last fall with the archival recording of the same piece released on Frozen Reeds as well, but this is just… wow.

I was also reminded recently of “Ima Read” by Zebra Katz, which is such a banger. And the new Laurel Halo remix of ‘Scalping‘ is great. But mostly I’ve just been excited to have fun with DJ’ing the last year or so and to let things unfurl and groove a bit.

Back in 2017 I took a break from DJ’ing and only focused on live sets – I was feeling a bit at war with myself about what direction to take DJ’ing in, especially putting pressure on myself to be, like, hard. Hard can be fun, but honestly I feel like softness is much more radical, for me at least.

Tell us about the concept behind ‘Concealer’?

My entry into this album was really to focus on the materials and the materiality of sound. I was pushing the equipment technically more than I had ever before, and was doing a lot more hybrid computer / hardware. I hadn’t used the computer this much since “Dream On.”

I wanted the morphology of sounds to guide me, and to let these really slick or artificial or processed sounds just radiate and secrete their essence. The concept, such it was, was to hear into the sounds and let them resonate.

Upon first listen of ‘Concealer’ I was most impressed with the second track ‘Mello’ – it’s both euphoric and bombastic – who’s behind the vocals and what do you envisage when listening back to the track?

This one always made me think of a thunderstorm. The vocals are a house A capella I ripped off my phone into an Eventide unit in a basement studio without WiFi. 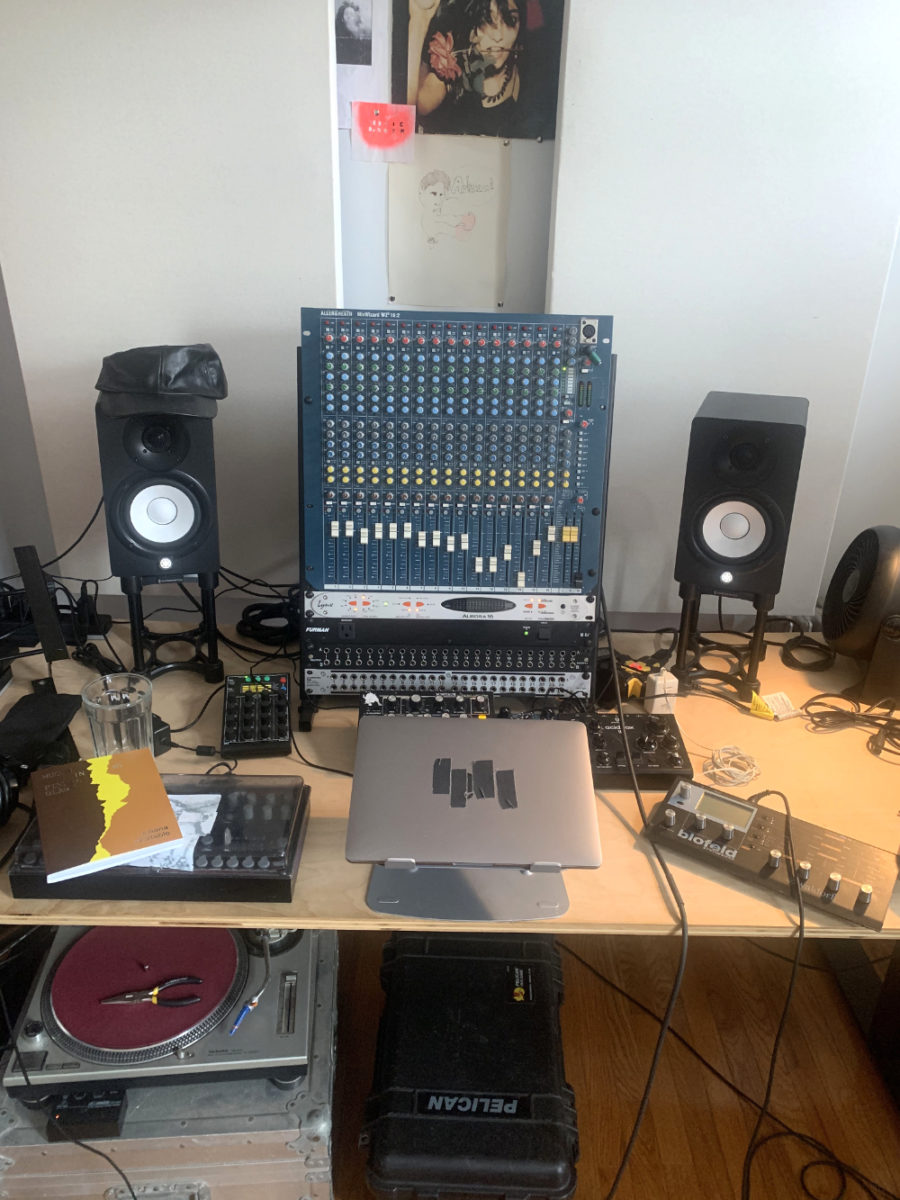 Tell us about your studio setup for ‘Concealer’ – and if you employed any new instruments or production methods for the album?

I fell back in love with destructive editing on this one. That was such a big part of the way I used to make records, when I was working in Audacity. I came back to it right when I started writing this, and took it to a much more intentional level. And that’s the part of what I mean about using the computer – of course every record I’ve made is recorded on a computer, but that process of sculpting synth sounds into these formed audio objects.

I’m also really drawn to the physicality of sounds – I want them to be these textured objects, moving through an audible space and atmosphere. So using a lot of different approaches to spatialisation and moving things around this auditory plane. It hits in a way that’s surprisingly emotive.

In terms of gear – I don’t think I bought any new gear for this? Actually a lot of this was done on a reduced setup while away from home.

How do you think ‘Concealer’ compares to your previous full length ‘Coconut Grove’ released on Avenue 66?

I’m not sure how qualified I am to speak on my own work this way, but “Coconut Grove” was, for me, a return to softness. And it was made in secret, because that felt in some ways quite dangerous to me. I needed the space to be soft without anyone knowing what I was doing, and without submitting to anyone for judgement.

I sent it to Avenue 66 fully formed. I think of it very much as a culmination of the humid, semi-ambient, reflective sound of Lovers Rock Recordings. “Concealer” to my ears has sharper edges. I don’t think of it as hard, but it might be sharp. That’s what always attracted me to punk music as a young person, this sense of slicing desperation. But “Concealer” also feels native to the new softness.

It’s been a decade since you released ‘Hive Mind’ through Planet Mu – tell us about how you’ve kept in touch with Mike Paradinas and the label – and if they have continued to have an influence on shaping your sound and developing you as an artist?

I mean, Mike Paradinas is amazing. His feedback and guidance is very straight up and always on point. I appreciate his vision and insight very much. But he isn’t too hands on with the direction of my work.

As far as keeping in touch, it’s funny – after “Endgame” in 2014, I started thinking about changing aliases and doing a series of anonymous 12-inches as Relaxer. I thought it could be a cool way to test out a more explicitly techno sound. And by the time I was done with that, years had passed.

Honestly, it left me feeling pretty isolated and unfulfilled and kinda defeated, releasing a bunch of records on my own, with no collaborators. And in that state, I just forgot I had a relationship with this amazing label, and I let it languish. Then in the summer of 2020, it just hit me – I should write Mike. It had been five years since we really worked together. So, yea I haven’t been the best at keeping in touch.

The album artwork is by LA-based artist Bjorn Copeland – who uses discarded trash to produce collages, prints, sculptures and drawings that evince the influence of psychedelia and Pop art. Tell us about your working relationship with Bjorn and how you went about selecting this piece – a metal clothes rail with a deflated inflatable boat – as your album art? 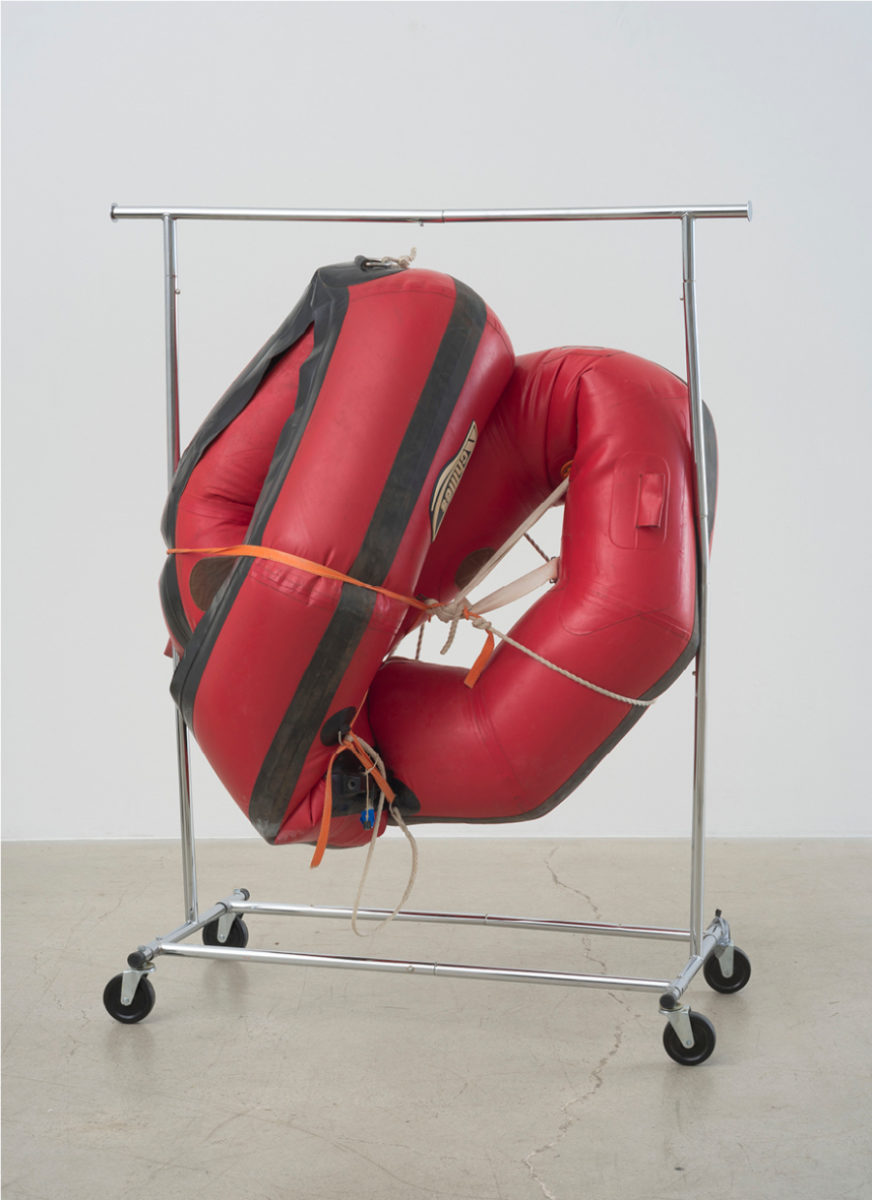 You’re also co-founder of Climate of Fear, a record label and event series in Berlin – it’s an intriguing name, and even more intriguing aesthetic used across poster and cassette designs, please tell us what spurred you to launch Climate Of Fear and what your future endeavours are with the imprint?

I had been getting frustrated with running a label solo, and Mark (who I run it with) suggested we start doing a collaboration that was a label and party series.

I mostly get excited for the aesthetic – for me, half the reason to throw a party is to make the flier. The name and the look speak to something inherently punk in everything I love, even if the music doesn’t have any overt signifiers of that. It’s actually better in some ways if it doesn’t.

I attended the Climate Of Fear event in 2018 at Greenhouse, Berlin with DJ Sprinkles and PLO Man – it was a poignant party and highly memorable due to how hot it got in that building, sweat was literally flowing out of every pore on the dance floor, what do you remember from this event?

That was a very special party for sure. Warehouse & DIY spaces feel extra free… you can’t beat it.

Having predominantly released recordings from artists playing at your events, you have released albums from Soft Boi, Clebs and an EP from тпсб – what’s the A&R process at Climate Of Fear – what are you looking to release?

I personally want every record to be a poem. Something that captures my imagination. I do not want to make products. It’s different every time, but we tend to pitch ideas to artists. That makes it exciting and personal for us.

When people send demos, I try to listen, but I never feel the same way about the music. I also don’t really care about releasing records that are just going to get put out anyways – like if everyone is clamouring for it. I love getting something out that might not have had a chance otherwise, but I know it’s amazing.

What’s been keeping you in check (sane) and current (clued up with music) during pandemic?

My residency at The Lot Radio has kept me current with the music of my peers. Prior to that I only listened to these two Arvo Pärt albums and some renaissance vocal music for over a year. But that kept me sane.

Since we’re approaching the end of 2021, what artists and albums have been on rotation throughout the year?

What’s next for Relaxer?

Usually this question is answered like “stay tuned, big things coming” but actually I have a real response. I’ve been developing a new body of work that’s quite different from anything I’ve done before.

At Sustain-Release this year I performed a 33 min work for piano, organ and voice, and have been working on more stuff that’s focussed on spoken word and sound design, not at all tracky. So I’m bifurcating a bit. I’ve also been collaborating with some friends here in NY, so there’s some material there that needs to find a home soon.

I worked on a film score for Kahee Jeong, which you can’t see online at the moment because it’s showing in a gallery, but I hope we can stream it in the next year at some point. It’s an amazing CGI short. I think I’m also going to start another alias to keep things clear in my mind.

‘Concealer’ LP is out now via Planet Mu. Order a copy from Bandcamp.