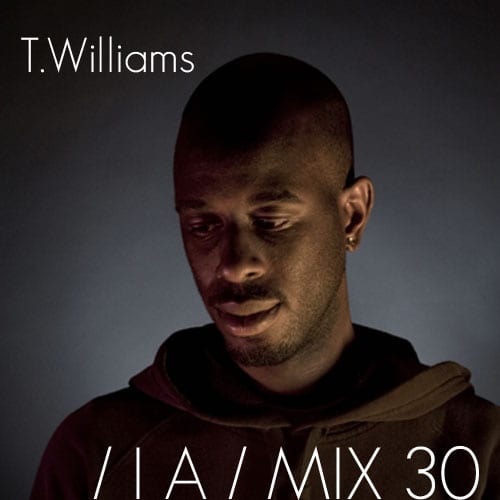 T.Williams is a West London based producer with his root’s buried in Jungle, Drum & Bass and Garage. At the age of 13 he began music production and DJing but it wasn’t until he was 18 that he would have his first release on Jon e Cash’s Black Ops label.

In the summer of 2008 T.Williams and S.E.F founded Deep Teknologi, a record label focused on House, Dubstep and Post Garage Fusion. Deep Teknologi are a collective based in London who specialize in making some of the best house music you’ve ever heard. In 2010 T.Williams also delivered two EPs on the newly formed Local Action imprint based out of Phonica Records.

Thanks to Eastern Electrics and Reprise Agency we caught up with T.Williams at a press day in Kings Cross, North London to find out more about him, his music and what the future holds for both himself and Deep Teknologi. The mix is a fusion of house, garage, grime and dubstep, featuring tracks from Loco Dice, Julio Bashmore, Mosca, Stimming and of course T.Williams.

Please can you introduce yourself to our readers and tell us where you’re from and what you’re currently up to?

My name’s Tesfa Williams, I’m from the outskirts of West London, I’m currently deep in the studio working on original music.

From the ages of ten and fifteen I was listening to jungle and drum n’ bass, people such as Roni Size, Remarc, M-Beat, Shy FX. From the ages of sixteen to twenty I focused on Garage and Grime. From twenty one onwards it was House music in all its different forms and varieties. For me the most defining tunes from each era are:

You produce Grime and Bass music. Garage is clearly a huge influence on your style, what other elements and sounds would you say have been influential in your education of sound?

I grew up listening to roots reggae whilst living at home with my parents. I’d say that this has been a significant part of my education in sound and has very much been a crucial element to my compositions.

You started producing music at the tender age of 13 but didn’t release anything until you were 17. What was it that triggered this desire to experiment with music and how do the instruments and equipment you were using back then relate to your current set up?

My desire for producing music started out at a much younger age, but basically I never had the money to buy the equipment I needed or to rent studio time.

I may have been about 9 or 10 when I was doing this. Tracks such as SL2 – On A Ragga Tip by Slipmatt & Lime would’ve first inspired me to start experimenting by myself. Everything I did back then was about sampling and sound modules not much has changed, just the fact it is all in the box now, same principles though.

What is your opinion on the genre of dubstep? Do you think it’s still what it used to be, or has it evolved into something new?

The genre dubstep has definitely evolved loads. I find it much more interesting nowadays if I’m honest. The earlier stuff always left me feeling a bit unsatisfied. I think it’s a cool genre overall, and the people involved are definitely pushing the boundaries of dance music in general.

You founded and run the record label Deep Teknologi. How did this come to fruition and what were the determining factors that provoked you to explore this new venture?

The label came into fruition mainly because my partner and long time friend S.E.F decided it would be a cool thing to do being that we had both started up labels in the past. It was always about putting out good dance music. Stuff that represents the music we’re feeling.

For me, record labels are a closely knitted network of friends coming together to record and release the music they love. How does this translate into the Deep Teknologi genetic make up?

This totally translates to Deep Teknologi as all the artist I have A&R’d are friends that I have known for years and people I would easily go for a beer down the pub with.

Who else is behind the label and what are there responsibilities?

S.E.F and I share the duties between ourselves. At times J.Bevin helps out with things if it’s necessary. But most of the time S.E.F and I manage the label.

What are you’re A&R policies, what elements are you looking out for when people submit music to you?

When listening to demo’s we are mostly looking out for music that will work well with the UK crowd. People who have put elements of our dance music time lines into there productions. So if you make music between 125bpm and 135 bpm and it has elements of grime, garage, house & D&B then you should be a winner. But I guess we’re just looking for good dance music.

Who is responsible for the mastering and production of the imprints releases? Do you dictate a specific sound aesthetic that every release must adhere to or do you leave it to the hands of the engineer to decide?

A guy called Beau Thomas at Masterpiece Media in Hammersmith, London, does the mastering and engineering. He totally understands the sound we are going for and how it translates to the dance-floor. He always give’s us just the right amount of everything.

I’m the one who deals with this process as S.E.F is less experienced in this field. We leave it the hands of Beau to do his thing and then listen back when he’s done. In my time commissioning him, which is over a year now, we’ve never had any disagreements in sound aesthetics and I don’t see it ever happening he’s that good.

You recently performed at Glade festival in Norfolk. Being a predominantly psy-trance, techno and house festival how did bass music go down with the crowd?

I always mix it up so I am never out of place at a party where they play house music. My set went down a treat; the guy’s from Hypercolour Records said I had the best set of the day, so I guess I mixed the bass with the house in just the right amount.

You’re currently touring Europe, what locations have resulted in the best and worst places to perform?

I haven’t had a bad experience yet. Everywhere I’ve played on mainland Europe has been wicked. Germany, Holland, France, Portugal, Switzerland even Scotland was having it.

What environments do you prefer to create and experiment with music in?

I prefer to go to a dedicated studio unit and lock myself away for hours. It seems to bring the best results although the bedroom isn’t a bad place to start an idea either.

You’re performing at the Eastern Electrics August bank holiday party. What can we expect from your performance?

You can expect some really fresh productions from myself and some old classics thrown in there for good measure.