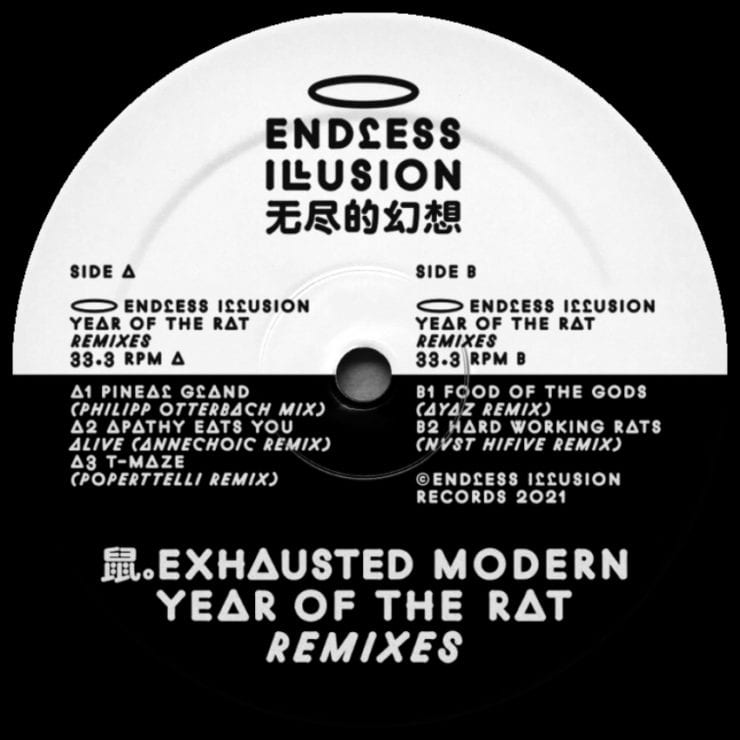 Prague-based musician Exhausted Modern and his Endless Illusion label, have manned the frontline for dark and erudite music in the Czech Republic since 2011, celebrating local talent with an appreciation for bleak electronics with more than just a touch of something extra.

Now, almost 10 years since the label’s inception, Endless Illusion line up a remix EP consisting of tracks taken from last year’s ‘Year Of The Rat‘ album, calling on close friends including Philipp Otterbach, Annechoic, and Ayaz to twist his original material into new depths.

It’s telling that the remixing artists are close to the label, with each of them producing a cut that shares the exact sensibilities of the label: dark and dystopic, but with a faint glimmer of a silver lining that holds a promise of hope, a grim determination to make things brighter.

Ayaz’ remix of ‘Food Of The Gods‘, perhaps the quintessential remix from the EP, is a cinematic film noir reconditioning of Exhausted Modern’s original material, diving wholly into that ocean of dark water which composes the original.

There’s an unavoidable narrative in the track’s composition, a storytelling that goes beyond the elusive meaning contained within the extensive vocal sample, carried by the sewer-scuttling aesthetic of the music. Refined and classy dystopia with charisma, a far throw from simply shouldering gloomy electronica for dramatic effect.

‘Year Of The Rat Remixes’ is scheduled for release 25 February via Endless Illusion. Order a copy from Bandcamp.