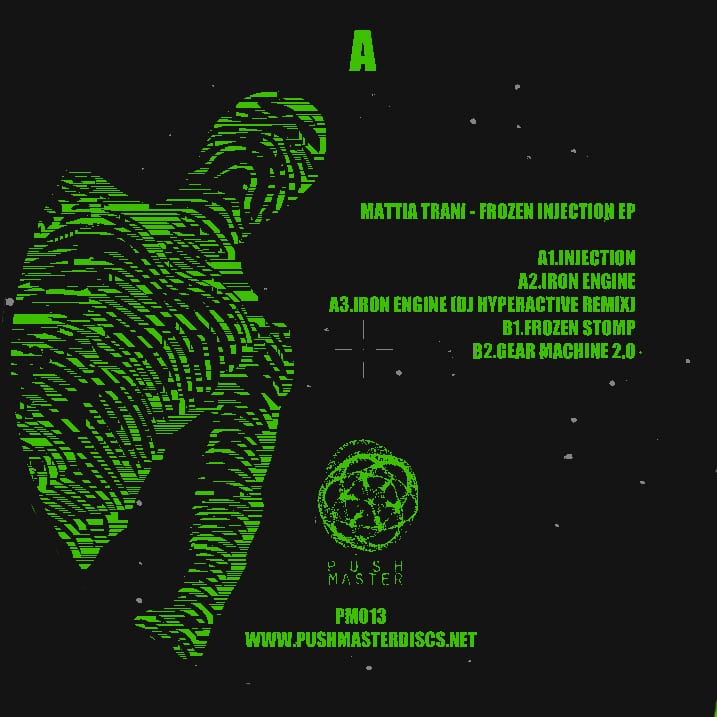 Fresh off his recent releases for MinimalSoul and Wet Cellar, Pushmaster Discs head honcho Mattia Trani breaks the new year in with ‘Frozen Injection‘, a proper 5-track techno heater that’s coming out today via his own imprint.

Unrolling a blazing 4/4, warehouse-dedicated weaponry that balances just as efficiently his regular Detroit-influenced touch, all original mixes of Trani’s new instalment have the particular feature of having been recorded live on analog drum machines and synths.

As a first glimpse of the tempest that’s about to drop on your turntables, we’re no short of proud to present you the equally mind-bending original version and Chicago figure DJ Hyperactive’s rework of ‘Iron Engine‘, two of our most favourite cuts off this steaming platter.

Doped on Millsian droney loops and a rabid herd of percussions, Trani’s matrix piece unleashes a hissy, pulsating machinery all set for heavy floor-melting action. On the other hand, DJ Hyperactive’s rendition opts for a more insidious treatment, making the most of spaced-out bleeps and bloops whilst offering a lazed-out interlude to Trani’s high level of physical demand.