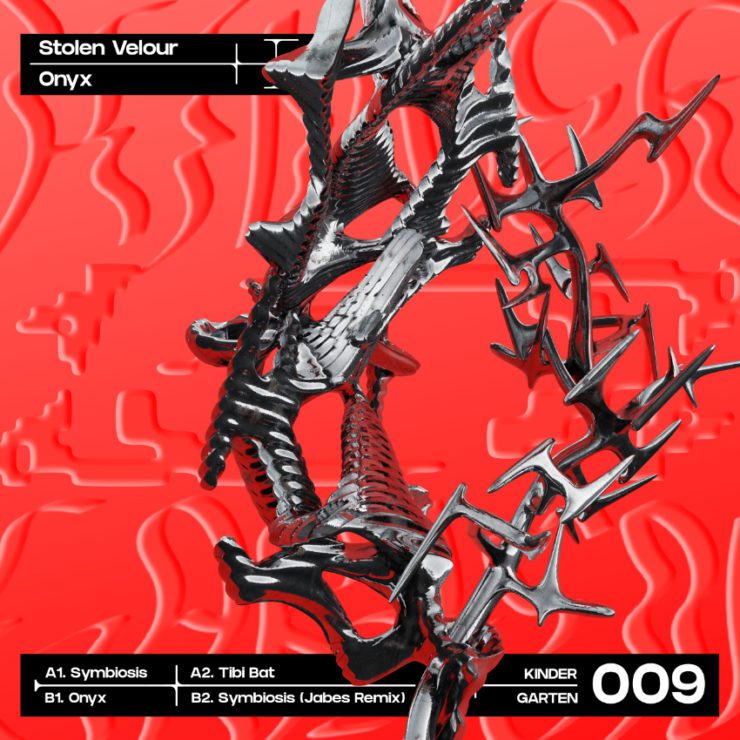 As the world opens up once again to us club-seeking lot, we start to realise that the borders between countries, cities, scenes and genres are blurring entirely. During a time where we spent most of our days and nights at home in front of a screen of some sort, we found time to let every klaxon hit us all at once without taking notice of what was changing. Meanwhile, you had London-based artist Stolen Velour honing their craft and putting together maddening, genre-fluid cuts for NY-based label Kindergarten Records.

After his initial appearance on the label with a contribution to the mini-compilation ‘Fluo II’ released in April, the Londoner returns with their first EP on the imprint, entitled ‘Onyx’. Exploring the intersectionality between the genres of hyperpop, neurofunk, trance and UK funky, Stolen Velour connects the pathways between these distinct worlds into a rich four-tracker that widens the sonic scope he occupies in and out of the club space.

Closing out the EP is today’s premiere – a remix that strips back and shifts the tenacity of its initial expedition. Inverted Audio favourite (and Newtype Rhythms alumni) Jabes find a way to accentuate the yearning for resounding resolution in the already massive ‘Symbiosis’ – as he picks up the tempo and ratchets up the tension by parsing out the melodics and shifting the percussive excitement to places off-world and into the stratosphere. Hear the high-pressure heater for yourself after the jump.

‘Onyx’ is scheduled for release 19 November via Kindergarten Records. Order a copy from Bandcamp.