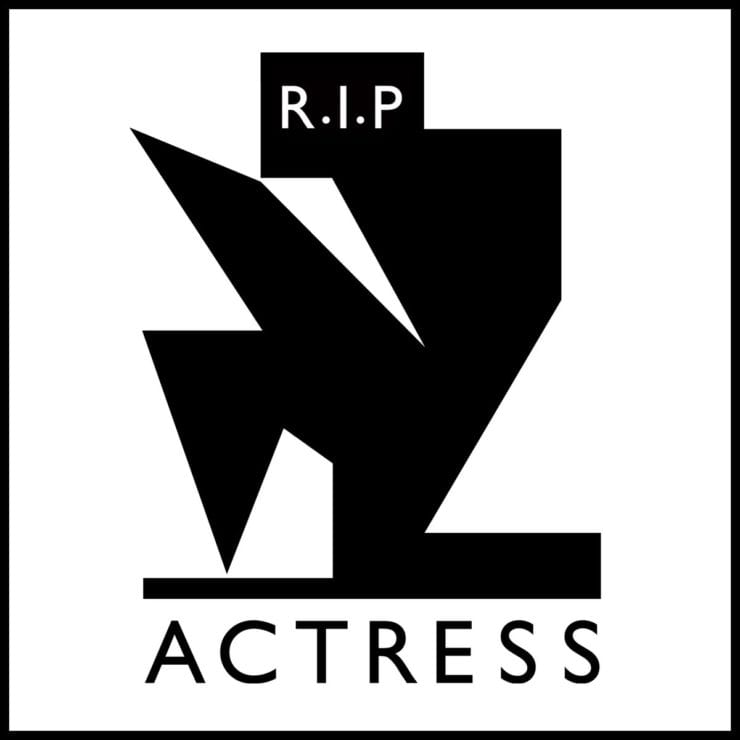 Actress (aka Darren J Cunningham) has always been a purveyor of that rarest of things – a sound which is somewhat difficult to pin down. There’s a quintessential something that marks him out as unique, but trying to describe it exactly is akin to explaining an abstract painting to a blind person. I suspect this is due, at least in part, to the inherent contradictions he presents.

Whilst overwhelmingly a digital sound, it’s dirty and loose, stripped almost entirely of the clinical precision you’d expect from say, Raster Noton. There’s a laziness which, perversely, it must take a certain amount of effort to manufacture. And whilst “R.I.P.” sticks pretty closely to the signature sound forged on his excellent first two albums “Hazyville” and “Splazsh“, it’s a record which shows that even after the critical acclaim afforded to his previous album.

Honest Jon’s have given him free reign to be as experimental as he likes – there’s little regard for the standard form and function of dance music here. If anything, it’s the furthest out he’s got so far. “R.I.P.” takes it’s time to get to where it’s going. The music box ambience of “Uriel’s Black Harp” and “Jardin” are among the subtlest of electronica ditties, both washed liberally in the soft digital distortion which is a cornerstone of the Actress sound. They make the perfect foil for the unexpectedly – dare I say it – prog elements of “Serpent“, with its uneasy plucked strings.

Is it a concept album? This interview suggests that it might be – one concerned primarily with ‘death… the devil… and the loss of paradise’. And there’s certainly a narrative element to the seven tracks that lead to the album’s ‘big bang’ moment – “Shadow From Tartarus” is an absolute beast of a thing, emitting terror-inducing bass frequencies – a many-headed Cerberus blocking any route back from the underworld. Yet somehow Cunningham keeps a firm leash on this demon, magically entrapping it with melodically chiming bells – another example of his talent for crashing unlikely musical particles together at high energies to produce fascinating new audio physics.

“Tree Of Knowledge” is sparse, a detuned synth looping over a single drum that deigns to appear only once every bar. “Raven” is somewhat friendlier, offering some hope of redemption by virtue of a fleetingly cheeky melody as a counterpoint to the glitchy white noise and subtly compressed kick that keep it in motion. “Caves Of Paradise” calls to mind a late 80’s house track that, whilst being mutilated in an echo chamber, is also simultaneously attacked by mechanical harpies, all at the behest of Cunningham from his console.

“The Lords Graffiti” returns us to more familiar surroundings and is the closest the album gets to rulebook techno – it’s refreshing by this stage of the album and sets the stage nicely for the outro of “N E W” – a wistful synth theme – and “IWAAD“, which turns the shuffle right up for a parting groove formed of a deconstructed diva and sub-aquatic synth bubbles before disappearing in a cloud of reverberation.

“R.I.P.” is one of the most feverishly anticipated albums of the year. Certainly no courter of media hype, the speculation about where Actress would go next is borne solely out of the strength of his earlier releases and the uniqueness of his approach. So what does this album tell us about him? It’s difficult to say.

As always, it’s the audio equivalent of trying to peer through a steamed-up windscreen as you approach a complicated junction – there are shapes and constant movement, but the world is monochrome and indistinct. And whilst they may appear filtered and blurred, you can be certain that there are razor sharp edges ready to catch you out somewhere. On “R.I.P.” Actress has pushed his boundaries a little further than they’ve been previously, but the result is that once again we must ask the question – how much further is he going to go?