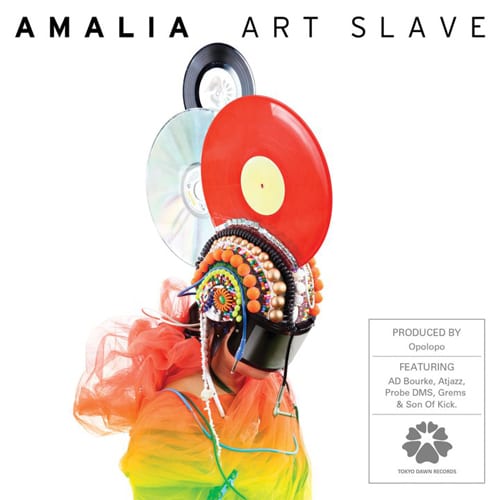 Over the last 6 months I have strayed ever further from the beaten track in search of music that motivates and inspires me to live, write and work in a world that continues to spiral into varying forms of chaos and confusion. We are all quintessentially ‘lost in music’, and right now the sounds I am choosing to wipe away the transgressions of the day, are those of ‘future funk’ and ‘soul’ productions from a handful of labels and producers. These little celebrated, highly articulated group of musicians are offering something wholly refreshing, whilst still drenched in the roots of a time long forgotten.

Championing these sounds are people like ‘Dam Funk’, ‘Ad Bourke’ and ‘Opolopo’, the latter of which produced this album for Amalia, shortly after releasing his very own heavily galvanised concept album ‘Voltage Controlled Feelings’. Residing in Sweden, Opolopo stands to be the most intuitive of all, with a lifetime’s experience studying the syncopated rhythms of funk. ‘Art Slave’ is sonically and musically influenced by late 80’s / early 90’s New Jack Swing and Boogie.

Tokyo Dawn Records describe themselves as ‘a tough little music unit based in Munich’. Although they have been around as a collective of artists since 1997, the labels relaunch in 2009 is where we begin to see true focus and direction towards putting out high quality ‘soul futurism’ in all its forms. Amalia herself is considered Tokyo Dawns ‘first lady of funk’, collaborating with a handful of the labels artists, in-conjunction with an illustrious career of her own. Amalia has shared the stage with the likes of Jazznova, Saul Williamsand the Cinematic Orchestra to name but a few, this is her first full length solo LP. ‘Art Slave’ gives a nod to the women that catalyzed her career, the likes of Chaka Khan, Sheila E, Eartha Kitt and Betty Davis.

The album encapsulates a silky smooth formula, while Amalia’s voice glides effortlessly through the tracks like a viscous glue holding the music together. This is unashamedly sexual, but rather than feeling like a cheap part of the redlight district where no one gets out with there self respect in tact, this feels dignified and salacious. Mellifluous and funky ‘Welcome To Me’ and ‘I’m The Woman’ demonstrate the control and depth of Amalia’s vocal talent. Simultaneously, Opolopo’s beats are hard edged and attention grabbing, there’s no time to drift off topic.

Moving through the album, parts take more playful forms. ‘Luxurious’ and ‘Bonafide’ for example combine hard kicks, snares and glitched out funk lines with rhythmic vocalism. To counter these joyous moments are the down-tempo, soulful slow jam’s you would expect from an early Barry White album. ‘All The Funk That I Need’ and ‘Stop Please’ are inspired freestyles floating round a central theme/chorus that really exemplify the quality of our ‘First Ladys’ Boogie. I wouldn’t call this album easy listening, but it is certainly east to engage and enjoy on your own terms. Whether you are a die hard Funk and Boogie fan, or simply curious to hear more, I would highly recommend this release as music to keep you smiling and reflective.