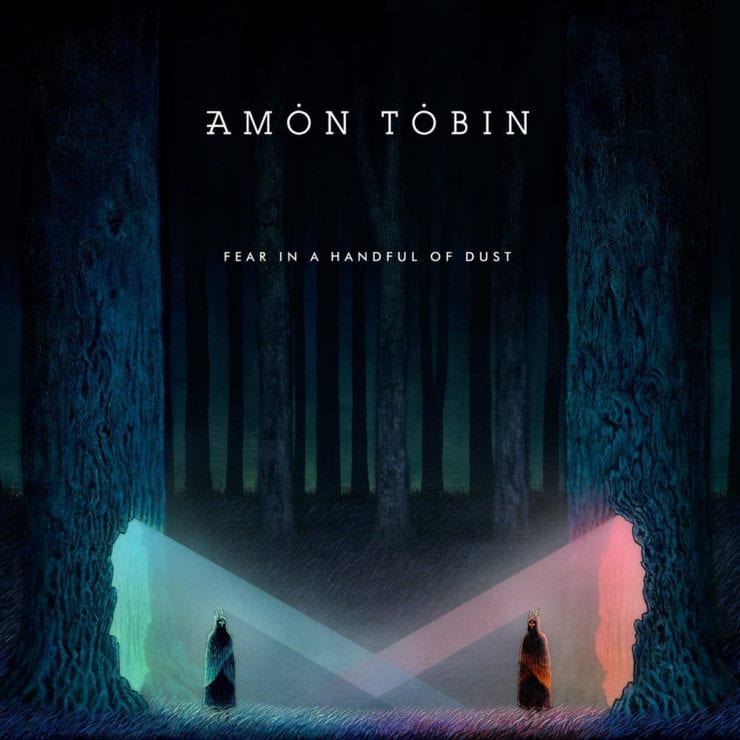 Eight years ago, Amon Tobin stood smugly nestled in a glass cube surrounded by amorphous abstract visuals that spasmed and convulsed in sync with the machinations of his ‘ISAM‘ LP. People stood in awe around the technological marvel like disciples worshipping at a herald’s feet as he ushered in a new age of possibilities. He was like a visionary showing people brief glimpses of the future, then disappearing as quickly as he arrived. Leaving only a burnt-out impression of light and sound lingering in their minds eye.

Electronic music has a notoriously long honour roll of luminaries who have helped shaped the culture and after that project it’s fair to say Amon Tobin secured his role on that list. After an extended break he has returned on his newly created imprint Nomark with the less ambitious, but nonetheless compelling, ‘Fear In A Handful Of Dust’.

You can almost hear the breath of trees and feel the texture of free-flowing water flow in the mystical and mysterious soundscape of opener “On a Hilltop Sat the Moon”. The next track “Vipers Follow You” builds a movie scene-like sense of trepidation, like you are being tailed by malevolent shadows in a foreign art-film. While its eastern-sounding plucky guitars and deep chants invoke thoughts of shamans and the sacred.

The violent digital raindrops that pelt “Freeformed” hint at deep cracks running through the flawless sound sculpture. In a sudden twist from the placid atmosphere and self-centeredness of the first tracks, it now sounds like an A.I system has contracted a meme-virus and is now processing data at an increased and eccentric rate.

“Pale Forms Run By” is a brief return to ambience before it is shattered by the dissonance of “Heart of The Sun”. The bouncy loops and distorted female-synthesised vocals of Tobin on “Fooling Alright” exist in its own environment. Like several tracks, it is uninterested in the coherency of the LP as a whole. The album makes abrupt jumps from organic lush rhythms, to more haphazard and sporadic noise. From spirit guides navigating through the psychic winds of the ether, to fractured cybernetic psyches writhing in existential static. The friction of the records two faces, (one enlightened and the other anarchic), creates a tense and almost schizophrenic contrast between postmodern antagonism and more traditional muses and artistic processes.

It’s as if Amon Tobin has had a period of introspection since the digital alchemy of ISAM and has fallen deeper in love with natures beauty. The record sleeve highlighting his appreciation for the natural and the esoteric. The splattering bleeps of “Milk Millionaire” and “Three Different Hat Sizes”, sound like they were meant to unnerve to the point where you seek the tranquillity of the more ordered nature-inspired songs for sanctuary. Like being crushed in the rush hour on the subway in order to appreciate the peace and space of the countryside.

Amon Tobin was in the process of creating an ambient masterpiece but could not help messing with the mind of the audience, relishing in its imperfection and brutal disparity. It’s like he saw bulbous, mutated growths form on a flawless sculpture and out of a sense of eccentric artistic merit left them instead of removing them completely. ISAM was designed to be performed as a visual spectacle, but in Fear In A Handful Of Dust, Tobin builds that visual spectacle in your mind and takes equal pleasure in tearing it down.

‘Fear In A Handful Of Dust’ is scheduled for release 26 April 2019 via Nomark. Order a copy from Bandcamp.

Discover more about Amon Tobin and Nomark on Inverted Audio.