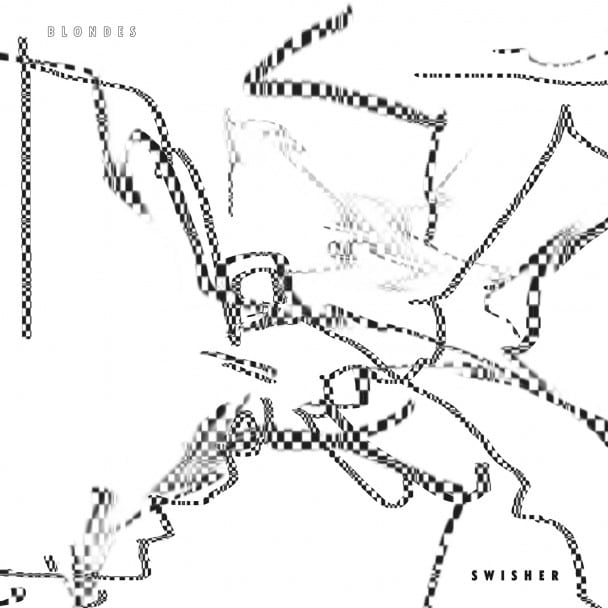 It seems to happen every year. The full force of summer (finally) arrives, and like magic you find yourself listening to an album that you know is going to be associated in your mind with the arrival of the sun for foreseeable future. The minimalist electronics of Blondes might not seem the obvious place to find a ‘summer’ album, but with ‘Swisher’ they’ve created something that glows with a serene euphoria, sitting somewhere between an Ibiza anthem and a Fela Kuti cosmic jam.

The duo of Sam Haar and Zach Steinman manage to seamlessly fuse analogue with digital, live instrumentation with sampled to create a rich version of house music. ‘Andrew’ starts with squelchy synths before a live sounding bass groove takes over. A simple melody takes over the track which manages to capture that same naïve teen holiday feeling tapped into on Don Henleys ‘Boys of Summer’. Towards the end of the track, tribal polyrhythms join in that sound as though a hippy drum circle has been caught up in Blondes relentless momentum.

Despite this constant movement, the tracks on Swisher never feel like they’re rushing. They mostly clock in around the 7 or 8 minute mark, but forgo abrupt crescendos and drops for waves of slowly changing textures and subtle rhythmic shifts. The title track sticks to a four to the floor kick, with a mixture of live percussion, drum machines and synthy arpeggios floating over the top, slowly giving shape to the piece. ‘Wire’ follows a similar progression. Warm organ drones hovering over a bed of percussion that increases in complexity without loosing its trancey groove. The effect is similar to the minimalist psychedelia fostered by the Kompakt label for so long, in particular that practiced by The Field. However the constant feeling of human input in the execution, and an ability to add and subtract ideas to a piece in a way reminiscent of a Terry Riley composition, help forge Blondes a unique identity.

One of the key features of this album is that despite the subtle intricacies, it is always light hearted and engaging. At various points throughout it sounds like the soundtrack to some lost seventies LA Cop show. Bouncy synth bass, and cheeky flourishes of organs and percussion give Blondes a depth beyond the cool efficiency of a lot of their contemporaries. These sounds are incorporated smoothly into the summery feeling of the album, like on opening track ‘Aeon’, and are never allowed to become intrusive or cheesey. The heart of the album is built on sequencing and sampling, but it stretches out to include so much more.

As with last years self titled debut, Swisher shows Blondes skill at making a euphoric yet subtle form of electronic music. Here they’ve taken in an even broader range of ideas, without falling into the trap of sounding cluttered or contrived. As I’ve spent a beautiful sunny day trapped in sweltering London, they’ve made abandoning the tube and walking home through the city with my headphones on seem even more appealing.