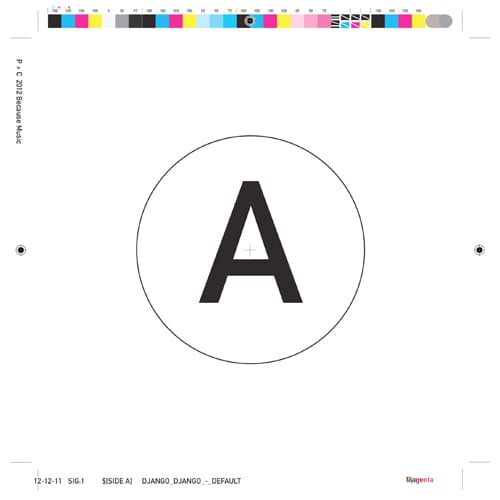 Three years have elapsed since Django Django dropped their debut single ‘Storm / Love’s Dart‘ on Shabazz. Whilst it doesn’t look initially like they’ve done much, the reality is very different. Because Music, the French independent powerhouse behind Ed Banger (Justice, SebastiAn, Oizo, Breakbot), Metronomy and Connan Mockasin, signed them up. Leftfield pop success is truly theirs if they so desire, whilst the potential for off-piste electronic pervasions isn’t diluted at all.

Colour, shade and harmony seep out of every vocal line, whilst producer / drummer Dave Maclean orchestrates proceedings and furnishes the ensemble with skittering, languid percussion. Bolstered by all manner of rattling guitars and warm synthesized eccentricities, the resulting concoction breathes a throbbing pop vibrancy.

‘Default’ is their go-to pop track from their recently released eponymous debut album – catchy as fuck, laden with hidden depths. Your average listener might not hear them. So quite rightly for the single package, a dream team of remixers was enlisted. The way in which they distil, filter and recast the constituent parts is fascinating.

Kompakt duo Walls isolate the guitar strut of the original, commandeering it for their own atmospheric explorations. Like a slow ticker tape facsimile of the original, it compensates for its lack of strutting zing with all round krautlike tension. A nimble forest fire that never catches ablaze, the beauty is in following the glowing embers all the way through ’til sunrise. The seven minutes feels like an extended dream, petering out gloriously into a warm rhythmic outro.

The Dan Carey dub procures some sparse Jaar like tension that stretches out wonderfully. The lingering guitars trade blows with taut bass grooves that sit effortlessly atop a perfectly simple hi-hat led rhythm. The vocals act as intermittent reminders of where you came from, the track builds deliciously into slow drops: the gauzy acid throbs of the original are tugged out and smeared all over, they profit in the room to flutter and slink; amid deftly timed jolts of percussion that fade into mere caresses.

Optimo does exactly what you’d hope for with the track, sprucing the sullen strut of the original into something dark and stormy for the dancefloor. The vocals do little here. I keep waiting for them to evolve from their cutup jigsaw into something more intricate. A constant to cling to in the madness by all means, Twitch takes you by the hand into something approaching controlled delerium. Separated handclaps glide perfectly through these treacle waves.

The final effort comes from Tom Furse, synthesizer in chief for The Horrors. It opens gloriously. His slow pace version adds a distorted elegance to the thudding meanderings of the original. Everything stretches out just that little bit further, squeezing every last drop out of Django Django’s psychedelic crop.