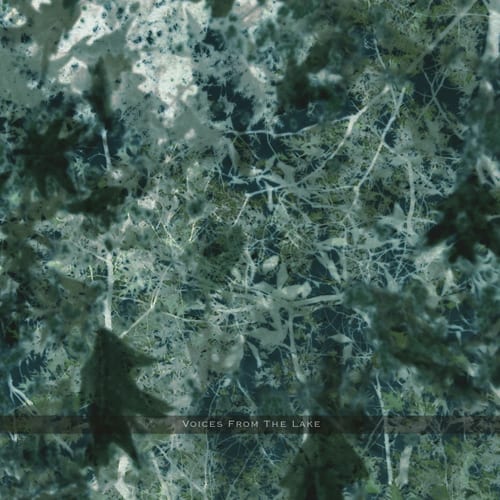 The most arresting techno music always seems to be in some way evocative of the unknown – of mystery and intrigue. That’s not to say any record with a hint of the esoteric about it is an immediate winner, but it is a property shared across the transportive mode of a genre which, let’s not forget, is as much about engaging the mind as it is about compelling the body.

Donato Dozzy and Neel are two producers from Italy – not a country regularly associated with a sound this moody, barring a few notable exceptions (Lory D springs to mind). Whilst Dozzy has been treading the periphery of electronic sound and performing marathon after-hours ambient sets in Berlin for several years (an earlier solo album “K” for Further records attracted some critical acclaim), Neel is a name entirely new to me. Their “Voices From The Lake” project appears to be a fairly new thing, with only one previous outing (the “Silent Drops” EP in 2011 on Prologue to precede this album). Perhaps surprisingly for a young project, they have produced a sound so polished and understated in its depths as to potentially rank among the truly timeless classics of the genre.

It’s a record which positively reeks of voodoo. There is no frame of reference but it is impossible to resist the effect of its shamanic trance. Maintaining a steady tempo slightly slower than most of its peers, it grips you from the outset with “Iyo”, several minutes of foreboding ambience setting the scene before the rather more  mechanistic “Vega” makes a point about where things are headed. Their rework of “S.T.” (originally a Dozzy solo piece, included on the excellent “Composure” Japanese earthquake appeal compilation) is heavenly – part shoegaze ambience, part deep house groove, it doesn’t get much better than this. A curious property of all the tracks here is that whilst they are constantly in motion and subtly progressing (even morphing into one other), there is a pervading feeling of stasis – you are trapped in a swamp, surrounded by shadows or obscure images – but of what? Something too vague to interpet.

“Meikyu” typifies the sound – rhythmically it is a percussive midnight incantation from a witch doctor, underpinned by the wailings of the spirit world. That may sound terrifying yet it’s a strangely comforting listen. When it morphs into the somewhat  lusher pads of “In Giova” it’s not a relief – more of a vindication – and a logical step towards the double header of “Twins In Virgo” and its reprise, which are as close as the album gets to feeling like it is surfacing. Closing with another ambient gem, “HGS” is one of those tracks you could happily listen to for hours and not tire of.

With all this depth and subtlety, this is a record which only reveals its true genius after a few immersive listens. It’s spooky but not scary and thought-provoking whilst also something of a brain freeze. Perhaps the final contradiction contained in their work here is that, whilst undoubtedly complex, Dozzy and Neel somehow give the impression that it was all so easy for them – it sounds like they could have jammed the whole thing out live in the same length of time it takes to listen back to it. With effortless quality in abundance, it’s fair to say there could be plenty more audio mileage in this pairing.