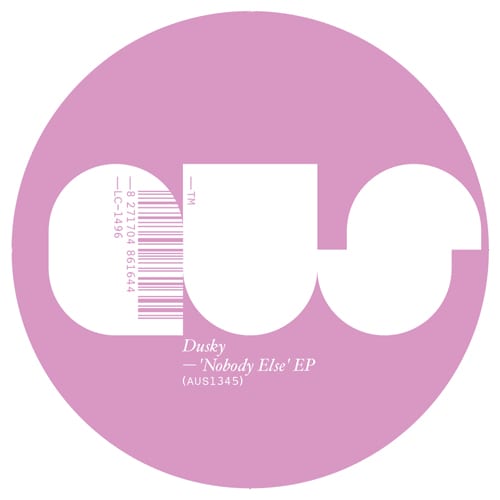 Garage-informed, 90s-facing house production duo Dusky return with a 4-track EP on Will Saul’s AUS Music imprint, their  second with the label, and their first release of the year.

Alfie Granger-Howell and Nick Harriman continue their tradition of deftly cooking garage rhythms with techno and bass elements into deep and dark house productions. It’s a skill that only a few producers execute well, producers that include occasional labelmate George Fitzgerald.

‘Nobody Else’ opens the EP showcasing Dusky’s signature moves – choppy, slightly swung percussion, metallic FM synth sounds, tense jacking house strings, warm pads and moody vocals; anchored together by one of the most endemic basslines of the year so far (albeit slightly similar to the bass pattern in their remix of Justin Martin’s ‘Don’t Go’).  An incessant but well-placed R&B vocal sample imparts that hip 90s vibe that is currently so popular, and is a positive dancefloor stalwart. The aural assault doesn’t let up and the second track ‘What I Never Knew’ begins with a somewhat Balearic sounding drum pattern, breaking into distorted pitched down vocals, reverb-laden pads and another moody bassline.

If ever there was a risk of the EP sounding too homogenous, the third track, ‘Atone’, shifts into slightly less familiar territory, featuring an industrial percussive loop and chopped vocal sample alongside a heavily distorted and brawny bassline, a highlight of the release and setting the mood perfectly for the final track. Rounding off the selection is chunky stomper ‘Dummy’, which for lack of a better comparison sounds like the lovechild of Blawan and Bicep, techno-informed but rooted with a swung 909 beat and another deep, solid bass loop that these two have a serious knack for laying down.

Since the release of ‘Flo Jam’, the pair have seemed to aim to eschew mainstream popularity with a series of deeper, more muscular productions – but the lead track on this EP is positively anthemic, without sacrificing any of their trademark sounds. The infectiousness of ‘Nobody Else’ is a statement that 2013 is another year of unrelenting, genre-bending jams from this talented duo.