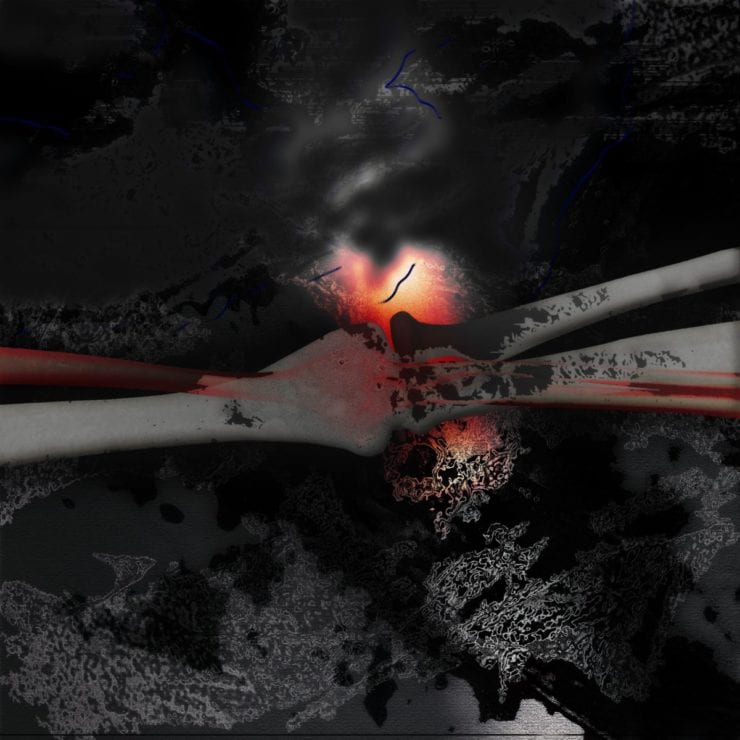 Having spent the last couple years curating some of the capital’s most ambitious and out-there events, experimental collective Edited Arts enter into a new phase with ‘Extended‘, their debut release as a label.

The Edited crew have never really seemed content to nestle themselves down amongst a single genre or artistic medium. Instead their nights typically feature a smorgasbord of art installations, films and live performance, over the years showcasing talents as diverse as Samuel Kerridge, Ash Koosha, Shiva Feshareki, AJA and Ben Vince.

Unsurprisingly, ‘Extended‘ features a similarly kaleidoscopic range of artists, musicians and designers, all of whom were asked to consider “the idea of the extended self.” The result is a sprawling, often unsettling trip through ruptured, freeqed-out electronics, post-everything club sounds and warped, disembodied vocals. The self in question here isn’t just extended, it’s augmented, twisted and savagely digitalised.

This tone is largely established by the drones and sneeringly ironic vocoded samples on Keiken, AGF HYDRA + Suzannah Pettigrew’s three contributions (originally part of a much longer piece but here edited down to an intro, skit and outro by L/ZÉ). Together they help give the album a cohesive narrative, with eerie, off-kilter singing interspersed with distorted and inane conversation snippets discussing wellness regimes and the relative worth of Kim and Kanye’s “Data”, as well as a bleak proclamation that “The earth has a flu from the virus called humans” – Yikes!

Staying true to Edited’s multimedia ethos, each track is accompanied by its own video, one of which you can watch above with our premiere of Loraine James’ lush techno stepper “I Just.” The manipulated, androgynous heads around which all the videos focus point to a kind of surreal, hyper-virtual age in which human and computer are inseparably linked, a feeling mirrored by the mournful cries and pneumatic sub bass of James’ track.

In some ways, this intense focus on technology could be seen as reminiscent of electronic music’s earliest Futurist origins. However on ‘Extended‘ the optimistic fervour for machines and automation espoused by Marinetti & Co. has been replaced by a sardonic, 21st Century snarl, an inescapable cynicism borne out of umpteen tube journeys amidst wan faces staring dead-eyed into their phones.

Further highlights include Mang channeling HDMIRROR with the arpeggiated assault and brutal kicks of “SwarM” and the shimmering 2-step break that rises to the foreground on “Soon Come” by Terribilis. Also worthy of note are the layers of ambient synths, rain-soaked field recordings and garbled foreign chatter on DVKA’s alienated and introspective “Call The Landlord”, a piece that feels conjured from a hazy opium den jam session somewhere deep in Bladerunner’s LA.

‘Extended‘ is an impressive and intriguing release, both in its conceptual scope and the material that results. It offers a thought-provoking view on the absurdity of the coming omni-digital age and what it means – or what it takes – to be human within it. The future may not look massively rosy, but at least it’s got a decent soundtrack.

‘Extended’ is out now via Edited Arts. Order a copy from Bandcamp. Video by Alex Buchan.