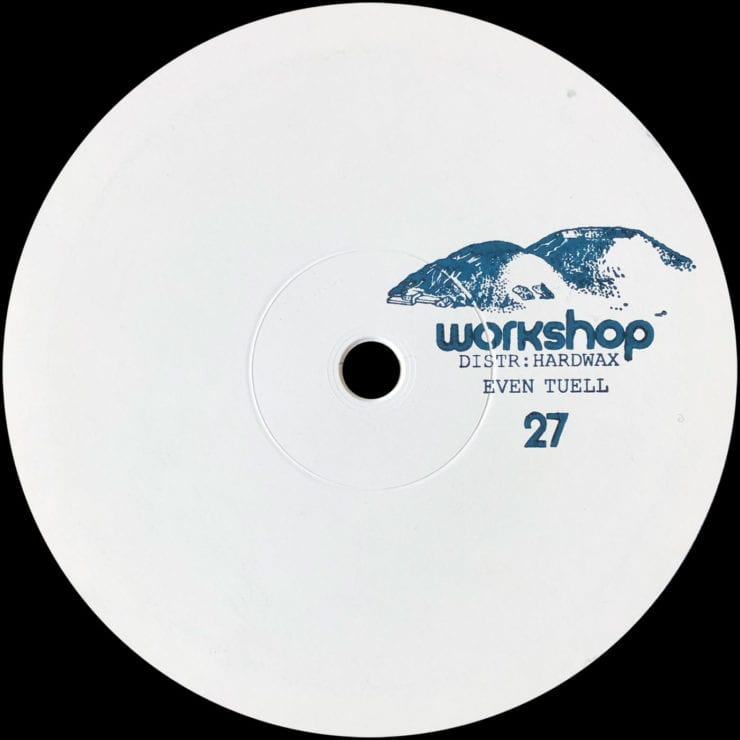 The continuation of an unhurried, sporadic release schedule, unnamed tracks and insistence of including at least one dance floor inclined track per extended player, solidifies the ethos that Workshop has created; house music for those in-between moments. For Even Tuell, aka Paul David Rollmann, Workshop 27 is his first solo outing in 5 years and maintains the enigmatical, emotionally drenched leftism house that has elevated Workshop above much of the mediocrity.

Despite beginning the operation over 10 year ago Jens Kuhn, aka Lowtec, and Rollmann have barely revealed anything about the label, its artist roster or future plans. It continues to forego trends and social promotion, reaffirming a kind of rarefied curiosity and dedication to the roots of oddball house music that has predicated its recent unassuming success. Not entirely shrouded in secrecy but an enviable approach to managing the label and a succession of anti-club classics from The Horn, Willow and Kassem Mosse – to name a few – have encapsulated diggers for a decade.

Although difficult to anticipate a release or even hear a Workshop-related rumour, identifiable themes can be categorised as follows; release two or three new bits every year, withhold a sense of non-conformist identity, never let the label or DJing become the sole focus in life and relish being on the outside of this industry (Kuhn and Rollmann maintain full-time employment as an engineer and designer/owner of Airbag Craftworks respectively).

In similar circumstances to the label’s cult positioning in the industry, Even Tuell has forged a unique style as a producer; his mesmerisingly hypno-house melodies, unorthodox drum patterns and eerie synths are instantly recognisable (check 2014’s exceptional ‘Longing Way‘ EP on Latency for confirmation).

The eclecticism observed during his DJ sets, where he has the right space, sound system and environment to experiment with styles and sonics, transcend his production and amalgamate quite nicely across the whole release. As a selector, he’s not limited to genre or tempo either; flinging dubwise together with funk or electro and even mid-set coming up for air ambient intermissions.

Of the four tracks here, three are thuggishly rugged, still tenderly arranged, but entrenched in more authoritative kick drums than you’d expect from someone accustomed to delicateness and off-centre syncopated instrumentation.

On ‘Rise March Mellow‘ video game keys retain the quirky quality against the backdrop of crunching claps and suffocated seance chants. An unconventional & energetic drum pattern punctuates the entirety, flirting with different textured chords and modulation. The consuming kick drum is teasingly oppressive, but with use of deft breaks and changes in percussion patterns, it never becomes too overbearing.

Listeners could be forgiven for expecting soft to the touch house, but actually, much like when an Englishman mistakenly drinks sparkling water, on the surface, it looks the same but the experience and taste is completely surprising.

Whilst common to hear Workshop music in mixes or in podcasts, it’s rare to find it front-centre of heavy club night. Alternatively, Workshop music has happily found a home in esoteric events and label led line-ups where in-yer-face is not what is expected, and not what Rollmann would normally play.

But the divergence of style on ‘Highway Daydreams‘, a meaner, snarling and screeching techno-ish construction, maybe hints at a segway to more club-focused productions. The subdued filtered kick drum and sub-bass are flavoured with a lachrymose synth that holds true to the Workshop style-electronic music made with feeling and passion.

Pay attention now: you can make energetic club music but still retain a sense of fun and emotion; life doesn’t have to be all 4/4, rehashed Chicago acid and white noise drops.

‘Domingo Nap‘ beatless chiming synthesized interlude gets paired with a wavering static pulse. This is a contemporary ambient track that could easily open or close a set and is blended effortlessly into the original version on ‘Sharp And Shallow‘. Perhaps it’s still a bit too wistful and emotive for 6 am revellers, especially with those featherlike snares and clicks, but the depth and complexity of arrangement offers something fresh whilst centring attention on that powerful voltaic bassline tantalisingly introduced in the dub version.

Despite what little we know or can predict, Rollmann will likely play quite a bit following the release of the new EP and strongly suggest you witness his selector skills first hand if you can, just don’t count on any self-promotion or fuss from him when this release finally arrives at your local record shop.

A1. Rise March Mellow
A2. Highway Daydreams
B1. Domingo Nap
B2. Sharp And Shallow

Discover more about Even Tuell and Workshop on Inverted Audio.