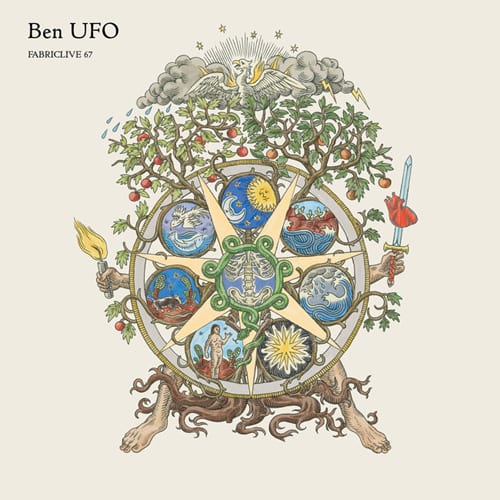 In 2013 trying to pigeonhole electronic music is a Sisyphean task; genres rolling out of your grasp just when you think you’ve worked out exactly what post-dubstep, or outsider house, actually is. It makes for a wonderfully creative, effervescent scene where cross-pollination is the norm; but do spare a thought for fabric’s poor programmers, who have to work out which side of their mix series’ divide all this stuff belongs.

Ben Thomson’s Fabriclive could sit as easily on the Saturday side as it does the Friday, an unrelenting hour and change that, though covering all manner of bases, is built on a spine of true techno. It’s there in Blawan’s ‘And Both His Sons’, a barrage of kicks clattering along like 90s gabba. It’s in the electro wiggle of ‘Take Me Back’, Herbert’s mid-90s house jam that, pitched up by Thomson, takes on a serious Detroit strut. It even bubbles away in Pev and Kowton’s beat-mashing ‘Raw Code’ – forthcoming on Thomson’s own Hessle Audio imprint – albeit as viewed through the prism of dubstep.

The most impressive aspect of Fabriclive 67 is the way Thomson meanders through sounds, across decades, and manages to find the paths that link them. Ostensibly, there’s little common ground between Minimal Man’s 1993 house jam ‘Consexual’ – with its New Jack Swing snare rattle and bumping low-end – and ‘Club Thanz’, last year’s near-beatless synth workout from Jam City. Yet in Thomson’s hands the similarities emerge; a certain shimmer in the pads, the way the bass rolls out of the speakers.

In a mix that defies compartmentalising, the rhythms do begin to crumble as we move into the second half, and the straight-yet-warped house of Gesloten Cirkel and Tim ‘Love’ Lee collapses into the skip and shuffle of Thomson’s post-dubstep contemporaries. A Made Up Sound’s ‘Malfunction (Despair)’ is a particular high-point, an almost incomprehensible shudder of drums collapsing in slow motion; or ‘Studio Power On’ from former Hessle man Joe, where redwood-thick 808s bounce around squeals and shattering glass.

It’s here that Thomson’s mixing feels most comfortable. The entire mix is a swift affair, but the blends feel natural, eschewing the quick-fire cuts of some of his Rinse colleagues. Thomson’s mixing chops are in no doubt, but it’s when he’s working with broken rhythms that things coalesce best; early on there’s moments of clutter, Delroy Edwards’ ‘Feelings’ sitting slightly uncomfortably over ‘Raw Code’, but there’s a seamless beauty in his ability to transition between the freneticism of Mr Fingers and the afro rhythms of Shackleton’s take on Kasai Allstars’ ‘Mukubu Special’ – a deftness that’s perhaps lacking in the mix’s opening salvo.

Fabriclive 67 is a step up from Thomson’s still excellent Rinse effort, showcasing his powers as a selector rather than upfront tastemaker. Perhaps more than anyone else spinning records today, Thomson is able to weave together the disparate strands of a scene in flux; this is a mix that epitomises UK techno in 2013, and should serve as an oft-revisited bookmark in years to come.