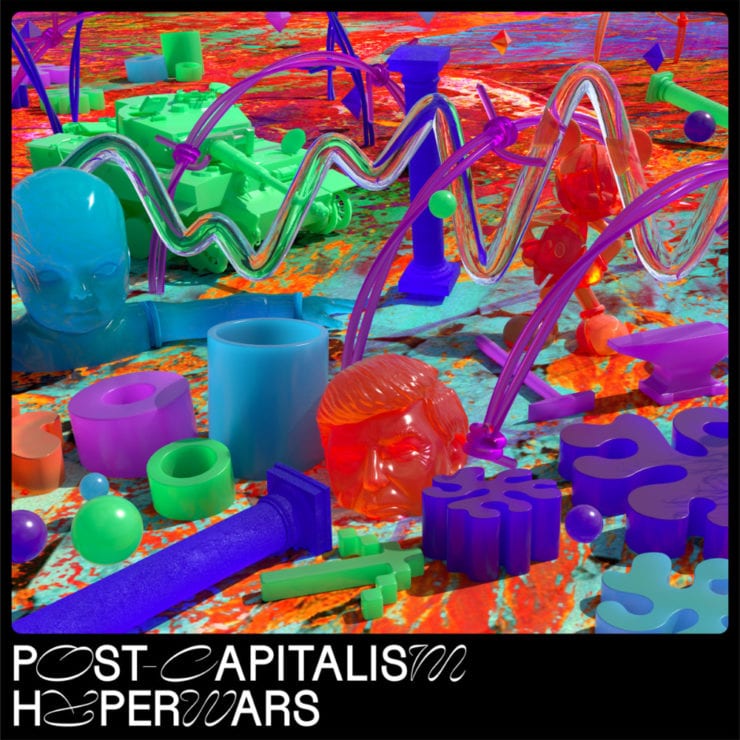 By this point in the year there’s very little left of this world which has not been wracked with convulsions of absurdity; not too long ago the US President suggested injecting disinfectant might help cure the symptoms of Coronavirus. Protests against lockdown (and logic) are taking place up and down the US and UK. Need I elaborate further?

Into this world steps Ikävä Pii with his debut album, ‘Post Capitalism Hyperwars‘. Fear not! The somewhat daunting title belies the tongue-in-cheek frivolity of the contents; rather than an austere and imposing album of faux-intelligentsia social commentary, instead we find an on-the-nose pastiche as chaotic and strange as that of 2020 existence. In fact, the album is so seemingly shaped by it that it’s hard to believe it wasn’t made just yesterday in a fit of frustration.

Ikävä Pii’s music rides on the crest of the swelling fifth world wave. Yet, while many of the blossoming genre’s proponents use sonic darts of biological found sounds to build creative little ecosystems, ‘Post Capitalism Hyperwars‘ embraces the modern without ever becoming entirely synthetic.

Instead of digital renderings of lush tropical forests the image is more familiar, something like rows of neat, green fields printed on plastic and stuck on the milk in supermarkets. Perhaps this image was planted by the title of the single, ‘Tesco Slow Roasted Tomato Soup 700g £0.20’ — only as ludicrous as the savings.

You might begin to have an idea of the kind of “Hyperwars” that are in mind. By ‘LFO Bubble Reinforcement’, any notions that this is contrived conceptual music without quality or substance are dashed. A loose, rolling drumbeat sustains a tension on the cusp of vibrant fun until the myriad elements are fully combined into a kind of calm frenzy, stirred up every so often by flurries of dense, blurry pads.

Throughout, each track veers from conventional structures and patterns. You find yourself seamlessly switching focus to a different instrument, doodle or rhythm floating through the music, some of which independently, seem off-rhythm or -key. Even familiar patterns are markedly different here, with the familiar thrum of a Sleng Teng version so twisted into Pii’s ‘Anti Dancehall Appropriation Flame’ version that it’s barely traceable.

Perhaps this fills you with apprehension: another over-conceptual “edgy” producer thriving off their ability to buck a trend? Despite the unruly nature, there’s a bold, steady control across each track. And, indeed, as with the entire release, it’s not all to be taken at face value. The larger picture and the full statement is found from the label to which Ikävä co-founded, Too Much Information:

“We have decided to not sell our music. It will be free to download and share – and we want you to share it as much as possible. Physical supports will be developed only when the nature of the project so provides: they’ll be entirely crowdfunded to solely cover direct costs and reduce waste to zero, and pressed in a biomass-powered, 100% circular environment.”

So, while Ikävä jests with us, and perhaps more than a little with his own concept, the commitment to a Post-Capitalist ideology is true, and without hypocrisy. This is no vanity project, pressing an album to vinyl merely to satisfy an urge to have a physical milestone for the label. There’s an understanding of the very real environmental consequence to pressing records, and that it shouldn’t be done lightly. In this, Ikävä demonstrates the full maturity of his statement with ‘Post Capitalist Hyperwars’.

‘Post Capitalism Hyperwars’ is out now via Bandcamp. Support the Kickstarter campaign and make the vinyl edition happen!