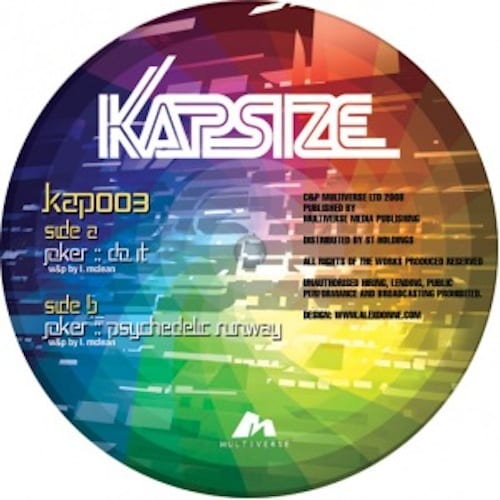 Purple-Wow is back! This one dropped a couple of weeks back now and we’d been waiting for it with baited breath for what seemed like ages. It is the third offering from Joker on his own label, Kapsize, after last year’s two awesome 12’s which saw a collaboration with Rustie on “Play Doe/Tempered” and the anthemic “Holly Brook Park/80’s”. The one thing that completely amazes me about Joker is that his production, in terms of sheer sound, just gets bigger and bigger with every release. The difference between his earlier tunes like ‘Stuck In The System’ and this output is phenomenal and now his production is seriously on a level with Timbaland or the Neptunes.

‘Do It’, which has had massive DJ and radio support, has a catchy as fuck auto-tuned vocal hook and a synth line that’s nothing short of thuggish. Its proper head-nodding business. The flip, ‘Psychedelic Runway’, however, is the one for us. We first mentioned this tune when we wrote about Jamie Vex’d’s ace ‘Sunday Walkman Mix’ for LuckyMe a couple of months back and we still stick by what we said. This tune is massive: the bass pressure is just ridiculous, placed nicely underneath squealing and squashed synths that are coupled with a snare that feels like its going to burst your ear drum. Its a tune that completely personifies what is meant by the Purple-Wow (the crew made up of Gemmy, Guido, Joker and Ginz) sound. This is a devastating 12″ and one that we really recommend you check out if you are yet to hear it. There’s a bit of an argument going on at the moment on dubstepforum as to whether Joker is dubstep or grime and all we can say in response to that is that with music this good, “Who the fuck cares?” ESSENTIAL.

Up next from Joker is an insane collaboration with Ginz coming out on Kapsize in the next few weeks which features the highly anticipated “Purple City” and “RE-UP”. Get excited.