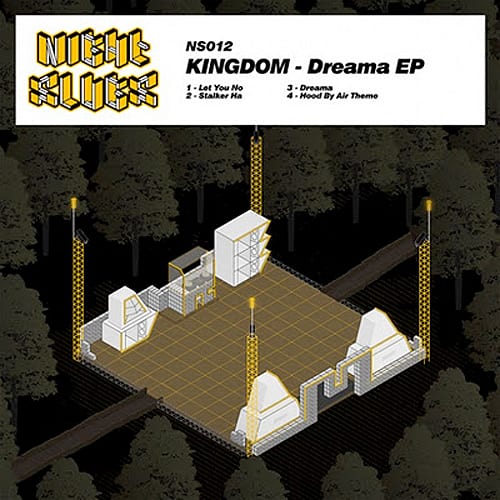 It’s been over a year since Kingdom’s first EP ‘That Mystic‘ was released. His skewered r’n’b stylings have always had a healthy dose of Americanised Nightslug brashness, polishing the neon jaggedness of his label with some refined pop strokes. Since his debut the strutting flavours that became synonymous with his name have gone truly global, with artists from both side of the Atlantic capitalising on the potential the combination has. The barometer for success was always set high however, and few have managed to exhort the winning balance that has always come naturally to the NYC producer. The sophomore ‘Dreama EP’ sees Kingdom incorporating subtle explorations into his core sound, a cacophony of menace, hypnosis and swagger in equal measure.

Opener ‘Let You No’ starts things off in familiar fashion; skittering hi-hats underlay a glistening melody that slips and slides its way around the track. It establishes itself confidently before the pitch-shifted vocal cuts come in, an addition that, crucially, enriches rather than defines. The crawling entrance of Saidi Ama’s sample mirrors the stop-start nature of its accompanying elements; faint snippets morph into fully-fledged lines penetrating through the beat, establishing the inseparable prowess of track and producer.

In spite of the conventional emphasis placed on ‘Let You No’, moments designed for clubs are few and far between. Dreama retains that tense and frenetic atmosphere that Kingdom so aptly conjured in ‘That Mystic’, however, demonstrated nowhere better than in ‘Stalker Ha’. The taut, relentless snares release a foreboding, panic-stricken mood, heightened further by John Carpenter-inspired keys and unpredictable gasps and shrieks. Punctuating through is an inescapable sense of rhythm, manifested primarily through a recurring r’n’b cut that provides a glimpse of humanity through the impending dread.

Despite the up-front nature of ‘Stalker Ha’ the sense that Kingdom is imposing his music rarely arises. The title track demonstrates this notion most effectively – ‘Dreama’ incorporates stargazing, wistful synths that gently nudge the listener into the producer’s groove, inviting rather than bombarding.  A squelching bass line helps to lull, while there remains a definite sense of sordid r’n’b influences amidst the relaxed nature.

The emphasis remains on the mastery of Kingdom’s vocal manipulations, however, the understated audaciousness of the producer coming to a fore in ‘Hood By Air Theme’. The track capitalises on an inescapably morose atmosphere, constantly rising through the correlating percussive and chorus elements. Hammering toms join the fray, climaxing to deft silence before the straight, sudden drop of a vocal sample provides the crescendo moment of the entire EP. It would threaten to ruin proceedings, but the subject matter and the execution encapsulate the ethos of this producer in one fell swoop.