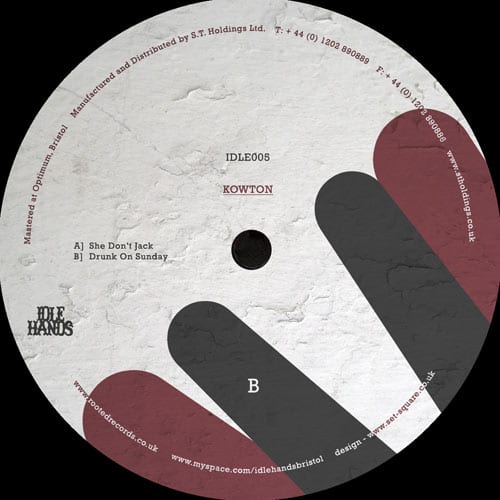 Y’all know about Bristol’s long-term dedication to supplying us with music way ahead of the game – so I’m really not going to bore you with stories of soundsystem culture and Massive Attack. In fact to root this new 12″ from Kowton to anywhere would be slightly undermining, and go against to ‘worldwide’ aspect of house music.

A-Side ‘She Don’t Jack’ captures a production focuses many have latched on to. The combination of deep house with the swing of garage is perhaps not something new, you could in fact say the two are in fact intrinsically linked. Kowton’s fusion however is something wholly different. His earlier 12″ for Keysound still rings true, and you can really see how his style has grown through releases since and his DJ sets along the way.

‘Drunk On Sunday’ on the flip is equally set to tear down sets. A beautifully arranged techno stomper – it’s starkness in terms of parts set off masterfully with eerie Kassem Mosse style pads. This track really brings home why Hardwax have been supporting the release.

What this release signals, though I’m in no way suggesting it’s alone in this, is a genuine influx of UK producers making quality, proper house music. Before you come through with Move D tracks to prove me wrong, I’m not stating this is a totally new concept. Merely that the breadth of producers is increasing, and that there seems to be a few very interesting producers on a similar tip moving on into 2011. Now all we need is a joint in London for good daytime parties on Sundays, and I’ll be a happy man.