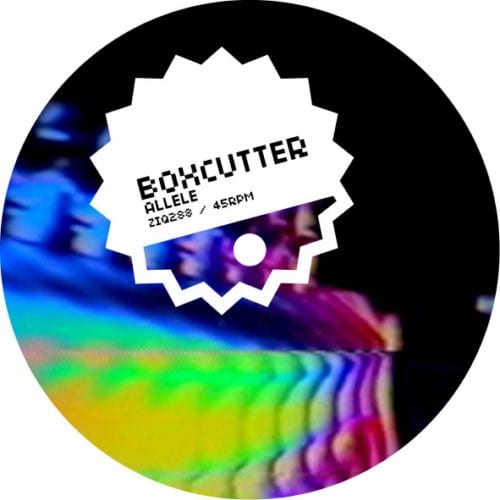 New to the ever evolving sounds of Planet Mu, is a two track single from Barry ‘Boxcutter’ Lynn. Boxcutter has had a steady creative output since 2005, and his music has featured on some of the most forward- thinking labels of the last 5 years, including Hot Flush recordings and Kinnego records.

His sound of late can very much be referred to as post-dubstep, and has been so since way before the word had even been coined. If you don’t believe me, check out his last album ‘Arecibo Message’ released in 2009, produced with skeletons of dubstep drum patterns hidden between tracks,  employing analogue synthesis, soft textures and very funk inspired melodies. This release is a precursor to his forthcoming album, ‘The Dissolve’ dropping in April, and considering the  amount  Boxcutter explores when defining his sound, I’m sure that it won’t disappoint.

The A side ‘Allele’ is a fusion of styles old and new with tight ‘Juke’ drum programming, sweeping atmospherics and a soulful female vocal. Plenty of edits and subtle shift up’s keep the listeners senses stimulated as wavey synths are complimented by jungle drum rolls. The track intentionally seems to lack a lot of low end, but this doesn’t seen necessary with the amount of movement going on.

The B side ‘Other People’ orientates around hazy laid back melodies, intricate synth programming and seemingly 2 – step drums. There seems to be no shortage of idea’s, and clever use of space defines Boxcutter as one of the leading lights of analogue / digital producers. Lets see what the album has in store for us !