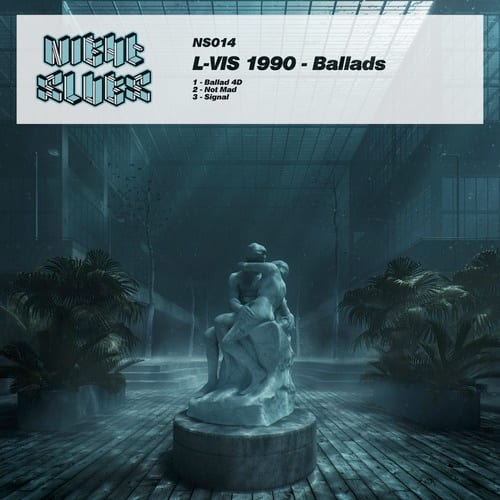 L-Vis 1990 is a slippery one to pin down. Alongside helming Night Slugs, one of the UK’s key tastemaking labels, James Connolly has moved from early grime-inflected excursions to full-blown pop crossover on his divisive 2011 album. More recently Connolly has locked into a raw, analog sound on EPs for Clone and Night Slugs on their Club Constructions series. It’s been an inconsistent ride, but the young producer has shown himself capable of real brilliance, and happily the Ballads EP signals a welcome return to form, mixing guttural sonics and processed sheen to ferocious effect.

We join Connolly on mind-bending opener Ballad 4D, which has been doing the rounds for a while. Ballad hones in on the dark, polished playfulness on which Night Slugs built their name. It’s a stark piece, with subtle percussive twitches setting the scene for a brain-melting bass throb that’s sure to shake up the ‘floor. While the arrangement is undeniably minimal, the attention paid to space and sonic texture makes for a taut, thrilling ride. Second cut Not Mad was last heard on the label’s latest Allstars compilation, and sounds just as good now as it did then. The future-funk ambience offers a nod to label-mate Jam City, as insistent handclaps set a steady pace penetrated by iridescent synths, an intrusive tumbling bassline and a prominent cowbell. It’s an intoxicating combination which shows L-Vis at his best: disorientating, thrilling, and utterly in control.

Connolly goes down a moodier path for closer Signal, where a vast space is created through a whirring scifi wash and the deepest sub-bass resonances. The cavernous space is adorned with an array of clever percussive accents and a funky bass bounce, adding an edge of play to the monochrome construction. Connoly’s unique awareness of space, detail and hints of a keen pop sensibility means that Ballads easily stands among the producer’s best work. As well as pushing sonic boundaries, it all never sounds anything less than quintessential Night Slugs, which I’m sure most will agree is a very good thing indeed.