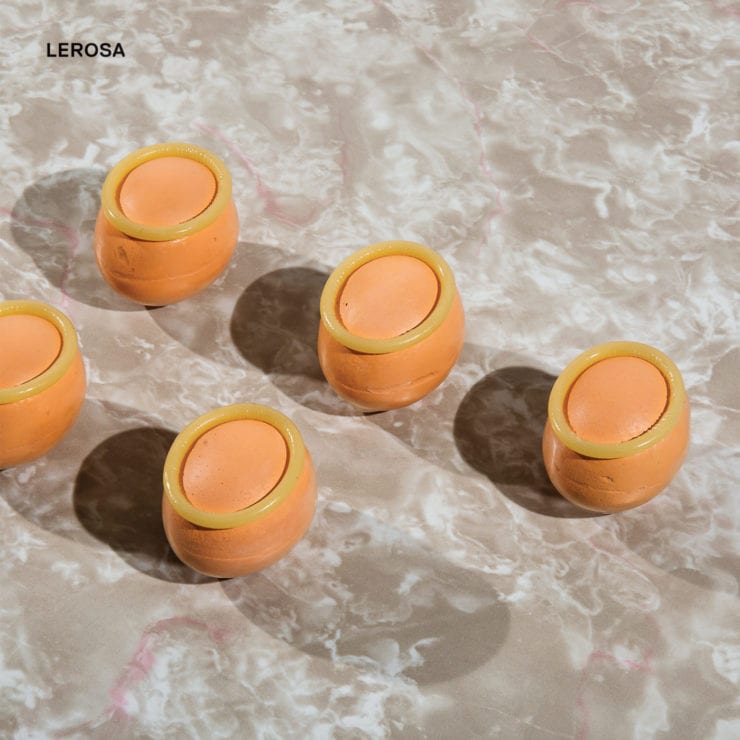 This is acid but not as you know it. For most producers, the temptation to replicate one of the more recognisable sounds in electronic music or even emulate “throwback acid” would be too challenging to avoid. With Bucket of Eggs, Lerosa provides a lesson in craft and workmanship, creating a deep and atmospheric album without the looming omnipresence of a harsh 303 (for evidence read this).

Added to that, ‘Bucket of Eggs‘ is not only one of the best album names, but also – thanks to Sybil Montague – one of the most pleasing cover designs you’ll see this year. The playfulness in words and images as well as a musical hint at Leo Rosa’s own idiosyncratic personality and character.

The Dublin-based Italian produces a strain of house music that sits comfortably between opening sets for dancefloors and apartment sound systems and has been refining that particular idiosyncrasy since breaking-out in the early 2000s on Uzuri, Millions of Moments and D1 Recordings.

Although never quite shifting from that quirky understated sound into grander more commercially successful styles, it’s reassuring to see that the quality of music has not been at fault for the lack of overt self-promotion. It’s also refreshing to see that the Instagram-heavy, document-my-every-move type of trajectory, is not something Leo has signed up to (unless you assume pictures of his cat his helping his career in that regard).

Those expecting to find a collection of intense workouts would be, like most, very surprised at how delicate and sensual this is in contrast to the orthodox releases on Acid Test, the Acid House focussed sub-label of LA’s Absurd Recordings. The title track begins with tense pads, galactic off-kilter chords & a murmuring underwater bassline, teasingly peaking like a darker Move D track.

‘Cluster‘ is more menacing and is pulled along by an emotional synth with a more prominent bassline, erratic snares and sonorous percussion. Closer to classic 80’s acid perhaps, especially with those cute cow-bells and rumbling toms, but certainly produced with a singularity of style & cohesion. Those delayed abyss dub influences are heard throughout; effect sends on snares, rims and drums and ever-present reverberating claps can be heard across the majority of the 10 tracks.

Lerosa continues to learn by spending time in the studio and perfecting his relationship with his gear; resembling the Japanese concept of ‘kaizen’— a workmanlike, incremental improvement to one’s skills. Muda, in Japanese, refers to wastefulness, a concept he looks to have also applied in making every minute of his tracks count; no extensive intros or ambient interludes, instead, moving directly into track mode.

You also feel this increscent change across the whole album as it moves from melancholy house to sharper tempo’s, verging on dubby techno to a sublime electro house finish. ‘Deadline‘ and ‘Damocles‘ are geared towards the heritage hedonism of the dancefloor; creeping over 130bpm with sharp keys, pulsating static, electrified cowbells, they could easily sit in compatriot Donato Dozzy’s sets. The elegant decaying keys accompanying both provide warmth and add real a masterful touch.

The broken beat in ‘Self Inflicted‘ is calming, dreamy; almost akin to a Kraftwerk/James Stinson experiment gone right. A swirling dominant bassline in ‘Don’t Worry‘ is rhythmical and fun and when paired with the creepy dubbed out vocal and rarefied percussion, a real diamond unfolds. The album reaffirms the consistently unconventional process and sounds that Lerosa has perfected in the past decade and continues to surprise with consistently remarkable results.

‘Bucket Of Eggs’ is out now via Acid Test. Order a vinyl copy from Juno.

Discover more about Lerosa and Acid Test on Inverted Audio.