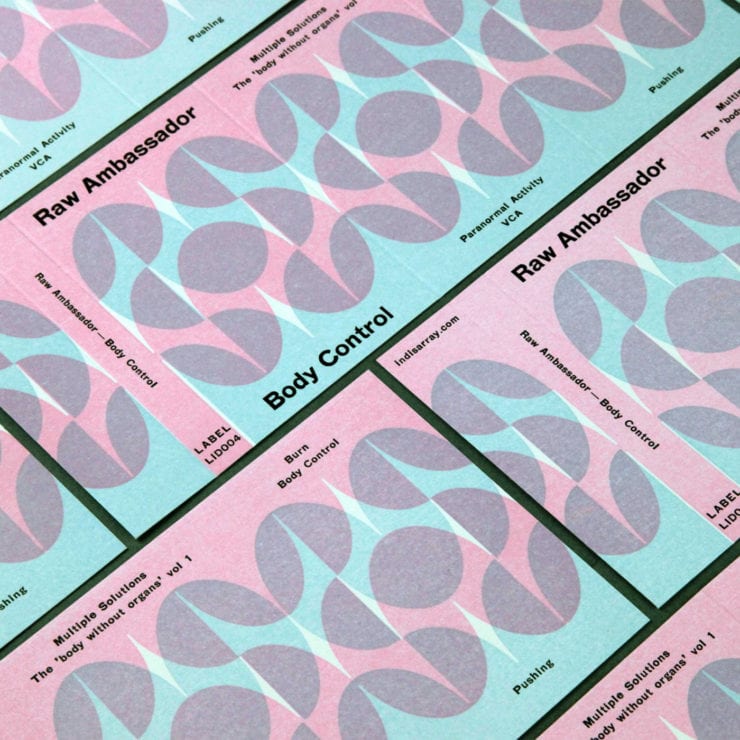 Label In Disarray makes perfect sense as an operation. Rugged raw recordings released in tape format. A name alluding to disruption and chaos. Mechanical music straight from the smokestack. Everything fits.

Championing sonics from the darker end of the spectrum, George Lanham’s imprint has a clear, thought-out identity, equally resonant in disposition as it is output. Contrasting against the glowing landscapes of Lanham’s Catalan home, L.I.D.’s soundscapes tend to take form through harsh frequencies, oil-drenched textures and cranky, blue-collar percussion.

Still in its infancy, the label has celebrated four releases since launching just over a year ago: L/F/D/M’s ardent Lurid Attractions, the unruly ‘Six Sequences‘ EP from Autumns and Lanham’s The Sixteen Steps alias, Santoine and Shun’s molten split EP Programmed Youth, and the tape under the microscope in this review.

Another Ronseal-esque name, Raw Ambassador’s heavy drum work, brutish tones and fierce distortions make up the fourth release on the Badalona-based imprint. With prior excursions on the likes of Mannequin, Smashing Tape Records and Natural Sciences under his Antonio alias, the Italian producer’s sound is consistently saturated with gritty attitude despite shifting structures. Body Control is no exception, offering up seven tracks of grinding EBM and pneumatic industrial.

It’s fair to say that the EP lives up to its title, too. The pulsating synth undulations of opening track ‘Multiple Solutions‘ develop a forceful character alongside the blunt kick drums operating below. Sparse, captive shimmers and reverberating strikes of the ride arrest the listener’s attention, a theme that is continued throughout the tape. ‘The Body Without Organs‘ mirrors the slow-grinding chug pistons guzzling fuel at the start of a day’s work. Harsh screeching frequencies, laborious synth-loops, and dull, thick kicks dominate the ear, with the introduction of shimmering ride cymbals heightening the intensity.

‘Burn‘ ups the tempo to produce the most obvious floor-centric composition on the tape. The track is raw and minimalist: whilst another raw, undulating modular loop announces its presence from the start, the track’s drum work crunches crisply alongside sharp cymbals. Another rough and distorted number, the tape’s title track bears the sort of mechanical menace synonymous with the Italian producer. Frantic slaps of the snare partner up with hollow kicks, with another dominant synth line performing hypnosis.

On the flip side, ‘Paranormal Activity‘ is punk: abrasive, unapologetic and unconventional, achieved through a hauntingly spooky melody and crude percussion. B2 ‘VCA‘ sounds like an assembly line that’s been short-circuited. Leaden strikes of the drum, scything hats and a troubling racket of noise ooze an uneasy grittiness. Concluding the EP, ‘Pushing‘ is fit for the darkroom. Progressing through splintering cymbals and eerie melody, the track embodies the demonic attitude consistent throughout the tape.

‘Body Control’ is out now via Label In Disarray. Order a copy via Bandcamp.

A1. Multiple Solutions
A2. The Body without Organs Vol 1
A3. Burn
A4. Body Control
B1. Paranormal Activity
B2. VCA
B3. Pushing

Discover more about Raw Ambassador and Label In Disarray on Inverted Audio.