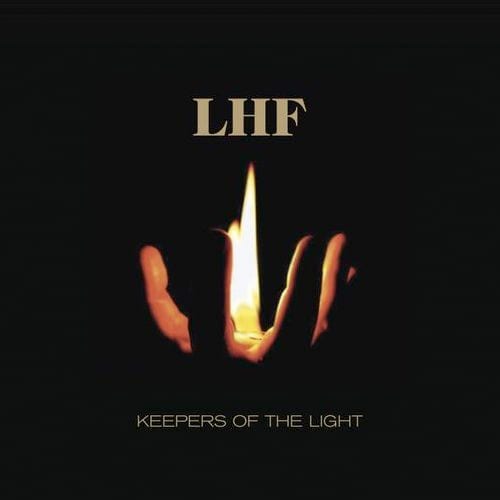 The bloated decline of Dubstep was not a unique moment in musical history, seeing as more genres and sub-genres than I can name have died out in a similar way: some core producers jumping ship, others overextending the genre’s traits to ham-fisted formulas, more still mutating the sound into a pop-friendly affair that courts mainstream fans. It occurs to me that the only reason Dubstep’s fall was such a hot topic, written about by hundreds, is because now millions of people can share their opinions through the internet, and perhaps surprisingly, others actually want to read them. Either way, with Dubstep’s death rattle still fresh in our ears, here comes a release from Keysound set to tell the world that there’s life in the old girl yet.

LHF are a collective of seven London-based producers, of which only four make a showing on their debut album, who on past EPs have showcased an ability to push the established sound in brave and surprising directions. Using technical aspects familiar in Dubstep such as odd time signatures and beat/ bass experimentation, they revitalise a sound that seems now to exist in a largely watered down and derivative landscape. On this mammoth double album, notching up two and a half hours of material, the group collect all the tunes from their previous three EPs (excluding EP2’s Trifle) as well as giving us a host of unreleased tracks to chew on. Here the four producers each show a unique voice while simultaneously establishing a larger aim as a collective, and although it isn’t quite pulled off without a hitch, Keepers Of The Light is truly a remarkable achievement.

Whichever producer is at the helm of a particular track, there’s clearly a lot of skill and thought put into these tunes, with expert beat-science combined with a deep sense of atmosphere. The atmosphere in question is generally a dark one with a sense of the curiosity of exploration to its sounds, from noir-esque twinkles to tracks that snake structurally in unexpected directions. There’s also a keen element of spirituality to be found in these tunes, evoked through occasional Eastern melodies and religious samples. And what samples they are. Any source material is up for grabs, from Sun Ra and Wu Tang skits to dialogue from The Matrix and even the Lord of the Rings theme which pops up in Double Helix’s Voyages. While ripe for a game of sample-spotting, this is also symbolic of LHF’s general melting pot approach to their sound. Though clearly the LP is sonically a product of London, in a way it is also representative of the capital’s cultural mix and our post-everything culture where we can take, and re-interpret, whatever source material however we want. Simultaneously the group do a great job throughout of mining dance music’s past, and while Dubstep is the clear touchstone there are superb experimentations with Junglist rhythms, Ambient stretches and warped Hip Hop.

Each of these producers makes tunes that are in turn exciting, surprising and satisfying, but a clear voice can still be heard from each across Keepers Of The Light. And while all definitely have their moments, Double Helix is for me the star of this particular show. Helix excels in crafting deep cinematic atmospheres, frequently incorporating scifi touches, and anchoring them to dark Garage rhythms. Nowhere is this clearer than on the phenomenal Chamber Of Light, where a sharp selection of percussive layers jolt and shimmy beneath tight vocal samples and big grime synths. A similar success in pulled off in adjacent Bass 2 Dark, with a mysterious melodic snatch duelling with dark drumwork, and on early stunner LDN which simmers menacingly, encapsulating Helix’s keen control over space and atmosphere in his tracks. Elsewhere Inferno takes Loleatta Holloway’s famous ‘burning up’ sample and takes it down to hell, sonically assaulting the tinny sample from all angles, while bonus track Sonoluminescence is a more spacious and exploratory take on the sound.

Amen Ra makes up for the majority of the album along with Helix, and presents a less menacing selection of rhythmic explorations, deviating everywhere from Hip Hop to Halfstep. His tracks are full of strange, bouncing effects but never lose their groove, such as in the rolling saccharine assault of Candy Rain. He also produces what might just be the LP’s standout track in the transcendent Akashic Visions, combining mystical vocal cries with pacing beats and squiggly videogame synths. Similarly impressive is Essence Investigation, applying Eastern melodic touches to a loping bed of fractured Hip Hop beats to create a tune that sounds as unusual as it does impressive.

The other two producers make up significantly less of the release but are still well worth the inclusion. Indeed, No Fixed Abode offers up the most consistently unexpected and exhilarating tunes on display, frequently applying culturally diverse melodies and samples in single tunes (as is appropriate really, given his moniker). He opens both discs in style, with Secret Lagoon transforming from a woozy ambient stretch to a tough and jangling percussive workout, while Strangelands is an impressively indefinable interlude marrying fuzzy chimes with a muffled sample of a man talking and singing slightly out of key. Both of Abode’s full productions prove to be highlights of the album, with Sunset (Mumbai Slum Edition) proving an early ethnic standout while Indian Street Slang ricochets between Eastern lullaby and instrumental Hip Hop by way of a phenomenal screeching synth that really defines the track. Low Density Matter only contributes two tunes out of the twenty-seven on offer, but Blue Steel in particular is worth a listen, with its masterful jazzy riffs complimenting a soundfield of light percussion that paces and prowls alongside a well applied array of vocal cuts.

Having established that there’s good material here, and lots of it, a review wouldn’t be complete without bringing into question the length of this release. Because of the quality of production the music never gets dull over its 150 minute runtime but as a listener you do start to lose a sense of each individual track, which is a shame because there’s so much to love. This is probably down to the similarity of a lot of the noises and timbres used within each artist’s selection, and means that you won’t be sitting down frequently to give Keepers Of The Light a listen from start to finish. On the other hand, I’d argue that it’s almost impossible for a single group to put out two-and-a-half hours of Dubstep that you’d happily listen to in one go, and LHF pull it off better than I ever could have imagined. The tracks on show are constantly engaging and seem to be sequenced for the sake of variation rather than a smooth listen, lending the LP the feeling of an anthology more than an album which it is probably best to dip into rather than trying to tackle from start to finish. Another minor criticism is that occasionally the tracks can go on a bit without a whole lot of variation, particularly in the final run of Double Helix’s productions, and this means that good ideas get mired in repetitive percussive stretches and feel unmemorable in comparison to tracks that are presented more concisely and with greater variation.

Nevertheless, as an overall achievement Keepers Of The Light is nothing short of staggering, as four producers present an entirely unique vision that is consistently a joy to behold. With reports that the collective are sitting on more than 1000 unreleased tunes it doesn’t look like LHF’s star is going to burn out anytime soon, and as a primary mission statement this LP could hardly be stronger.