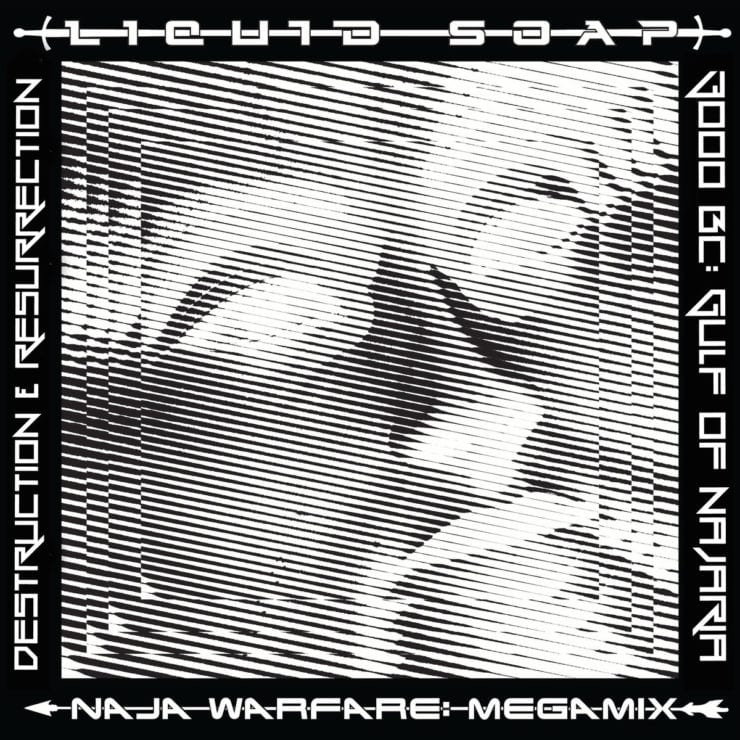 Having plied his trade in the back shop of the New York underground through a multitude of roles and endeavours, John Barclay has spared no efforts in helping sculpt the city’s nightlife landscape as we know it: co-founding Bushwick techno clubhouse Bossa Nova Civic Club, outlaw DIY venues 285 Kent and Trip House, White Label Yerba Mate Soda as well as taking part in the recent and longed-for repeal of NYC’s infamous prohibition-era Cabaret (alias “No Dancing”) Law.

Even though he’s got such an impressive background and experience behind him as an “entrepreneur”, Barclay was yet to spread his wings as a solo artist, and his debut record as Liquid Soap for Brooklyn via New Jersey’s 2MR sure sounds like the very idea of a life-affirming artistic manifesto.

A conceptual record in essence, ‘Naja Warfare‘ requires a little context to be apprehended in all its magnitude and symbolic force. This debut EP finds Barclay telling the musical tale of the Naja, an ancient people politically betrayed by its neighbours. The Naja barely escape violent annihilation and then establish an alliance with an exiled civilisation endowed with supernatural abilities. After a period of reconstruction, the Naja return to fight for their ancestral homeland.

Now that the scene’s laid in your mind, figure yourself immersive lush and craggy electroid reliefs, rife with verbed-out drums, bumpy synth leads and trance-inducing chords, all laced up in a hallucinated and organically-woven recital of sorts. Surfing the secret flows of consciousness, ‘Naja Warfare‘ captivates as much as it dazzles, innervating its tried-and-tested 4/4 dynamics with glowing elements of sci-fi heroics and forward-thinking, off-piste engineering.

Setting Barclay’s intricate narrative in motion, ‘Naja Genesis‘ eases us into a world of stark contrast and deceptive sensations, as it oscillates from the languid movement of wistful strings to rabid, tape-echoed analogue bursts, through reptilian bass assaults and glitchy vox spurts gushing out of a saturated boombox again. The slo-flowing quiet of the Naja’s ancient folklore purely and simply blacks out under the new reign’s martial onslaughts.

But as with all good story of subjection and salutary uprising, Liquid Soap ‘Naja Warfare‘ awakens dormant forces and buried energies to overcome the lost dynasty’s fate. Unsheathing the sword of justice, ‘Battle Of Xengani‘ is sure to blow the winds of euphoria across dancefloors with its largely irresistible hail of jacking percs bounce, laser-blasting synths and untamed bleepy cannonades.

In a recent interview with Noisey, Barclay gives further insight into the record’s raison d’être and aspirations: “I’ve always silenced this 10 year-old boy voice within me that wants to put a medieval harp or a sword battle over a beat, and now I’m letting him speak“. Drenched in soothing spirituality and a touch of vaporous Tolkien-like mystique, the incantatory ‘Desert Elf‘ blends the spaciousness of ambient with exotica-friendly harps and flat toned steelpans for what results in a sensuous, fantasy-tinged drifter of the finest ilk.

Lifting us off to an ethereally deep but ambitious finale, ‘Sexxxi Alien‘ tops Liquid Soap’s debut EP on a much touching and otherworldly sensual note, as its mix of washed-out pads, sliced-and-diced vox slivers and chirpy programming paints rainbow-like colours in the eternal sky. If this one, as the press release amusingly notices, is “suited better for sci-fi teenagers than seasoned German techno purists“, Barclay actually succeeds where lots of producers have hit a brick wall, carving out a record that feels as inaccessibly mysterious as it sounds intimately familiar.

‘Naja Warfare’ EP is scheduled for release via 2MR on 12th April, order a copy from Bandcamp.

Discover more about Liquid Soap and 2MR on Inverted Audio.