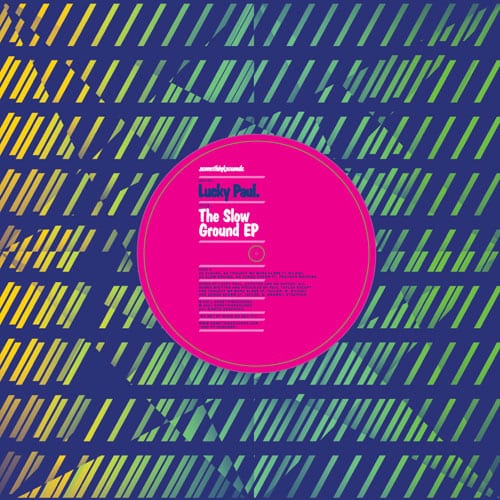 Some music is so subtly, beautifully filthy that it begins to feel rude to listen in on it happening. But by then of course you’re hooked. That’s at least half the appeal of ‘The Slow Ground’. New Zealand born producer Lucky Paul is a relatively new name, but he’s already dug deep and traveled wide in his global pilgrimage of musical inspiration, having spent a year studying traditional percussion in Brazil at 17, living with Indian Sarod player Pandit Vikash Maharaj, and learning from a Pansori singer in Korea who in turn learned his art by singing into a waterfall for five years. He now resides and works full time on music in Berlin, including sessioning as a drummer for the likes of Mocky and Chilly Gonzalez.

This latest release on somethinksounds, a label with only three hand picked gem-like releases to date (Tommy Tempa’s Quixotic EP and Eliphino’s Undivided Whole EP are both worth getting to know), feels like a collaborative amalgamation of all of the above.  A slow cooked mix of metaphysical and concrete, organic and electronic, lovingly ground together in a futuristic hip hop tinged headspace for the visceral contemplation of carnal things.

Opening track “Clouds” sounds like Lucky Paul sampled the thundery percussion jamming session of a clan of celestial giants he encountered high up in an Amazonian cloud forest while in Brazil, their big clumsy hands banging out something heavy and rumbling, intertwined with incomprehensible vocals (that at one point really sound like the Bee Gees singing ‘Hare Krishna’, I swear), before winding down and stumbling off into the night.

The EP’s title track sees a heavy, inebriated bass weigh down the to-ing and fro-ing of a scratchy choral sample, hazy piano and woody wind sounds, peppered with small smatterings of high pitched bell twangs. These make one last lingering attempt to pick you up before the final non-remix track ‘Demon Spawn’ stomps in followed by the vocals of a disorientated, emotional and slightly off key Pegasus Warning (Jamie Lidell’s drummer Guillermo Brown).

He stumbles around with the beat like he’s found himself on the wrong side of two parallel universes. ‘I’m trapped inside a mushroom cloud’, ‘too cool to trust you again, been an awful friend’ he laments, before musing over and over that he tries to look away but just can’t. We hear you dude. The Gang Colours’ remix straight after this seems as if it’s been specifically positioned to pluck us out of this, quite frankly, rather trippy situation, tidying things up and depositing us a tiny bit closer to the reality we might have been in before we got swept up in this delirious, crawling, soulful and very promising debut EP.