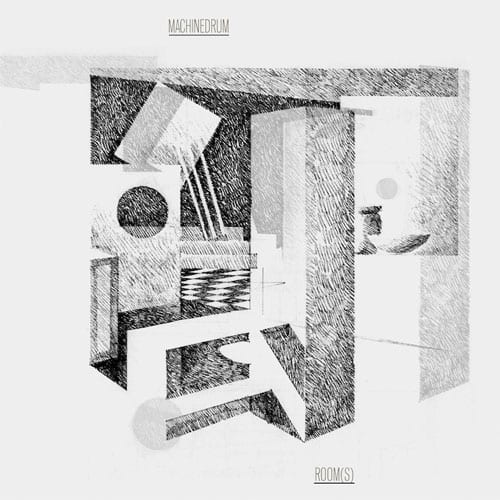 There’s been a flurry of interest in Machinedrum lately – sparked by a clutch of single and EP releases – and ‘Room(s)’ is the album to back up all the hype. His sixth album in fact, though for many this will be their first encounter with the cult New York producer known to his parents as Travis Stewart, whose unique career path has taken him from hip hop releases on Miami electronica label Merck to his current incarnation as part of Planet Mu’s stable of bass music futurists.

If, as seems to be implied, these tracks are all rooms in the same house, then it’s a house with an impressively consistent decorative scheme. Warm synth pads and fragmented, autotuned vocals predominate, and everything’s drenched in cavernous synthetic reverb, with intricate drumwork poking through the gauze. The risk with such a tight focus is that the tracks end up lacking variety – and it’s certainly true that by ‘Door(s)’, the album’s penultimate track, Machinedrum’s calling cards are getting a little fatiguing to the ear. But when you consider how the album was made – apparently each track was brought close to completion in a single session, often while traveling, so that the original idea couldn’t become stale or overworked – ‘Room(s)’ starts to feel more like a collection of well-formed sketches rather than an attempt at an epic, overarching creative statement.

There are plenty of highlights on offer. ‘Sacred Frequency’ seems to be perpetually disappearing into the distant haze, like the closing euphoria of an 80s power ballad looped cunningly so that the joins can’t be heard; the structural equivalent of a Shepard tone. It’s a trick that’s replicated just as effectively in the blissed-out ‘Gbye’, the usual autotuned ululations somersaulting over the top, something like a digi-fied happy hardcore breakdown trapped in oddly melancholy stasis. Elsewhere, ‘Come1’ embodies the broad spectrum of Stewart’s aesthetic – a UK hardcore/Chicago footwork hybrid at the front end, dancefloor-ready and pumped up on digital steroids, and an introspective bedroom ballad at the back, featuring the producer’s own tremulous vocals and acoustic guitar lines seemingly recorded through a laptop mic.

Weaker moments stray into the comfortably anthemic, particularly towards the end of the album – ‘Lay Me Down’ and washy closer ‘Where Did We Go Wrong?’ are both culprits. But Machinedrum’s stylistic maneuvers never feel cynical or calculated, and to create an album with such glaring pop-crossover appeal without embarking on a campaign of shameless self-dilution is an admirable feat.

The lasting impression of the album is that it’s oddly both lo-fi and hi-fi at the same time. Stewart degrades his sounds in a way that’s poised perfectly between retro-fetishist vinyl and tape crackle (think Boards of Canada, Bibio) and techno-fetishist washes of white noise (think most of Berlin for the past two decades). From one perspective, this is the dichotomy at the heart of ‘Room(s)’; on the one hand it’s the work of a heart-on-sleeve bedroom producer with a deep understanding of the music of the past – UK hardcore, hip hop – and on the other a dancefloor-savvy beatmaker who harnesses the plastic emotive potential of autotune and the dystopian percussive constructions of Juke and footwork to his own ends.

When the balance works, it’s diamond. ‘U Don’t Survive’ showcases the delicately tuned chaos that makes this album so interesting: soft-edged chords and restrained but funky breakbeats are lowered gently in and out of the dense digital mush, while subbass rumbles purposefully underneath and Stewart’s androgynous vocalist intones, ‘now is the time to be alive’. For Machinedrum, poised between US and UK, dancefloor and bedroom, it undoubtedly is.