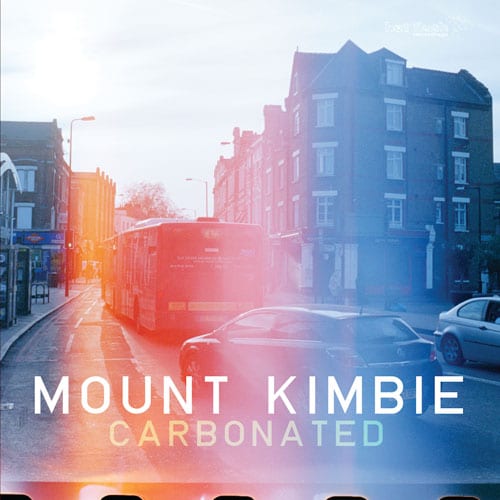 ‘Carbonated’ always stood out on ‘Crooks and Lovers‘. Alongside ‘Mayor’, it was Mount Kimbie‘s best melodic cacophony since ‘Maybes’ and ‘Sketch on Glass’, and worked the pop angle the group plays best into superb overdrive.

This EP of the same title follows on the premise from last year’s ‘Remixes’ Part 1 & 2, but is supplemented by the further addition of two new Kimbie originals. After remixes by heavyweights like Instra:mental, James Blake and SCB in the past, ‘Carbonated’ brings some different faces into the mix – including Airhead, Peter Van Hoesen and Klaus.

The eponymous number opens proceedings, still retaining its wispy hop and saccharine charm, one year on. Its subtle hissing and brilliant melody continues to work, and remains a benchmark tune for this alley of clever post-garage.

‘Flux’ is a new tune, which skips along the trademark Kimbie song structure, before lifting halfway through and never looking back. The last third of the tune hits full throttle, expertly tying together R&B cuts and puppy-like grabs over a tidy shuffle and heavily phasered approach. This combination of melody and texture is their forte, and their authoritative hold on it is ever clear.

‘Bave’s Chords’ sees Kai Campos’ chords on twanged guitars, with tape-deck fidelity and zero-gravity serving as their guide. It initially ambles through misty awkwardness, before blossoming into off-kilter tunings. clean organs and midnight R&B.  Melodies then run up and down a sexy veneer, forming a brief, but very cohesive layer of mega pop. This track shows the group’s schematics are heading into even more sparsely decorated rhythmic territory.

Klaus AKA Nick Sigworth offers a completely minimal perspective to minor album cut ‘Adriatic’. It consists of an overly distorted THX sub-bass, gothic strings, and refrains of gargoyles and bells. Klaus turns what was a brief afterthought into a never-ending loop of what is essentially empty soundtrack work. It’s a doom-laden repetition that unfortunately fails to develop into something more.

The remix of ‘Carbonated’ by Airhead AKA Rob McAndrews is fairly decent. Its some oddly-colorful stuff, saving the sine wave whirl of the original, whilst projecting ocean size guitars over some technicolor post-rock vibes. It does take its time though.

Brussel’s Peter Van Hoesen brings a melodic, techy flair to his take on ‘Carbonated’, commanding a pulsing acid bassline amidst a flurry of steaming 808 cymbals. Van Hoesen drizzles the original vocal samples over the top, rendering those dreamy syllables speechless. Van Hoesen’s ravey take gives the tune a proper dancefloor edge, and is vibrantly club wise. However, it’s short of the mammoth levels of techno that both Instra:mental and SCB hit on last year’s ‘Remixes’.

‘Carbonated’ is a varied companion to the growing collection of Kimbie EPs. It showcases the duo’s continuing exuberance of their pop affability, even as they work against an increasingly-jarring backdrop. However, this time around, their interest in seeing others remold their work has led to some markedly mixed results.