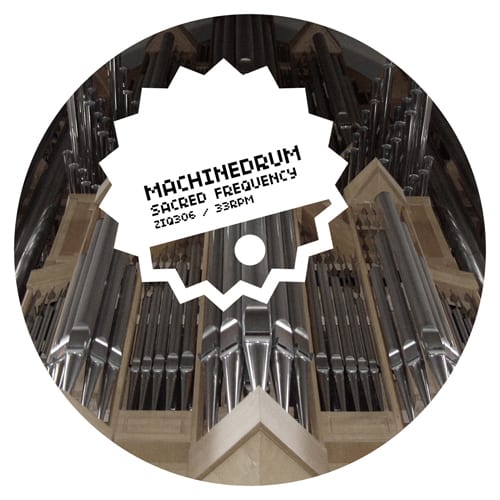 With seven albums to his name and over a decade in the limelight, New York producer Machinedrum is not exactly what you’d call a new phenomenon. The man born Travis Stewart has trodden a singular path across the electronic music landscape, drawing inspiration from IDM and hip hop in the past and, more recently, tackling UK wot-do-u-call-it as one half of the Hotflush-signed Sepalcure. ‘Sacred Frequency’, his first EP for Planet Mu, sees Chicago juke and footwork being thrown into the mix, and seems to have brought the producer new heights of exposure both at home and abroad.

The title track is the most overtly ‘pop’, with a smooth-edged, autotuned vocal (presumably Stewart’s own) weaving its way through clouds of ecstatic synth work. As with the rest of the EP, the producer loses no time in demonstrating his expertise at manipulating the mix; each sonic object seems to be perpetually building up or falling away, elements sliding past each other with practiced ease. Elsewhere, ‘Flycatcha’ brings the Chi-town heat; the ADD rhythmic tics and sample acrobatics of Footwork are transformed into delicate digital filigree, dusting the familiar kick’n’clap template with the kind of exquisite detail which rewards repeated listens.

Meanwhile, ‘Fantastix’ brings Stewart’s longtime infatuation with UK hardcore and early jungle to the fore. A helium vocal rides high over hyperactive breakbeats, perfectly poised between ra-ta-tat junglism and a lunging halftime borrowed from hip hop. At its peak, the track touches on bubblegum euphoria, but with an underlying urgency which keeps things feeling vital.

Closing proceedings, ‘Listen 2 Me’ is a masterwork of tension and release. Its hyperactive UKF rhythms build and build, time-worn pads and snatches of vocal sailing hypnotically past, like we’re heading for the biggest drop you’ve ever heard but the goalposts keep getting moved back; truly one to get the skin tingling. With technical chops like these, and such a distinctive musical vision, it’s bizarre that Stewart hasn’t yet achieved wider recognition. With any luck, as with so many artists before, Planet Mu will be his gateway to success.