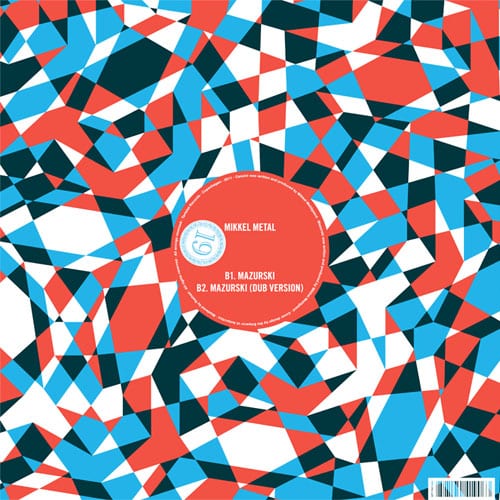 Mikkel Metal is an electronic producer from Copenhagen, Denmark. He’s been creating deep atmospheric dub techno for the past 11 years and has remained loyal up until now to the Copenhagen based imprint Echochord, having released three albums and thirteen EPs with them. He now ventures onto Tartelet Records with his exquisite Cassini/Mazurski EP.

Since its inception, the Tartelet crew have been on an ambitious, idealistic mission to put out the freshest, strangest and most remarkable electronic music. In 2010 they began releasing Kenton Slash Demon’s epic Schwarzschild Trilogy as well as Brandt Brauer Frick‘s ‘Bop‘, decreeing to the world that they’re a label that aren’t afraid to release music that doesn’t fit into the mundane, but is in fact exceptionally advanced.

Although Mikkel Metal is a newcomer to the Tartelet family, they both share the fact that they’re based in Copenhagen. His new EP offers three tracks heavily laden in the realms of dub techno. Cassini’s immediate atmosphere expands and contorts as if it’s under huge amounts of pressure, a kick drum keeps it inline until a swollen bass line seeps in.  After a minute or so it picks up and develops the groove into a churning rhythm, synths are introduced chopping up its solidarity. Cassini is a track that should be reserved for your 5am DJ slot, or for deep meditative grooves. It’s a track that I couldn’t play out to others, I’d be scared that it’s lo slung, down tempo aura, would cement peoples feet to the ground, however if you’re after that effect, post 5 in the morning kind of vibe, then Cassini is the track for you.

Mazurski is a lot grittier, it begins with shimmering pads that immediately cut through any dark mood that Cassini may have created, the drum tempo is sped up as more rough drums are added into the mix. The sounds found within are most defining; its symbols recapture the noise of a monkey drummer bashing its drum, its mechanical clash and robotic programing express a raw house element to the track, which if you’re into the sounds of Kassem Mosse, Mazurski is a seamless alternative. As it ventures deeper into the track acid based chords sink into the melody driving the track further into space.

The final track is a dub version of Mazurski, it’s relatively the same throughout although it’s been beaten and encrusted even deeper.  The vocal elements have been edited, twisted and recoiled throughout, it’s a nice effect, but for me the original version steals the show. Overall this EP is made for people who thrive on moody atmospheres and deep melodies; it’s an unexpected yet grande addition to the Tartelet discography and has brought a completely new dimension and sound to the label, a record that’s highly recommended and regarded in my mind.