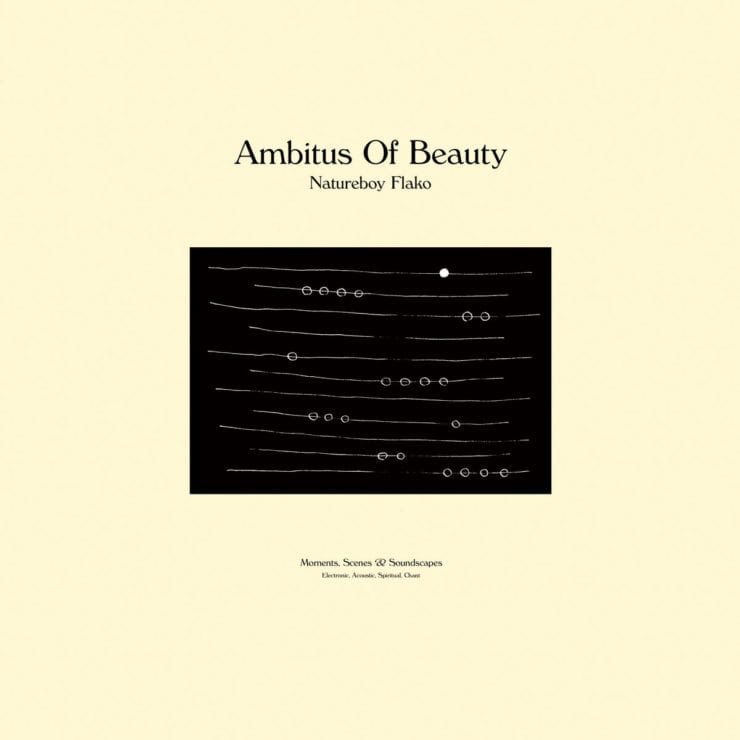 In Latin, ambitus literally means “the going round”, and the word has been used in a variety of contexts to refer to edges and boundaries. I can see why Dario Rojo Guerra included it in the title of his latest album. A sense of periphery pervades it. Subtitled ‘Moments, Scenes & Soundscapes’, Natureboy Flako‘s new release has a distinctly cinematic air. Each ‘moment’ could accompany a snapshot in time, a past event able to be viewed again and again, but never relived. It feels as if one is constantly ‘listening from afar’, as Flako keeps the fourth wall fully in place throughout.

With 16 tracks, Ambitus of Beauty appears a hefty package of music at first glance. However, the majority of the cuts are short. A substantial proportion fall under two minutes, and seemingly fade out almost as soon as they begin. Flako concentrates on repeating sets of sounds rather than adding new material, and this concision is all part of the appeal. Time feels as if it has been suspended, as the ears indulge in the present, rather than anticipate what’s to come.

The tracks that cross the three-minute mark are more dynamic, as the increased time allowance provides space for development and pacing. ‘Silver Forest Spirits’ – blissful and languorous – is the highlight amongst the lengthier cuts. At first, its bubbling arpeggios are hushed, stifled like air bubbles confined by water. Guitar and keys soon cast their rays of light through the arboreal canopy, and are soon joined by hummed vocals that glide above the treetops like eagles.

Nostalgia suffuses Ambitus of Beauty, from the track titles (‘Memory Images’) to Flako’s selection of timbres. The capricious arpeggios and spiralling melodies of ‘Crystals’, ‘Continued Dream’ and ‘Towards The Sun’ evoke the synths on Mort Garson’s cult 1976 release: Mother Earth’s Plantasia. ‘Mantra Para Nunu’ – meditational with a hint of sanguinity – could belong in Laraaji’s collection of Vision Songs. Even ‘Contemplation’ – the most contemporary-sounding cut – includes an analog synth melody, although its usually bright, searing tone has been dampened.

‘Susurro’, the closing track, achieves the perfect marriage of old and new. The arrangement juxtaposes a Roland Juno bassline and warm Mediterranean melodies with restless hi-hats that pull towards Trap. Rather than embrace the obvious and add a kick and snare, ‘Susurro’ – like all else on this album – prefers to bask in the periphery and embrace life on the edge.

‘Ambitus Of Beauty’ is out 15 May via Materialzed Moments. Order a copy on Bandcamp.