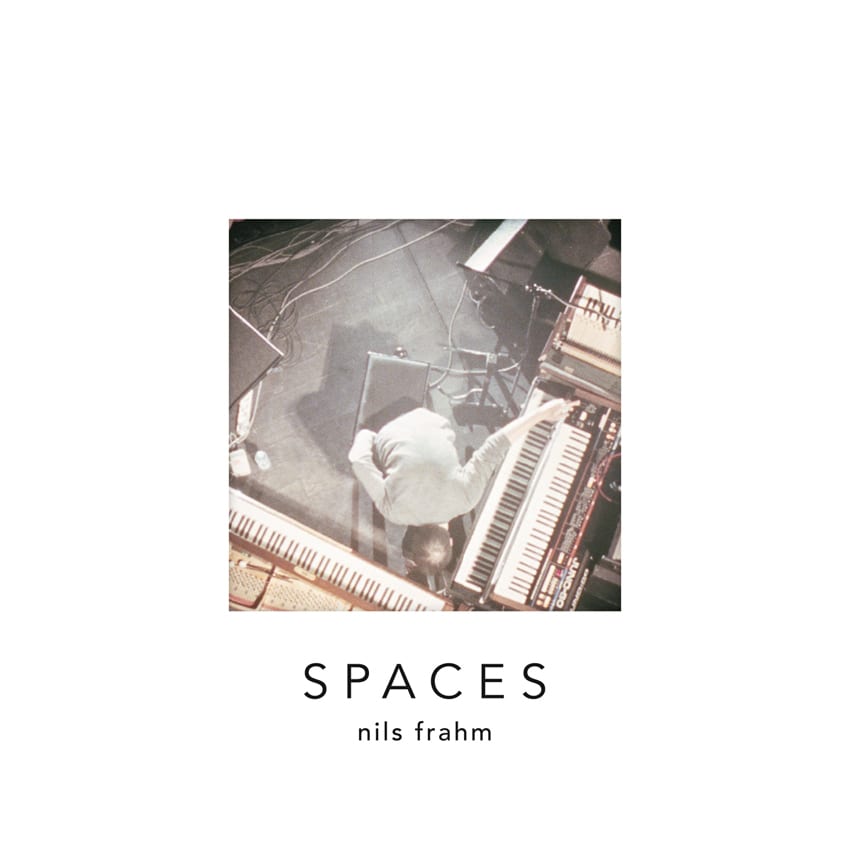 Anybody who has seen Nils Frahm live and heard his recorded material will be aware of the difference between the experiences. Albums such as ‘Felt’ and last years ‘Screws’ are works of sparse beauty. Built largely around piano and occasional subtle additions they are testaments to space and texture. Dynamic shifts are subtle and rare, the tracks floating together through long gentle melodies. However Frahm’s live show is built on a high energy engagement with his performance space and audience, mixing bombastic blasts of synth alongside aching piano solos.

‘Spaces’ is an attempt to replicate the experience of Frahm live. It is a live album, but a unique one. On the one hand there are occasional bursts of audience applause, a reminder that these tracks were not recorded in the isolation of a studio. However this isn’t the recording of a single concert, rather extracts from several in vastly different venues over a couple of years. The album is an attempt to capture specific moments, different points in space and time where the audio was dictated by the same performer. When Frahm plays live there is a sense of suspense and interaction, a feeling of spontaneity generated by a three way dialogue between the artist, the audience and the characteristics of the venue. A live album compiled from one show couldn’t have captured the difference in experience from one night and venue to the next.

A feeling of unpredictability is maintained throughout ‘Spaces’. The lines between what is and isn’t planned are hard to locate. The Opening track ‘An Aborted Beginning’ is a percussive piece made from Frahm playing his piano like a drum kit, the cavernous echo of the venue giving it a dub ambience. A little burble of electronics begin before the track abruptly ends, an uncomfortable silence followed by awkward applause. Live albums normally try to capture a perfect performance, here there is a happiness to publish joyful public experimentation. Later in the album we get medley’s of several tracks together, for instance ‘Unter-Tristana-Ambre’, the segues between songs sound as if they have been decided on the spot, a feeling of improvising around several ideas at the artists whim.

The album lurches through a huge range of styles, more so than on any of Frahms studio efforts. ‘For Peter-Toilet Brushes-More’ starts with epic blasts of synth before breaking down into another percussive piece made from Frahm playing the piano with toilet brushes. ‘Said and Done’ is a slow building minimalist composition that sits somewhere between Erased Tapes label mate Lubomyr Melnyk and Steve Reich. The diversity is unified around Frahms unique sense of melody – a kind of child like simplicity that shines through in both the barest and most epic pieces. It occasionally seems disjointed, lacking the coherence of ‘Screws’ or ‘Felt’, but this is an inevitable part of the process of how the album was compiled and the intention to capture the difference in performances.

No live album is ever going to capture the true energy of seeing an artist live, and no live recording will ever have the coherence found on a studio album. Spaces works instead as exactly what its title suggests. A record of a unique artist using his huge breadth of skill to imprint his personality into the spaces he performs in.

Watch our video feature and read our extensive interview with Nils Frahm.