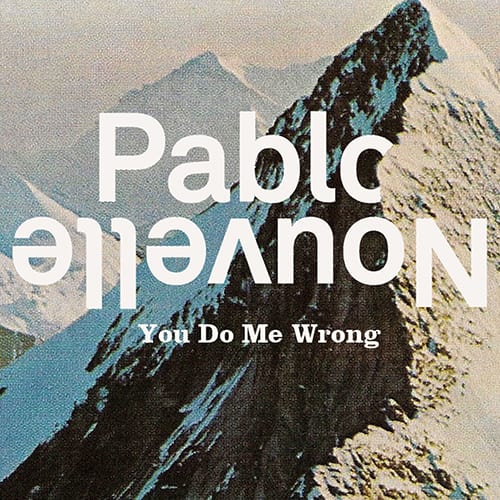 An inevitable aspect of being a music critic is the impossible amount of music you’re sent every week by artists: revered legends, PR-crazed labels and budding young unknowns constantly fill your inbox with downloads and Soundcloud links. It’s impossible to get through and listen to everything, so as a writer you have to become accustomed to rooting out the things that look like they sound good, scanning for familiar names or keywords to let you know you’re on to something. But every so often you just listen to a release by chance and it really appeals, as was the case for me with the second single courtesy of Swiss producer Pablo Nouvelle, aka Fabio Friedli.

Having given a brief listen to his first single, Is It Okay, on release a few months ago, I encountered what appeared to be a fairly run-of-the-mill mixture of Hip Hop instrumentals glazed with poppy vocals and structures, but here the Swiss producer has really stepped up his game. It appears that this coincided with his discovery of soul music; “It was like looking behind the curtain of hip hop and understanding where it all came from. That changed my life.” By trading a pop veneer for relaxed instrumentals and soul samples, Friedli has created a quiet, relaxed single that wows on repeated listens just as much due to its simplicity as the production chops behind it.

First cut You Do Me Wrong is catchy and smooth, with a slow-mo hip hop groove underlying a warm guitar loop and a perfectly chosen vocal line (clipped from Marvin Gaye’s Ain’t That Peculiar) that emotes through its simplicity and repetition, lengthening occasionally to give the listener an alluring glimpse of the full phrase. It’s a short track and the minimal structure seems a well-considered decision rather than a lack of know-how, as the clipped vocal additions and beatless loop at the close perfectly add to the rich, chilled out sound.

B-side Be True To Me is admittedly a very similar track, employing another Gaye sample (this time it’s I’ll Be Doggone) with super-slow hip hop beats, hazy synth-work and a nagging one-line vocal that will squirrel inside your head and refuse to leave you alone. These tracks might not sound all that different, and this release is admittedly no great innovation, but allow these tracks time and you’ll find them increasingly enticing, with an impressive yet simple approach to mood and organic instrumentation that will create a deep, soulful atmosphere for those lazy summer nights.