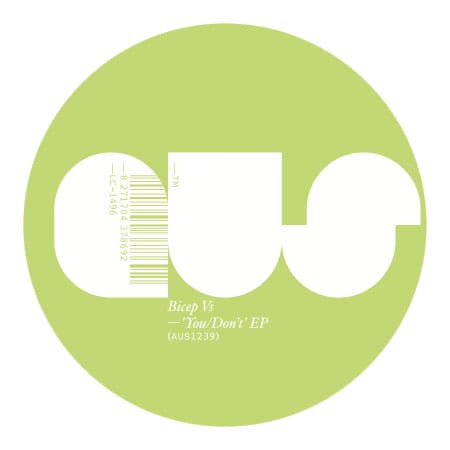 Will Saul’s Aus Music imprint has been going from strength to strength and this new 12″ clearly continues the upwards trajectory. This time round, Northern Irish duo Bicep make their label debut and go head to head with two buddies for the lead tracks – Ejeca on “You” and Omar Odyssey on “Don’t“, with Steffi stepping up on remix duties for the former.

The original mix of “You” is pure UK warehouse majesty. From the opening seconds of its chord-driven intro, getting hands and lighters in the air, to the sparse cowbell and skippy hi-hat percussion, to the wall-quaking bassline – all this before the introduction of a signature chopped-up diva – it may sound formulaic but every now and again a track comes along that is truly outstanding and this is one such.

I’m unable to put my finger on how or why, but the vibe of this track really takes me back to the early 90’s UK rave scene – I can practically hear the whistle posse and smell the Vicks Vapo-rub. But there’s no cheesy stabs to be found, nothing obvious – in fact there’s barely a kick drum to speak of. It’s the art of understatement and emotion which give the track its considerable velocity, a rare trick these days. Although there is a lingering fear that it may be teasing us towards a nasty drum roll breakdown or similar default position, it steadfastly refuses to give in to that temptation. Whilst this is refreshing, it does leave a lingering notion that perhaps the track never quite reached its ultimate destination – but in the hands of the right DJ this is not going to be an issue as there are many potential routes to follow it with. Besides, it’s a fact that many of the best tunes are over too soon.

Steffi takes time out from her Panorama Bar residency to handle remix duties and whilst she does a reasonable job of turning in a more straight-up “house” version of the tune, it’s the addition of more common elements that mean this can’t ever compete with the unique vibe of the original. It drives along nicely enough and will work on the floor but it just doesn’t hit with nearly the same impact – something of a wasted opportunity, perhaps it would have been better to keep a UK producer at the controls for the remix? At over seven minutes there just isn’t enough substance here to hold the attention for that long.

On the flip, Bicep turn to Omar Odyssey and “Don’t” is another winner, though heading solidly for much housier terrain – with a large amount of stomp and funk on display. As with “You” there is a reliance on sparseness, chopped vocals and that all-important bassline, but there’s a slower tempo and a more relaxed build-up, permeated with single-note hits and a subtle organ refrain. The production is first rate and the bottom end of this track will cause devastation on the right sound system. In many ways it’s the perfect track to segue from the warm-up section of a night into something dirtier – I just can’t see how a crowd could resist the groove.

For my money, this is one of the strongest releases on this label and sets the bar high for forthcoming releases. I’m not sure the remix was really necessary but it does add another angle to the package. Like it or not, it matters not since the two lead cuts are highly polished diamonds – “You“, in particular, deserving of bona fide summer anthem status on the more discerning floors.