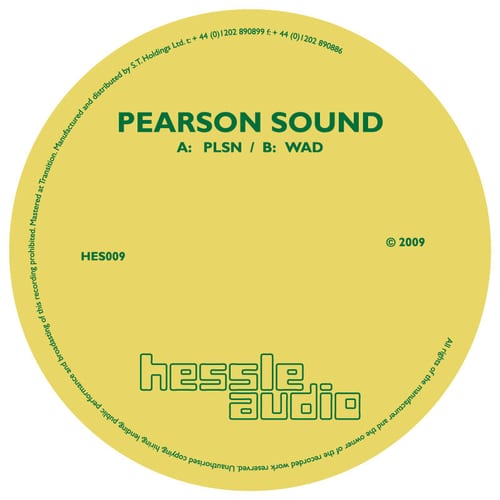 Another amazing piece of wax from the Hessle Audio camp, though were you really expecting anything less. Pearson Sound is part label honcho Ramadanman’s house infused alter ego.This release sees his style develop that inch further into the almost impossible to determine, and to be honest his ever shifting focus is what makes his music so flippin’ good. So this is a real treat.

PLSN builds with that same ever forward momentum of Peverelist’s Clunk Click and Every Trip, only with that slinky, subtle use of space in the tune. It has that same feeling Cooly G has mastered, carrying that definitive sense of movement and room within a tune from dubstep into the percussive layering of house. Once it breaks into those wonderful synths though, you begin to see the real attraction of this track. Your ears melt to the sound of David Kennedy’s masterful production, and although the synth sounds are not particularly complicated their softness is almost overwhelming.

The initial gem on this release though is WAD, a track that has been rinsed by almost every ‘What do you call it?’ DJ of the moment. A tribal breakdown of straight up rhythmic brilliance. This one comes a lot harder and more instantly dance friendly. Easily confusable with about three or four other tunes of a very similar nature, it’s certainly not a totally different style from his recent release Revenue – but this is absolutely no bad thing. Once the gap breaks though, when that vocal lingers and the bass pressure woozes, it’s not hard to fall in love with this release.

Some might say Rama’s recent productions are a little safe, a little too polite. Thing is it takes guts to show this kind of restraint with tracks, especially when taking such heavy influence from the sound of Funky. A genre that, although showing an initial burst of progressive brilliance, is often a little lacking in imagination. The grey areas in music will always be the most interesting, and this is about as grey as they come so jump on it.