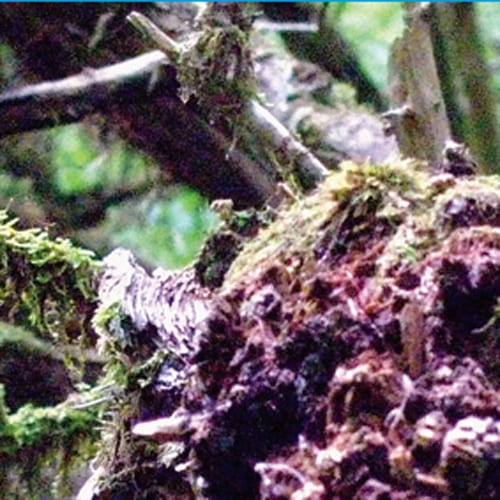 Four years have passed since Pole released his sixth album of minimally paced dub ‘Steingarten‘. This break allowed Stefan to rekindle his musical direction and produce new music under the guise of Pole for a three-part EP series to precede his forthcoming album, due in 2012. ‘Waldgeschichten’ is the first of the series and offers reflections of Pole’s past music whilst also presenting a more rhythmic focus and glimpse into his new album.

For most of us four years is a long time to part from the scene and it appears that it’s been a turbulent time for Stefan Betke. 2010 witnessed the final days of operation for ~scape, which Stefan co-founded with Barbara Preisinger in 1999, however after eleven years and fifty-nine releases ~scape as a label is no longer open for business. After releasing such influential and important bodies of work from Jan Jelinek and Deadbeat as well as a whole host of other musicians, including John Tejada, Portable and Frivolous, its departure has left a monumental void in the realms of experimental electronica, glitch and dub. However with ‘Waldgeschichten’, Stefan has founded a new self-titled imprint ‘POLE’ to release his music on, which just so happens to be operated with the aid of Barbara Preisinger.

Pole’s first three albums, a trilogy of self-titled albums, ‘1’, ‘2’ and ‘3’, released between 1998 and 2000, helped push the boundaries of how stripped-down ambient dub could get and are now regarded as some of the most influential albums of crackle-infused dub atmospherics ever to be released. With such a grand reputation and focused audience anticipating Pole’s next release it’s understandable why Stefan took considerable time to create new tracks to progress his unique sonic signature.

To write this review I revisited Pole’s discography and listened to all of his previous albums in order to hear how his musical direction has advanced. Of course ‘Waldgeschichten’ only offers us a glimpse into his new sound, but with tracks like ‘Wipfel’ its safe to say he’s stuck to what he knows best by creating three atmospheric, grooving tracks, replete with the funk of an old rhythm machine and connected through Pole’s typically endless echo chambers.

The track that stands out the most is ‘Wurzel’. Pole adds a more rhythmic beat, yet counteracts it with vast moments of space, creating tension but also adding assurance to the listener that Pole is still the master of minimally focused sound design. ‘Waldgeschichten’ offers two original tracks as well as a dub edit of the first track ‘Wipfel’. All three are heavily indebted to Pole’s old sound signature and each create warming dub atmospheres, perfect for late night grooving and personal headspace. What will follow is unknown for now, however ‘Waldgeschichten’ is a fine start.