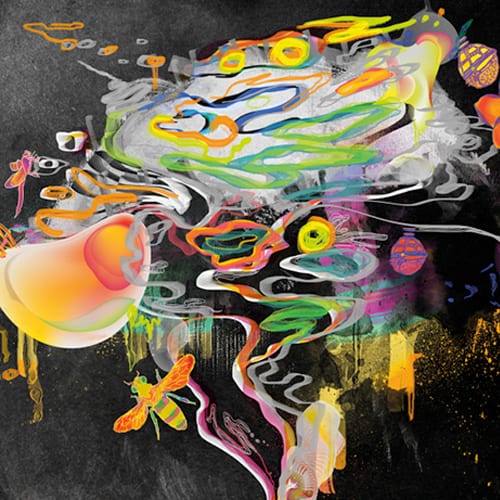 Rarely has the name of an electronic artist so pertinently described their sound as with Camden-based producer Blue Daisy a.k.a Kwesi Darko. As he puts it: ‘This day was a clear blue sky day and I was strolling through my local park, and came across a flower which looked like a Daisy, and it seemed to stand out from the rest on a patch of grass that was ever so green. I interpreted this image as a sign of individuality, an outcast in society; but a product of its own. The green grass represented the sign of greatness to come and on this clear blue sky day the name was born; Blue Daisy, a representative of individuality.’

Make of this what you will, but Blue Daisy’s debut full length, The Sunday Gift certainly makes good on the promise showed when he first came to prominence in the bass scene. Initially exposed by radio play from Mary Anne Hobbs, perennial goddess of the airwaves, his recent releases (the Strings Detached EP, the collaborative Raindrops EP with vocalist Anneka & the 3rd Degree EP) have worked only to raised expectation levels further.

The Sunday Gift is a bold and expansive work containing a hidden darkness, one that recalls a certain Burial amid vocals that seep into the subconscious similar to Massive Attack circa Mezzanine. High praise maybe, but Darko’s real skill in balancing these disparate elements lies in allowing the music time to breathe, while reaching out to form a humane and emotional connection with the listener.

To explain his music further, Darko has been quoted as saying that ‘it’s all from the spirit and soul rather than the mind… I just let my spirit run free in the atmosphere of vision, dreams and abstract angles of projected creative energy’. With this comes a disorientating structure, but one that is all the more engaging and absorbing for it. Each track feels organically pieced together and artfully arranged, sounding more like a free jazz session rather than a rigid twelve bar structure, slowly building around itself to create a vast avant-garde soundscape.

Tracks like ‘Fallin and ‘Raindance’ are just as spiritually plaintive and mournful as their names suggest, eliciting a delicately angelic quality that resonates long after the album has ended, and persists with a refreshing lack of pretension that, as he puts it, is ‘inspired by nature, by everyday life’. A shame then, that with this hip-hop tinged electronica comes the expected lazy comparisons to Flying Lotus, something that Darko openly rejects, and rightly so. A Sunday Gift marks him out as an extremely talented beatsmith in his own right, whose lovingly crafted, richly textured, and deeply atmospheric beats show that he has enough up his sleeve to keep listeners coming back for a long time to come.