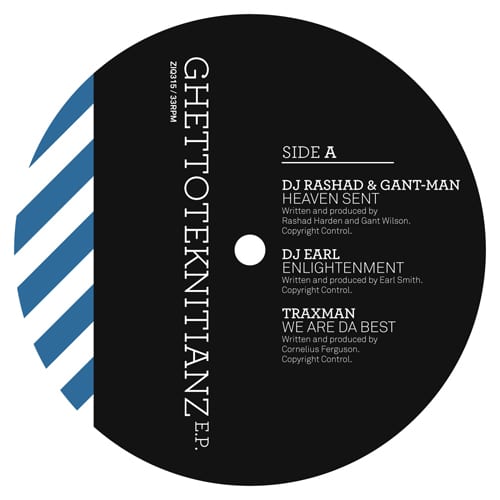 “From this groove came the grooves of all grooves”, runs Chuck Roberts’ famous ‘Our House’ speech. Never has that seemed more true than in 2011, where the genre’s indomitable, decades-old sonic signifiers seem to be bubbling up in virtually every quadrant of UK music. Looped into oblivion and submerged in a thick mulch of sub-bass in DJ Rashad and DJ Manny’s ‘R House’, the speech serves as a timely reminder that Footwork is where the original house sound has got to in 2011; lean and predatory, but still with a kernel of soul at its centre.

But the Ghettoteknitianz EP, Planet Mu’s latest missive from the Chicagoan underground, is much more than just a statement of heritage. Featuring a slew of productions from one of the city’s most formidable cliques (DJs Rashad and DJ Spinn should be ringing bells by now; if you’ve not heard of the others, get to know), it pushes the tight constraints of the sound upwards and outwards, showing that the 160bpm field is far from fallow.

Rashad & Gant-Man’s ‘Heaven Sent’ and Earl’s ‘Enlightenment’ open proceedings with visions of a bright-eyed utopian future, all fuzzy melodics and warm synth pads. Fans of the twitchy and sinister should head straight for Spinn’s ‘Don’t Shoot’, which subjects a tinny 303 line to a relentless collage of discharging firearms. DJ Manny brings the hustle with his mellow paean to dope, ‘All I Do Is (Smoke Trees)’, but Traxman takes the prize for gangsta savvy with the coldly confrontational but irresistibly funky ‘We Are Da Best’. After giving this a listen, it’s a sentiment you’d struggle to disagree with.