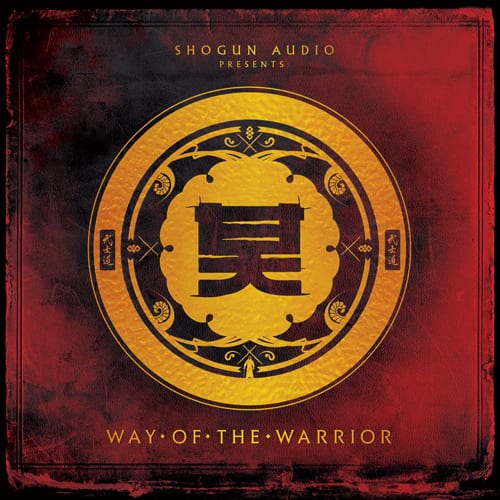 Since 2004, DJ Friction and K-Tee’s Shogun Audio imprint has tirelessly pushed innovative, prototypical drum n’ bass. It has issued countless classics by some of the most prolific artists of the scene, including Spectrasoul, Alix Perez, Icicle and Friction himself, as well as the ever-brilliant Rockwell in more recent times. Shogun’s breakthrough artists of the past few years have perhaps had the most impact, often beyond the domain of dnb. It seems entirely appropriate that Shogun’s fiftieth release is a climactic celebration of the label, following on from the recent ‘Shogun Evolution EP’ series in a tense balancing act between hard dancefloor wreckers and smooth, experimental soul.

‘The Way Of The Warrior’ brings all of the aforementioned into the fray, as well as major players from the outside – including dBridge, Commix and Distance, into the mix. It illustriously showcases the broad vibes Shogun’s roster and its close associates have to offer, delving through deep, jazzy rollers and heavy, alien rave cuts with true conviction.

Spectrasoul opens the compilation with ‘The Gift’, lending their soft touch over Calibre-esque haunting pianos, a spirited vocal and their trademark clean, efficient breaks. D Bridge’s ‘Since We’ve Been Apart’ and Break’s ‘Trying’ move in a similarly silky vein. Foreign Concept and Bringa’s ‘Cemetery’ is a thumping one-two attack that set’s ‘TWOTW’s agenda as a two-pronged exponent of the label’s diversity.

Flagship artist Icicle makes three appearances; the first being ‘Alien Groove’, a perfect representation of the techno-injected brockout drum n’ bass that has made him a household name. His first collaboration with Distance, ‘Exhale’, is the LP’s sole 140BPM tune, but you’ll be hard pressed to hear a finer halfstepper this year. A maniacal ode to outer space, ‘Exhale’ is truly a massive production that drips with anxious menace. Snik’s third contribution, ‘Ultra Clean’, closes the comp, and features like-minded innovators, Commix, who resurface for the first time since ‘Recall to Mind’ for another mind-blowing, club-busting highlight. It’s a warped, cardio workout heavily stepped in the minimal, percussive groove of techno and the lofty bounce of dnb. Each of these tracks are a true personification of the futurism endlessly pursued by both producer and label.

Arguably the most important producer of the past two years, Rockwell, is also prominently featured on ‘TWOTW’ as the future of the label. In the short time he’s been active, release-wise, Rockwell’s inept vision and unfathomable prowess has seen his influence wash over not only Shogun’s aesthetics and roster, but also the wider sound of dnb and dubstep at large. ‘Rat Race’ is a hyperspeed ravebomb that snarls and veers with aggressive rambunctiousness, whilst ‘4U’ is a true reminder of his serious crossover potential; blending poppy melody with his insane use of silence as a rave propagator to maximum effect. Incredibly dense, uplifting and accessible, his sound is like none other.

Another architect of dnb’s minimal renaissance, Alix Perez, asserts his bombastic presence with ‘Exemption’ and ‘Montpellier’ (which also features a Shogun allstar lineup of Rockwell and Spectrasoul). ‘Exemption’ is like ’96 No U-Turn and Metalheadz on acid; running at breakneck speeds through a stellar arrangement of incidentals. True to the duality of his sound, ‘Montpellier’ is a jazzy number, with a lush piano refrain and elastic bassline resulting in a blissful soundtrack to the after hours.

As Shogun Audio continues to move forward along the forefront of experimental, dancefloor-focused dnb, it’s exceedingly ironic that it’s sonic direction has been most influenced by the occupants of a single household – Alix Perez and Rockwell (with Icicle also nearby). Now let’s just hope none of them moves out!