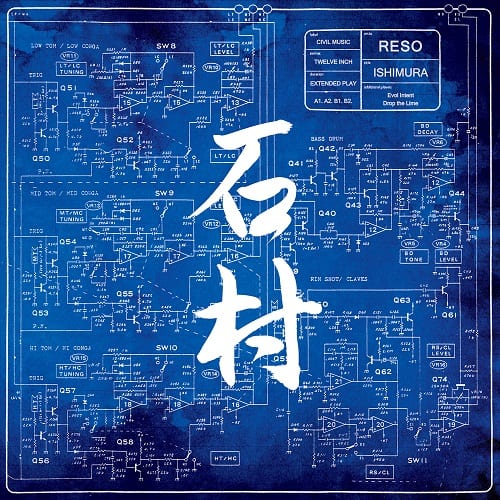 Emerging in 2008, Civil Music has courageously rejected any steadfast notions of genre. Instead the label / management company helps and nurtures the individuals they sign by exploring their artistic vision and by default, creating a motley crew of talented producers. Amongst their ranks and one of the earliest signings to the label, is Alex Melia aka Reso. His sound is diverse, but most would associate him with dubstep even though he was blazing trails when the genre was in its infancy. Recent years have seen him refining a certain style of hi-tech bass, drawing influence from an overindulgence in Manga animation, and an almost obsessive attention to detail.

‘’Ishimura” is the latest in a series of releases taking influence from Japanese artwork and imagery, and acts as an insight into Reso’s creative motivation. The title track opens with an ominous vocal sample before dropping boldly into an industrial landscape of sound and heavily phasing bass. Mechanized oscillations and heavily swung beats are the flesh and bones of this release, painting a bleak futuristic picture. Equally menacing, ‘Vanquish’ continues the alienating vibrations. Low-end rolling basslines are supported by incredibly tight drum-programming and micro-edits that give the track a real personality. Reso’s approach to sound design is dedicated and inspiring, creating a sonic signature that leaves his contemporaries floundering in his wake.

Remixes herald from Dnb aficionado’s ‘Evol Intent‘ and electronic producer ‘Drop the Lime‘. Keeping with the theme of Reso’s industrious originals, Evol Intent opt for more lashings of menacing bass with a hyped up tempo and heavily processed drum work. Less characteristically, Drop the Lime strips the track back to a minimal affair, embracing the atmospherics with his ‘Dark Tunnels Remix’. All in all, valued ammunition for any hard-hitting dubstep Dj’s arsenal, or if you are willing to look past the sheer grittiness and marvel at the impeccable construction, a tidy vinyl to own.