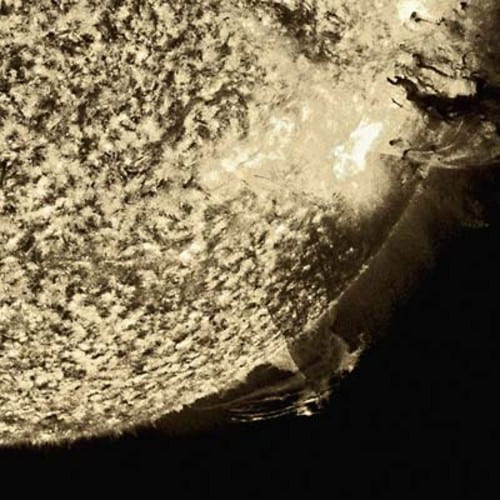 Electronic music is an apposite form to explore hefty emotional and existential concepts: as the form is a result of the careful sequencing of sounds and samples, the listener’s mind does not leap to imagine the human who sings or plays instruments. Freed from this human association, electronic composition gains a curious sense of objectivity: a complete product whose creation process is often incomprehensible, it can conjure the otherworldly, the fantastic and the terrifying in a way acoustic music cannot. As a tool to explore big themes it’s not just an appropriate form, it’s downright liberating – yet within the market-driven musical sphere one seldom finds artists who choose ambition, who try to explore themes beyond love-, street-, or club-life.

From the opening bars of Roly Porter’s new album, Life Cycle Of A Massive Star, it is clear that we are being offered something special. Following his work with pioneering dubstep duo Vex’d, Porter split from partner Kuedo to follow a darker, more abstract muse, fusing a clutch of genres from ambient to drone, dub to classical, culminating in his 2011 album Aftertime. Two years on, Porter’s second LP is an epic work, abstractly charting the creation and destruction of an interstellar body with an unparalleled sense of scale and emotional scope.

It may only last 35 minutes, but Life Cycle contains the richness of many albums three times its length, using its cosmic theme to open a dialogue on mortality, tacitly questioning the significance of the human when contextualised within an immense cosmic abyss. Sonically the album works through dualities, profound droney ambience set against emotive orchestral figures, alienating blasts of noise nestled against intimate string sections. Rather than exploiting the hoary trope of techno as man vs. machine, he sets the human against the void, and the results are utterly captivating.

The word ‘cycle’ is key here: not only does human life move in cycles, but through the album’s central dualities the acts of creation and destruction are shown to be inextricably linked, death portrayed as another stage of the life process rather than its opposite. Stunning opener Cloud contains clear human traces but its vocal sample is gravity-crushed, de-oxygenated and looped over a taut, juddering beat. The piece is astonishing to behold, gathering untold momentum as the beats jar like locked machinery, giving way to an ominous ambience that swallows those final strings.

Each sequence of Porter’s cycle is considered yet visceral, making an immediate impact yet still rewarding detailed listening over repeated spins. Gravity contains several movements, its frightening intro of whirring machinery set starkly against subtle strings which build to a nakedly beautiful climax by the track’s close, swallowing the listener whole in a wash of reflective melancholy. Birth begins with what sounds like a vacuum gasping in air, flares of sound evoking the primal forces of the universe, here contrasted with stirring woodwind and choral movements which create a mesmerising dichotomy. The hypnosis continues on Sequence, a softer procession of drones and distant orchestras which moves with the glacial pace of stoic practitioners Stars of the Lid.

For his dramatic finale Porter configures Giant, a petrifying piece where abrasive squalls of stomach-churning noise are set against sudden silence, leaving the listener alarmed yet wholly receptive, emotionally rent open by the unpredictable textures of the previous thirty minutes. It’s a wild ride, yet for all the space present on Life Cycle Of A Massive Star, it is not a work that exists in a vacuum. Its context is what makes the album shine, both sonically and galactically: brave sound calling out into the abyss, the human life cycle persevering despite worries of insignificance both cosmic and human. This LP contains a universal sound: a sonic black hole which buckles the listener, forces patience and openness, and encourages us to hear differently. It is an awe-inspiring achievement.