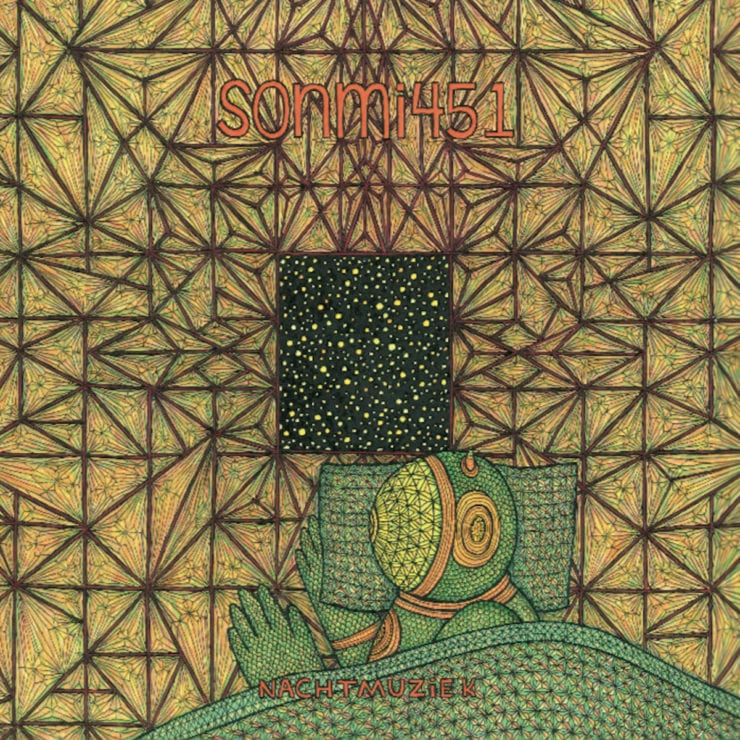 Astral Industries’ unlucky number dodges the curse of superstition, providing a touchingly human deep-space lullaby. Those initiated with the label will know to expect the quality — and naturally astral — sound chambers within, but Sonmi451’s personal take on the AI recipe will bring delight to many a new listener.

Continuing their reign of solid releases, the label stride onto their 13th with a rare new recruit in the form of Belgian producer Sonmi451. Taking his name from a character in David Mitchell’s “Cloud Atlas“, whose “aspiring efforts… to become enlightened are brutally oppressed by the totalitarian, consumer-driven regime that created and exploited her kind.” (taken from Sonmi451’s Discogs profile). Sounds familiar, doesn’t it?

If you’re actually seeking escapism from real life, have no fear: whilst the fictional eponymous martyr’s efforts for inner peace are crushed heavy-handedly, thankfully the real-life character takes you on a sedate journey towards that goal. Displaying deft practice at creating the kind of sonic landscapes able to take a quietly supplementary role in almost any situation, Sonmi451’s music acts as a pair of navy-blue filtered glasses over the too-bright sky of your surroundings.

“Night-music” indeed; this is heavy and soporific music, spacious and brooding. Immediately evocative of dark and peaceful night – not that fraught-ridden and anxious night practiced by other artists – Nachtmuziek takes a long 30 minutes to roll you up in a blanket and post you towards sleep, best demonstrated in the peaceful slumber of AI’s often-present astral-traveller.

Half-snatched dreamlike snippets of language waft throughout the runtime in echoing patterns. There’s American English mid-way through a tale, the questioning desu-ka?’s of Japanese, and others besides. This, alongside the use of identifiable strings and earthly instruments gives the release a distinctly human feel, as if Voyager 2 had developed a lonely soul during its long wandering through the stars and needed a tune to hum itself to sleep.

It is hyperbolically chilled out, and very characteristic of the Astral Industries “sound”, without falling into the trap of self-affirming the label’s identity through copy-cat tactics. Each track is carefully deliberate and in that it differs from the ambience of those who practice developing smoggy droning effects created from process rather than exact and intentional design.

Whilst delay and similar effects play a role, each instance is composed and does not fall into chaotic overuse. Neither does the album rely on the type of motorik propulsion — however soft — which can be found on some of AI’s other releases, such as “In A Garden Of Eden“, from the album of the same name.

‘Nachtmuziek’ LP is scheduled for release in vinyl and digital formats 1st April 2019. Order a copy from Bandcamp.

Discover more about Sonmi451 and Astral Industries on Inverted Audio.