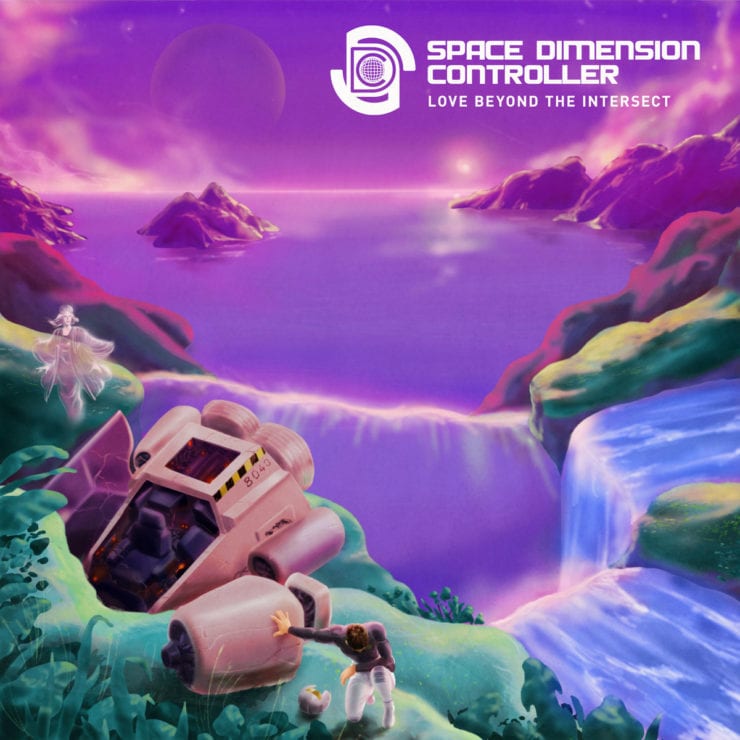 In 2013, Jack Hamill – aka Space Dimension Controller – released his electro- and funk-infused concept album, Welcome to Mikrosector-50, on R&S Records. Coarse, grainy and saturated with hiss, Mikrosector-50 established an enthralling and at times amusing sci-fi world, inhabited by bass-voiced purveyor of funk, Mr 8040.

Mr 8040 returns once again as the protagonist in Hamill’s new follow-up album, ‘Love Beyond The Intersect‘. This time, he journeys to escape a planet he crash-landed on following a ‘space dust and vecta grog fuelled burnout.’

‘Love Beyond The Intersect‘ is a refined and elegant adaptation of the Mikrosector-50 sound; slick, polished production replaces a lo-fi aesthetic, and Hamill opts for a dreamier palette. ‘Slowtime In Reflection‘, ‘Sundown On Memory Point’, and ‘Voices Lost To Empty Space’ feature sizzling electro synths and Metro Area-style basslines, accompanied by lush background textures and jets of white noise.

A vocoder is also introduced in tracks such as ‘Gifted Sentience‘, where mechanistic vocal melodies interweave perfectly with sensual whispers, airy pads and pulsating lead lines. Vintage deep house flute even makes an appearance in ‘Early Steps‘, where it is coated in generous reverb and given ample space to sing.

The sound design is impressive too. ‘Intersect Encounter‘, a drifting, Eno-like ambient interlude located at the album’s halfway point, is a detailed and thoughtfully assembled collage of drones, wandering melodies and sparkling pointillist bleeps. The final section – in which a solitary whisper punctuates quietly lapping waves of white noise – is especially beautiful. Similarly, the dense fog of noise, twitching glitches and generator hum in the introductory ‘Burnout (Dawn)‘ provides an atmospheric opening.

Hamill’s new album is also more focused. Mikrosector-50 featured ersatz 80s advertisements, robot dialogue and VHS title sequences, but ‘Love Beyond The Intersect‘ dispenses with these sorts of asides. Hamill appears more concerned with musical cohesion than he is with creating an immersive world, and the album is stronger for it. In my view, the narrators’ voice on ‘PVLN‘ and ‘Alone In An Unknown Sector’ should have been dispensed with as well; the deep, penetrating vocals only distract from the muscular, deftly-constructed tracks underneath.

The poignant title track, ‘Love Beyond The Intersect‘, relaxes the tempo and concludes the drama with a bouncy groove and a chord progression that wouldn’t go amiss in pop. Every element of this track – from the woozy synths to the drum machine embellishments – is charged with expression. As the track slowly fades, Mr 8040’s ship lifts off into the night sky, and its lights become one with the stars. Who knows when, or if, he will return.

‘Love Beyond The Intersect’ is scheduled for release 15 November 2019 via R&S Records. Order a copy from Bandcamp.