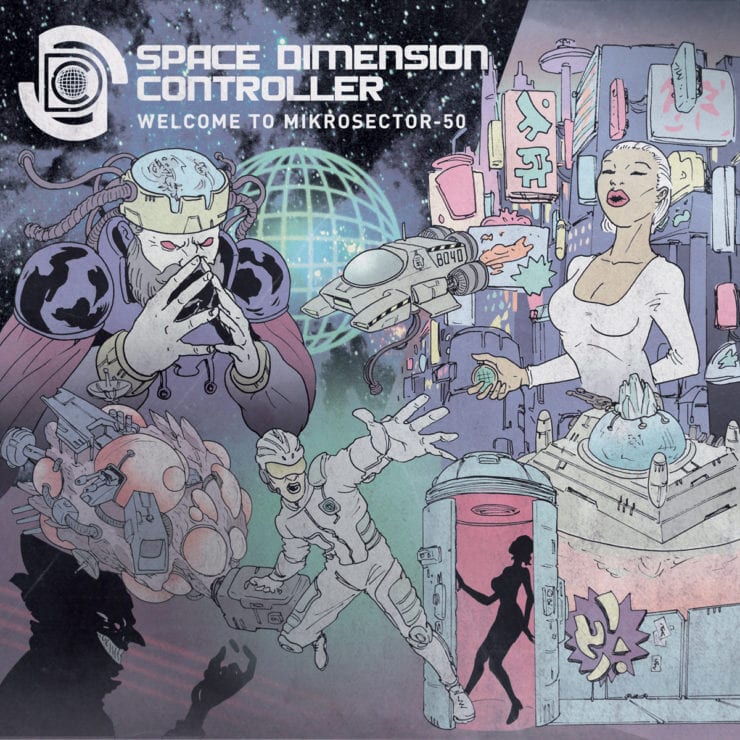 Space Dimension Controller a.k.a. Jack Hamill is no stranger to outer space. He’s been nurturing his self-described brand of ‘galactic funk’ throughout most of his productions, and R&S must have liked what they heard on his Temporary Thrillz EP because they’ve asked him back for what has been billed as his first proper full-length, the intriguingly titled Welcome To Mikrosector 50.

As with his previous concept mini-album, The Pathway To Tiraquon6, we are transported to a funked-up otherworldly dimension, as we follow the travails of a certain Mr 8040. As such, all of the vintage sci-fi b-movie trimmings are all present and correct; lonely protagonist cum narrator, foreboding synths and a threateningly autotuned voiceover that is oddly reminiscent of Arnie in Total Recall. These touches may appear objectively gratuitous, but it’s all part of a broader picture that Hammill is painting, with cinematic influences ranging from Star Wars to the hilariously tongue-in-cheek Garth Mranghi’s Darkplace. As for the narrative itself, it certainly can’t be accused of half measures:

‘Prior to leaving for Earth, Mr8040 witnessed the oppressive Microsektor 50 Law Federation enforce draconian measures on his planets people, consequently banning all forms of music. Traveling back in time to Earth was his only hope of saving his planet and our future. Having finished his LP and with reports of his philandering ways causing havoc with the space-time continuum, Mr8040 must now make the long journey forward in time to find out if his galactic funk prescription has saved the Universe’.

In an age of eyes down, chin stroking and head bobbing, it is refreshing to encounter such a shamelessly care-free concept, accompanied by song titles such as ‘Confusion On The Armament Moon (Answers From Max)’ and ‘ A Lonely Flight To EroDru-10 (Arrival on EroDru-10)’.

Whether Hamill is a fanboy of genre movies or not isn’t really pertinent here; Welcome To Mikrosector 50 is a singularly ambitious project, but one that may equally prove divisive amongst club-goers, such is its reluctance to bear any semblance with its contemporaries in employing such a direct cinematic sensibility and deliberately bloated nature.

Despite this, we encounter a smorgasbord of sonic palattes throughout Mr 8040’s journey around the universe. We are presented with a mix of glossy acid house that recalls Lone’s opus Galaxy Garden, and Dam-Funk-esque cosmic prog-electro that is draped over a new-age setting not dissimilar to Vangelis’ score for Blade Runner.

As enjoyable as all of these disparate strands of influences are, it’s not always an easy listen, with track times regularly breaking the seven-minute mark. Yet taken as an one entity, it is difficult not to call Welcome To Mikrosector 50 a success. How resounding and rewarding a success hinges on the listener’s willingness to embrace and engage with such a high-end concept.