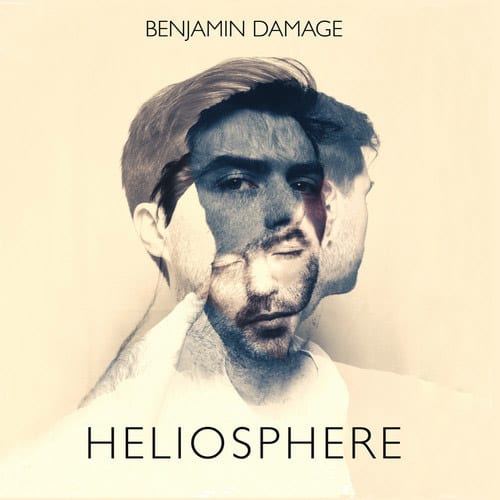 Benjamin Damage’s debut LP for 50Weapons, the excellent They!Live collaboration with Doc Daneeka, showed last year exactly how a dance album should be made: with care and craft, a razor-sharp eye for mood and details, and a sense of narrative coherence that still manages to evade most dance producers on their debuts. While it offered little music that could be described as revelatory, it was a confident, immensely listenable success. For his first solo outing Damage pulls off the same trick again, albeit with a stronger techno bent, offering a gorgeous album which, while it may not feel hugely innovative, martials its influences into a slick package that’s a perfect LP for the dance-heads when they’re at home.

This emphasis on home-listening, providing an interesting arc for the listener to follow rather than disjointed singles, is where Damage really excels on Heliosphere. The low-key cuts outnumber the dance tracks, a selection of impressive and sonically varied atmospheric pieces which draw unlikely parallels with the likes of Boards of Canada or Luke Abbott as well as the expected references to the Berlin techno set. Opener Laika’s sunken kick and drowned snares are only an anchor to the deep ambient wash and syrupy synths that create an atmosphere grounded in mood rather than propulsion. Later on Light Year colourful synths streak across a bed of increasingly aggressive percussion, filtering bass switches and dubbed-out claps building to a solid groove of hard snares and sharp synth accents that results in an intoxicating fusion of styles.

Damage’s willingness to experiment with different sonic textures is a fantastic success, hear the barely-there kick and analogue hiss of album highlight Spirals which is then accentuated by a threatening acid line that becomes more viscous as the tracks wears on. The analogue vibes are continued in fine radiophonic style on follow-up End Days, where shifting synths are applied like thick treacle over a restrained set of textured percussion.

While They!Live showed a clear talent for combining powerful rhythms with emotive melodies, on Heliosphere Damage proves himself more than cpaable of tackling each independently to achieve impressive results: while the ambient cuts offer moody, hypnagogic melodies for the soul, the album’s front-end is loaded with tough rhythmic work-outs for the body. These come in several flavours: Delirium Tremens is a rugged scifi techno workout, bridging the genre’s past and present with a sure-footed knack for the groove. Penultimate track Swarm (released late last year as a single) abandons melody even further, taking shape as a Shed-referencing no-nonsense slice of big room techno. Damage’s experimentations within the area of club techno are also interesting: Extrusion takes shape as a spare, twitchty stepper, with mysterious noir chords referencing grime and the Keysound stable before a serrated android bass swipe takes centre stage.

That Damage is at his best when combining these influences is clear on the album’s excellent standout, 010x. Here a standard techno build is masterfully subverted by ringing house chords, more dream-like than euphoric, which are a natural fit for that driving 4/4. It’s an imaginative and impressive statement, as is the majority of the album. By the time the syrupy, meditative closer Heliopause is reached, the listener has been taken on a real journey by an artist with a confident voice and an uncommon ability to lend an album real narrative without resorting to drastic genre changes or surprise collaborations. Nothing on Heliosphere is going to change the face of dance music, but this is partly its charm: it remains a modest, impressively polished gem that will keep listeners coming back just to take it all in.